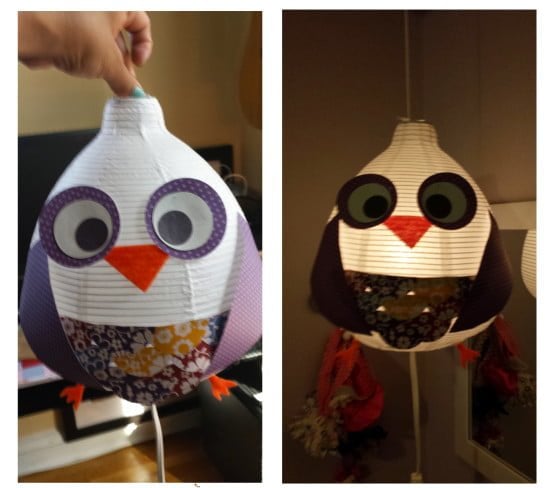 My daughter needed a night light for her room. The small plug-in-the-wall ones just didn’t provide enough light, so I was looking for something cute I could hang that could provide more light without being to expensive. IKEA had a few children’s wall lamps, but none that I really liked for her room. I saw the VATE paper table lamp ($9.99) at the store and thought I could make it into something cute. Here’s what I did:

Using a circle cutter, cut circles out of black and white construction paper for the eyes. (2″ for white, 1″ for black)

Cut 5 more 2″ circles out of 4-5 different colored scrapbook paper, then cut the circles in half for the “belly feathers.

Draw a wing-shape on the back of a purple dotted scrapbook paper (purple is the main color theme in her room) and folded the paper in half, then cut out the drawing so I ended up with 2 symmetrical wings.

Cut out 2x 2.5″ circles out of the same paper as the wings

Cut out a triangle and “feet” out of orange felt

Using a glue gun, glue the eyes on, followed by the orange triangle for the beak.

Glue on the wings

Glue on the orange feet

Hang from the ceiling with a screw hook and ribbon

Plug in and enjoy!