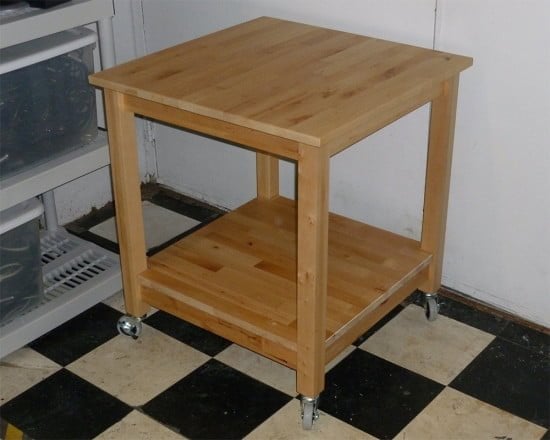 I wanted a rolling kitchen island, but couldn’t find one that was suitable at Ikea (or elsewhere). I found the Norden table, and it was the exact size I wanted. Rather than just put casters on it (which could have easily broken the legs), I took a second Norden table to strengthen it and add a shelf to it. The second table was cut down, and notches were added to allow it to fit around the legs. The legs themselves were drilled out and the dowel pins were installed from the bottom (as well as the top).

Nearly all the components of both tables were used, aside from the second set of legs, and the foot caps. I also wanted the table to be on wheels, so I used brass wood inserts and threaded on some nice rolling casters I bought at Home Depot.

Since the Norden tables are solid wood, this thing is extremely sturdy. There are a few things I would do differently if I had some jig tools, such as add dowel pins to the lower shelf. I’d love to see Ikea make something like this in the future. I’d buy more of them to use as mobile tables!