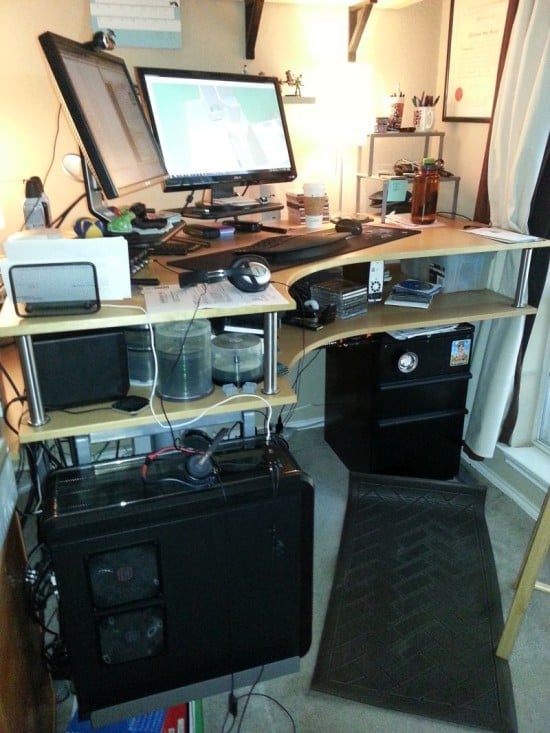 My fiancee and I share a home office using mirrored Galant desks; we’re both big fans of standing desks though. She dropped a bunch of money on a Kangaroo Pro stand that elevates her keyboard and monitors, but I wanted to raise the entire workspace. I considered a number of options for raising the desk surface including bed risers under the legs (I have the t-legs on my desk) but I wanted something sturdy and decent looking (i.e., no cinder blocks under the feet).

Since IKEA no longer sells the Galant desk I started scouring Craigslist and a week ago found exactly what I was looking for: someone was selling only the desktop – no frame, no legs, just the desk surface; additionally it was the exact orientation I was looking for.

I picked up two packs of 8″ Capita legs and attached them to the bottom of the new desktop, space at all the corners and between, with two more towards the center for support under where my monitors would sit. I then placed the new surface on top of the old desk. I considered getting sticky pads for the feet of the Capita legs to make sure the new surface wouldn’t slide around on the bottom one, but the weight of everything seems to be holding it in place. An added benefit is that I have a huge amount of storage space between the two desktops now.

I was also able to find a Summera computer holder on Craigslist, which I used to move my CPU out from under the desk – the computer was intruding on my foot space. Unfortunately the Summera did not come with any of the needed screws or bolts, but I was able to find suitable substitutes at Home Depot and with a bit of elbow grease was able to secure the Summera to the Galant frame. It’s working great now!