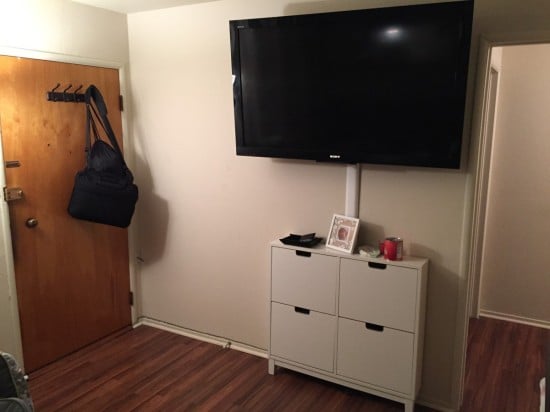 My wife and I just had our first child and so space is now at a premium. The design of our apartment has the front door opening onto one of the walls of the living room, which was a major constraint in how we could lay out our room. The only piece of practical storage I could find for that wall that didn’t disrupt the flow from the front door was the STALL tilt out shoe storage bin. I loved the slimness and functionality of the Stall unit, but it still left a great deal of open wall underutilized above it. It occurred to me that our TV could be mounted on the wall and the unit could be used as a media cabinet of sorts.

For my Entertainment Center I have a cable box, wireless router, Mac Mini, External Hard Drive, Nintendo Wii and a PS3. The Stall (or Hemnes) shoe cabinet had plenty of space to contain these objects along with a couple of surge protectors and game controllers. Access to all of the devices is easy. Wiring is messy, but blissfully concealed when closed. 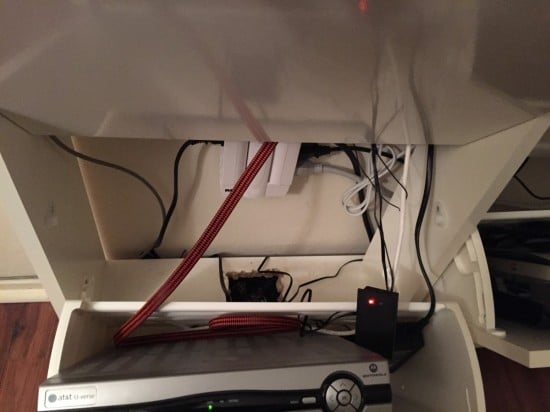 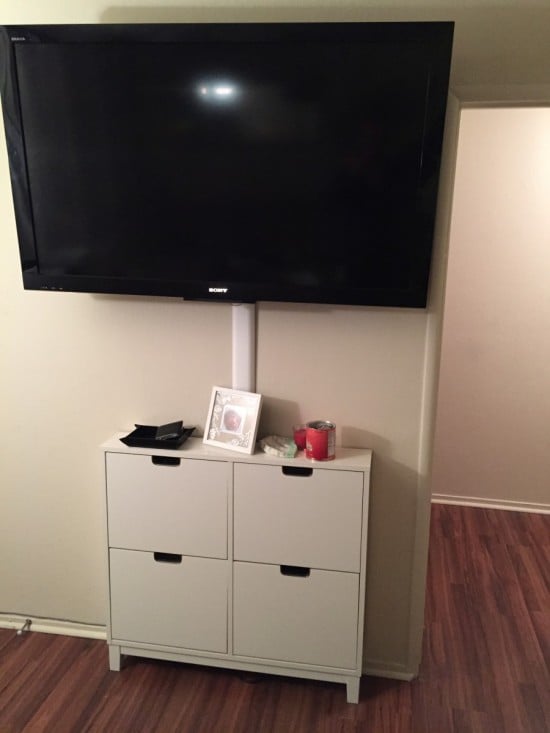 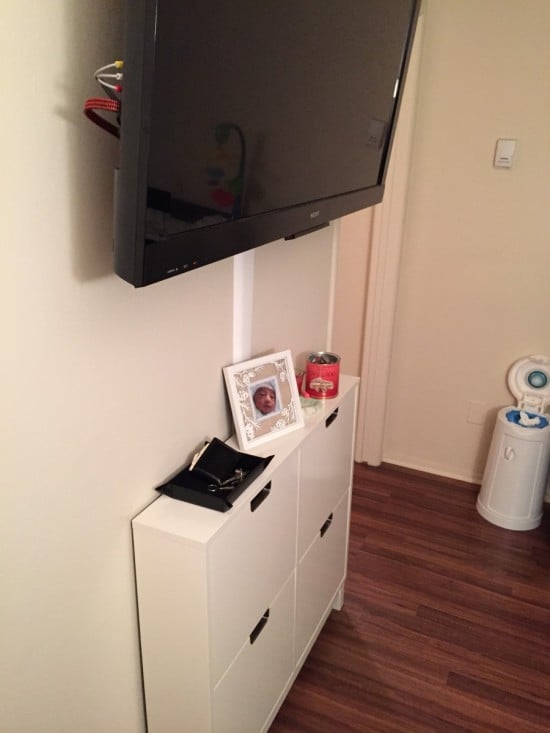 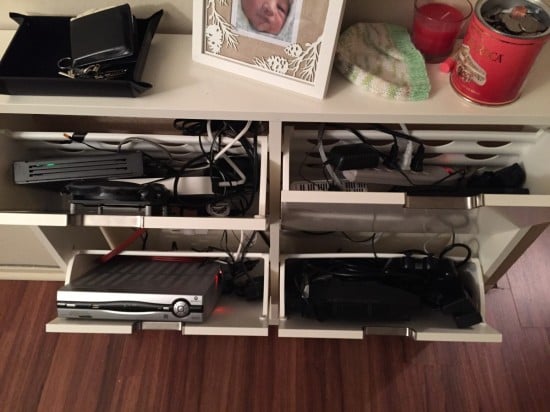 My bright little idea was a go but for two small problems encountered when the cabinets were closed:
The signal from my remote control to the cable box could not go through
The unit was not well ventilated, causing many of the devices to run a little too hot.

And so, here are the small modifications I came up with to address these issues and make this a fully functioning media cabinet:

The Ventilation issue was also a fairly simple fix. I bought a thermally controlled fan cooling kit to install. Many kits will do, I went with the Coolerguys Cabcool 1203 Three 120mm Fan Cooling Kit w/ Thermal Control for Cabinet or Home Theatres because it had everything I needed in one package. How To Geek has a nice blurb on the components needed for one of these if you want to source the parts yourself.

The idea was to set two fans into the bottom of the box blowing cool air in and a 3rd fan at the top blowing out the hot air as it rises. For this reason it’s better to use the Stall line of shoe cabinet rather than Hemnes as Stall has small openings in the cabinets in place of handles, which provides a little extra ventilation (it also makes it a tad narrower which for me is always a plus):

I used 4 simple wood screws for mounting each fan (got them out of the Ikea picture hanging kit of screws and anchors, though any screws will do). I left about a half inch of space when mounting the fan onto the top cabinet to allow a little more air flow. The resulting air flow out is not massive, but it’s enough for my devices:

Next, I measured and cut some square holes into the bottom of the unit (about an inch smaller on all sides than the size of the fan). I originally thought to drill multiple holes but decided to cut them out. It looks messy but never gets seen with the finished product:

Mounted the two fans on the bottom of the unit and put the Thermostat component in the top left cabinet (the one that runs hottest):

And presto, a fully cooled, super skinny storage solution to contain all those messy media devices:

I used the Uppleva Cable Cover Strip and wall bracket for the TV mount.

A couple of notes:
These cabinets may not fit standard sized DVD/Blu-Ray Players. I use my Mac Mini and PS3 for DVDs and Blue Rays respectively so this wasn’t an issue for me. But worth measuring your devices before you build.
I was also lucky enough to have a wall outlet directly beneath the TV and in a position that matched the open space behind the bottom left storage drawer. Not critical as it’s certainly possible to run an extension cable in from the bottom of the unit. But certainly makes it cleaner if you can plan to encompass a wall outlet.
The cooling kit I bought can accommodate a 4th fan if you want to mount one behind the other top handle. As the devices on the right side of my kit were not being used regularly I did not bother getting the extra fan.