So, I wanted to convert my 1 x 4 KALLAX into a retro games console unit. I have my first baby on the way so we had to make some changes downstairs, but I didn’t want to just put all the consoles and my LEGO models

in the loft. I decided to renovate the box room whilst remodelling the soon-to-be nursery.

I love the simplicity of the KALLAX and it was the perfect size for my needs. I wanted to try and make it look like a media unit though, not just a KALLAX lying down! So, the first job was feet. I got some softwood from the local timber merchants, and cut the ends at 45 degrees. I then took some sandpaper to them and sanded all the surfaces until they were smooth. The longest edge of each foot was 200mm. The rear feet are just square cut. 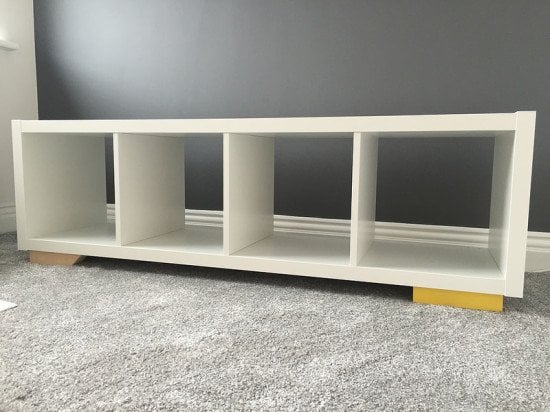 As the room is grey and white, I toyed with painting the feet yellow but decided against it. I fitted the feet using woodscrews which were countersunk to avoid damaging the carpet. There was a small gap between the top edge of the foot and the bottom side of the KALLAX as the base of the unit over hangs ever so slightly. I could have inset the feet but I wanted them flush with the ends, so I masked up the unit and feet and neatly filled the gap with decorators caulk. 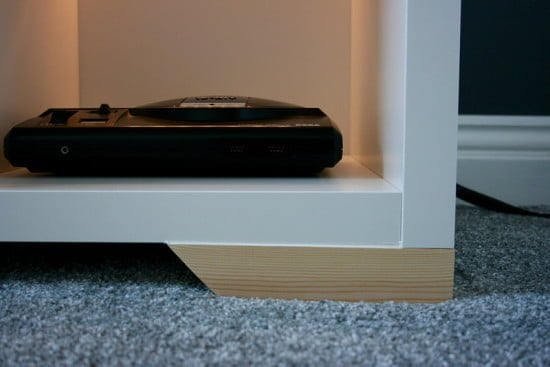 The next step was to fit a back to the KALLAX to hide the consoles wires. This again was purchased from the timber merchant. I measured the KALLAX edge to edge (height and width), rounded the number down by a few millimetres (so the backing wasn’t quite flush with the edges) and asked for some white hardboard (about 3mm thick) to be cut to that size. I then laid this on the back of the unit, drilled and countersunk each corner, and screwed it in place.

Next was modifying the fittings on the LEDBERG LED’s. I have modified the wiring on several of these before so that I could run them individually as opposed to joining them all together. I could have just bought the Dioder set which has 4 individual LED strips, but I had lots of spares left over from previous mods, so used up what I had left. 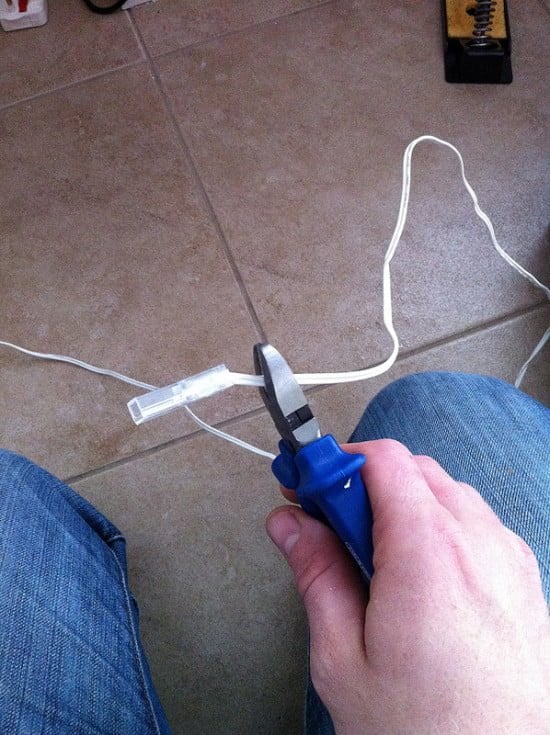 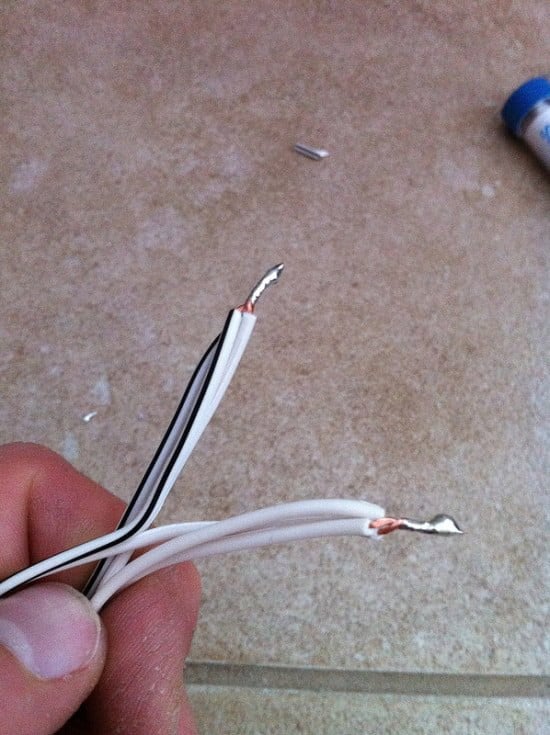 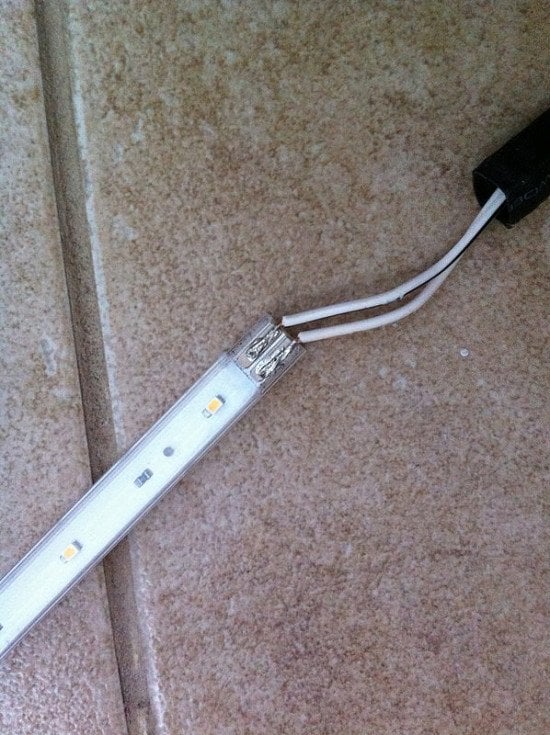 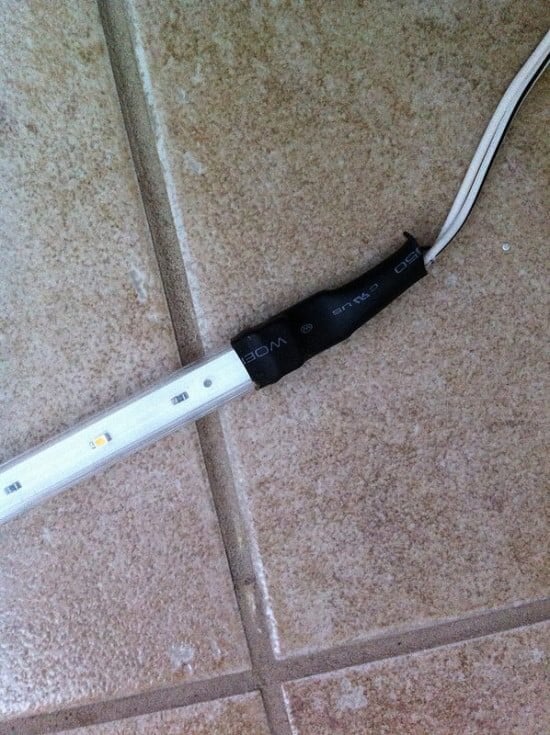 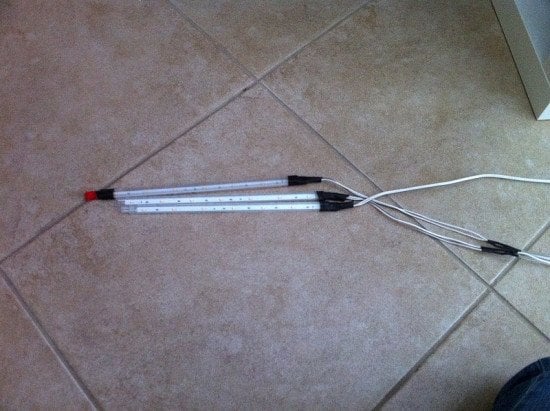 You can only use 3 strips off one transformer, so there are two sets in this hack. One set to light up 3 cubes, the other 3 to light up the end cube and the two rear LED’s. I simply cut the connector off the wire. I separate the wires, stripped a little of the sheath off and solder the tips. I then use a small handsaw to cut the plastic off covering the connectors on the LED strip. I solder a length of wire to each connection (I use speaker wire as it is only 12v passing through it, and is no different to the wiring used on LED kits for modified cars), making sure positive is the wire with the stripe so not to confuse when wiring up. I then slip a little piece of heat shrink over the solder to cover it up. For this hack however, I had enough of the original connectors left over from previous modifications to solder these to the strips of wire, so this is what I did for the 4 cubes. The two rear LED’s are soldered directly to the wiring. I then pop a little connector block on to the main wiring, and slot the other 3 pairs into the other side, and voilà! I completed this for both sets of 3. I then used the clips that come with the LEDBERG to fit them to the top of the cubes. However, rather than use the tiny IKEA screws, I used my craft hot glue gun. 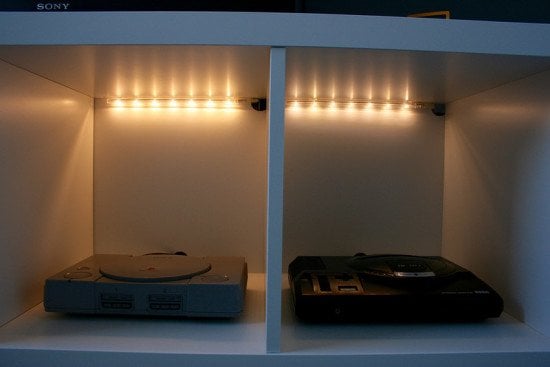 The next job was to feed the wiring through the hardboard. I cut a 30mm hole in the top corners of each cube. I put a pencil mark in the very top right corner of each cube, removed the hardboard and cut the holes. You have to drill from the white side, because if you drill from the non-white side, you could end up ripping the finish off when the hole saw comes through. I then proceeded to re-fit the rear to mark where I wanted the holes for the consoles wiring to pass through, removed, drilled, refitted.

Once the holes were all in place, I refitted the backing once again and set about fixing the rear LED strips to it and tacking the LED wiring in place to keep it neat.

Next comes the fun part: putting the consoles in! I gave it all a little polish first, fed the wiring through the holes, connected them all up, put the TV on top and hit the power. Hey presto, one backlit KALLAX gaming unit! 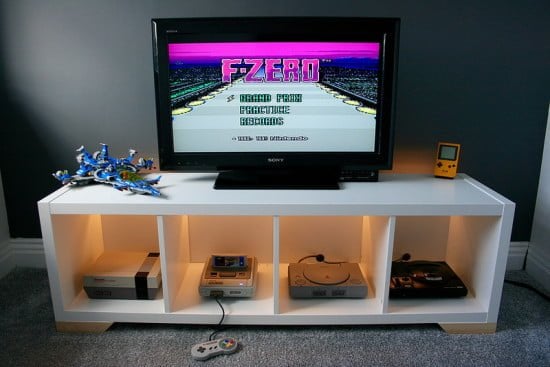 I’ve also added mini-feet and some flexi LED’s to the other KALLAX unit in the room (I’ve got two more LEKMAN boxes coming for the top two holes). Looking quite cool, literally! The wirings not the neatest but it’s always hidden so not an issue. I also added black craft card to the inside of the front of the LEKMAN to hide the drawer contents to keep it neat, and placed some drawing pins at the rear to stop the drawer running all the way through so it sits flush with the front when you close it. 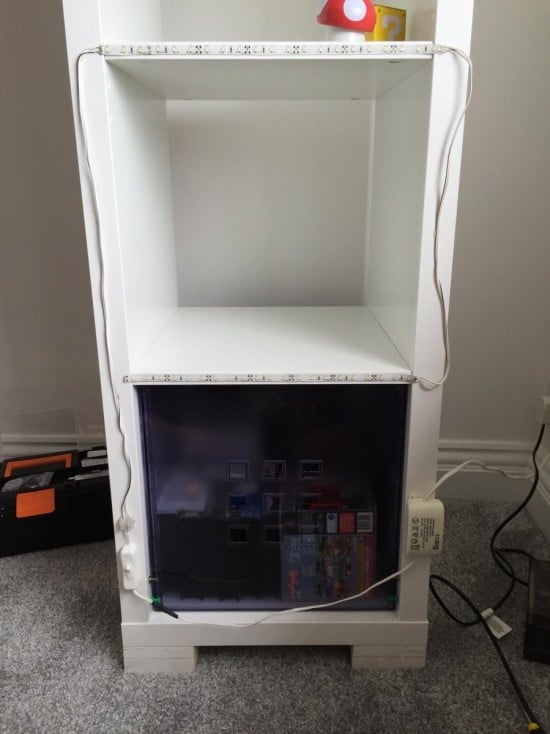 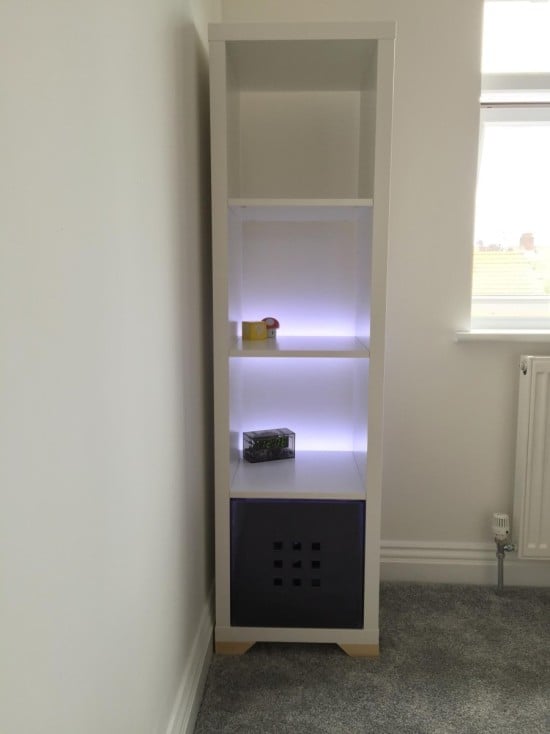