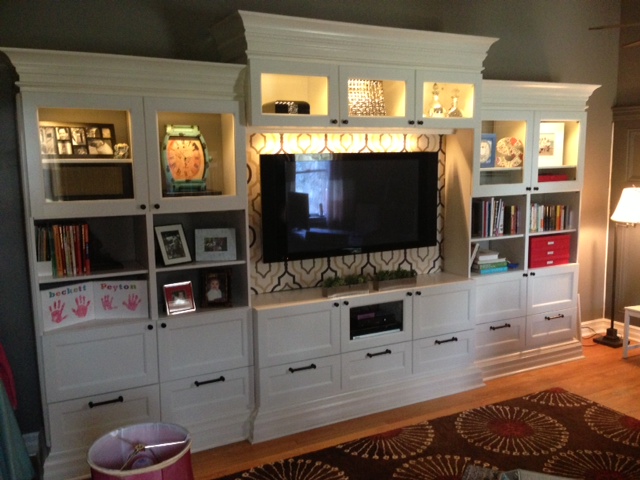 Description: My wife desperately needed some bookcases in her rather large home office, and I’m neither a carpenter nor rich enough to pay someone $8K for custom units. But, I’ve done quite a few trim projects around the house and have previously transformed some other Ikea pieces, so I figured I could buy some basic Ikea bookshelves and transform them as well, using a lot of moulding and incorporating some other features found in custom cabinetry.

Initially, we had wanted to use the Hemnes pieces for this project because they are solid wood and thus easier to modify and ‘dress-up’ (solid wood is easier to paint and nail into). However, the Besta stuff was on sale and offered more options, like soft close drawers, a variety of glass doors, etc. Moreover, there was a large Besta wall unit that had been created and displayed at our local Ikea, and it was very, very close to what we were looking for.

Because I wanted to create the look of built ins, I had to find a way to raise all of the pieces off the floor so the baseboard moulding would fit along the bottom. So, after assembling all of the bookcases/shelves and measuring the finished size, I built a base using 2x6s, and this framework was nailed to studs in the wall. I then placed the Ikea units on top of the base. I also nailed some 1×6 trim boards to the face of the 2x6s, to create more depth and a finished edge.

This is where I encountered my first snag. Turns out that the Besta drawers and doors are flush with the top or bottom of the units. This meant that I had to raise the bookcases/shelf units off the base that I had just built, in order to keep the drawers or doors from hitting the base or crown when opened. I raised the bookshelves/shelf units with 1×4 trim boards glued to the bottom of each bookshelf/shelf unit (except the bridge). I did this with the unit upside down, and when the glue dried I flipped it over and placed it on the base. 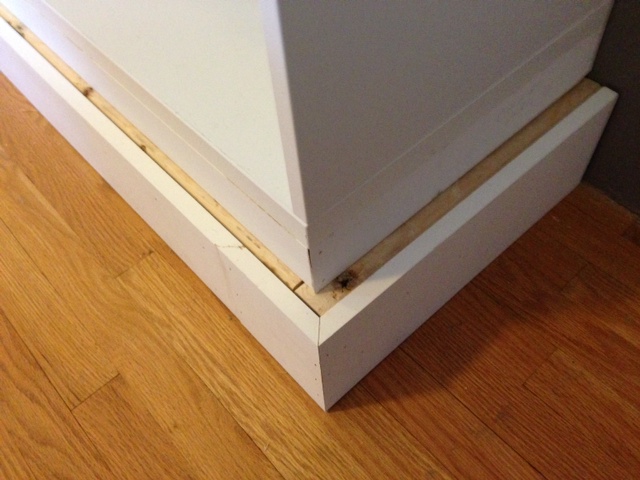 Permanently installing the bookcases and shelf units was next. I had spent some time looking at custom cabinetry at Lowes and Home Depot, and noticed that a lot of high end cabinet installations feature at least one cabinet that is taller/shorter, and/or deeper/shallower than the rest. I incorporated these ideas into my project by ‘bumping out’ the center shelf/bridge units 4″ from the wall, and the bridge was also raised about 4″ higher than the adjacent bookcases. These changes would create some architectural interest and allow for some really large crown moulding at the top.

Bumping out the lower piece was simple; I pulled it out 4″ and used construction adhesive to secure it to each adjacent bookcase. The bridge unit was more problematic. First, I had to glue the two pieces of the bridge together, because the bridge is only available as a single or a double. Thus, I glued a single unit to a double unit, to create one that was as wide as the bottom unit. Second, I had to find a way to ‘hang’ the bridge 4″ away from the wall. I did this by securing a two rows of 2x4s to the studs with large bolts, and then used the hanging brackets that come with the bridge to secure the bridge to the 2x4s. Worked like a charm! Sorry I don’t photos of this step. 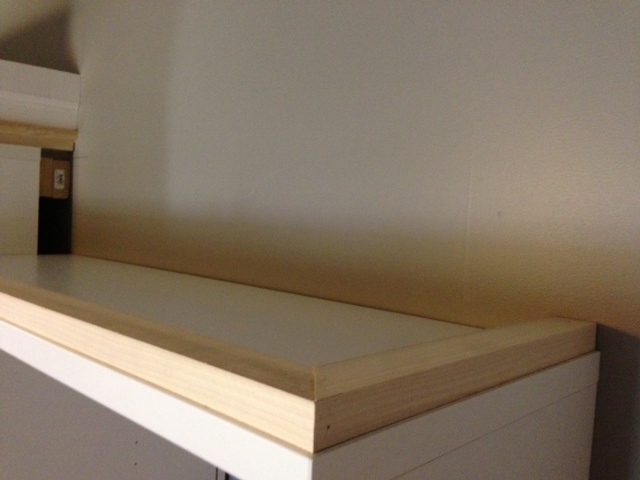 I like large, built-up crown, so instead of just using one piece of large crown I used 4 separate pieces. The first piece is a strip of backband moulding, which has a rabbeted lip on it and sits on the 1×4 trim piece. On top of that I glued and nailed a 1×4 piece of basic trim board, followed by 1×4 baseboard (inverted). Finally, I capped it off with a fairly large piece of cove moulding. In this photo you can see why I raised and bumped out the the center bridge – it allows the crown on the bookshelves to terminate gracefully into the ends of the bridge. I was very lucky that the terminated end fit so well. 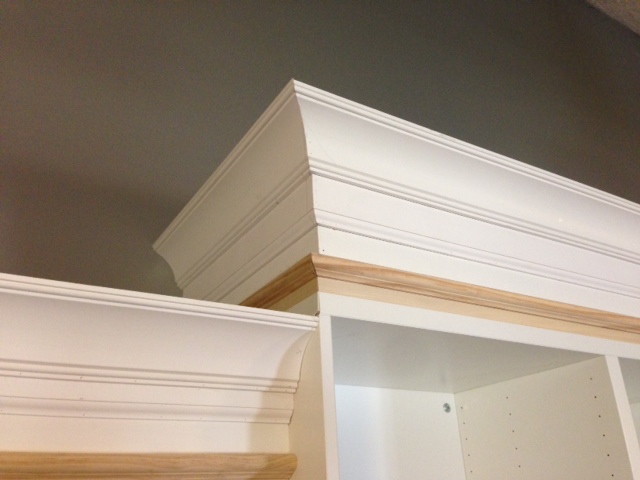 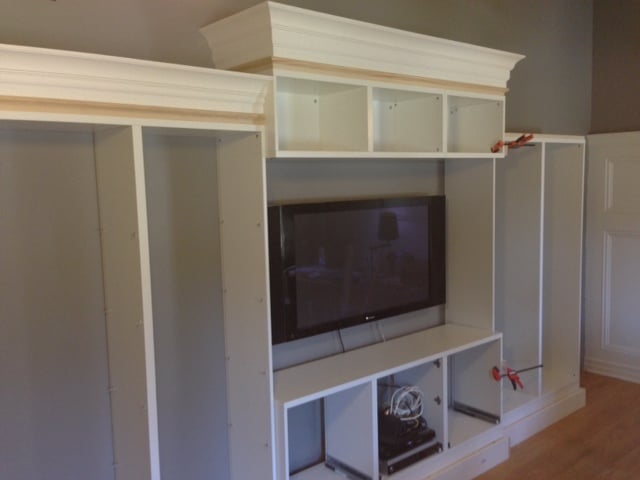 Wish I had photos of the base, because I think it’s more beautiful than the crown. I used the same 5.25″ baseboard and shoe moulding used in the rest of of the room, but I also capped it off with a chunky piece of cove moulding that covers the 2×6 that forms the base. The cove profile is the same as the cove on the crown, so it ties everything together nicely.

After all of the moulding was primed and painted (luckily, the white paint I used is nearly a perfect match for the white finish on the Besta pieces), I turned my attention to the area behind where the TV would reside. Initially, I had wanted to use some faux stone sold by Lowes, but my wife found some silk fabric that she wanted, so I took several yards of that and nailed/glued it to a piece of 2″ thick foam insulation board and pressed it into place behind the TV. With that behind me, I installed the drawers, doors, and installed Ikea Dioder LED strips in each upper cabinet. I also installed 4 strips above the TV, secured to the bottom of the bridge and hidden by a piece of moulding. All of the LED strips were connected to a switched outlet so they all turn off/on at the wall switch.

Took me nearly a month and almost every spare minute. Great result tho.