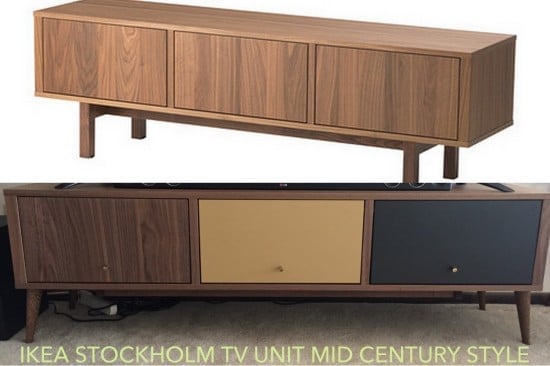 We needed a long, low TV stand for a new big screen so off to IKEA we went. We settled on the IKEA “Stockhom TV Stand” in walnut finish. From a functional standpoint is great but it’s cosmetically very plain hence my modifications.

First thing I did was remove and paint two of the three door panels. One in a mustard yellow that matches our couch and the other in a dark grey. The third door was left alone. The two doors were removed and primed with 2 coats of aerosol stain blocker/primer. Once the primer dried I used ordinary interior latex and applied 2 coats with a foam roller. The primer and latex dried fast and I was able to reattach the finished doors within a couple of hours. 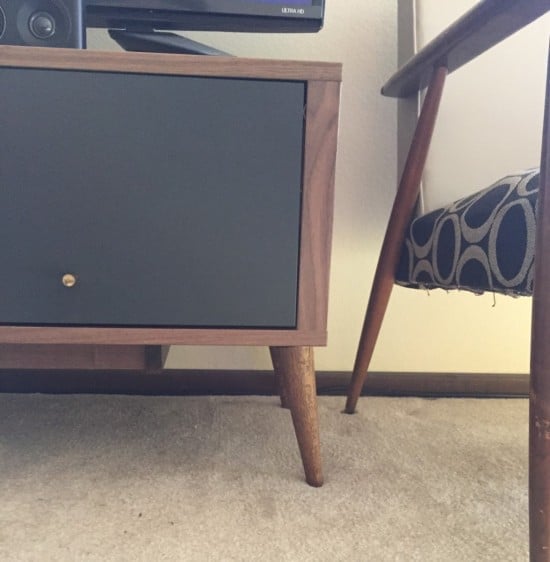 Next thing I did was search online for some midcentury drawer pulls and found some small, really cool solid brass knobs. Pilot holes were drilled and then larger holes were drilled and the knobs were then attached. These had to be mounted relatively low on the doors because the doors slide into the top of the cabinet space and out of the way. As it is now the doors stop about an inch and a half from being fully pushed in. This is of no consequence however. 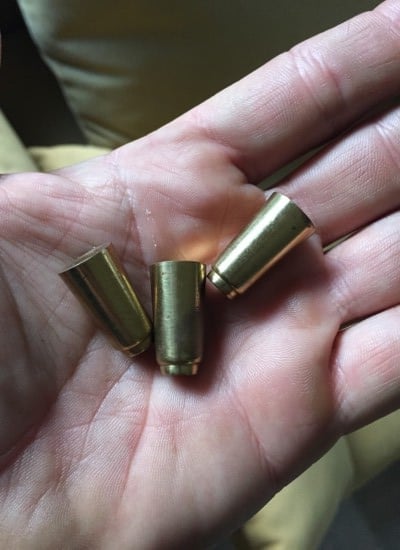 The last phase and most involved was getting rid of the original legs and fastening new, tapered midcentury-style legs. To do this I removed the solid wood framework underneath the stand that the legs are attached to. This entire assembly is solid wood (the rest of the unit is particle board) and provides support to prevent sagging. The framework disassembles into 4 pieces. 2 pieces with the legs and 2 long beams that attach to the leg units. The long beams are left unaltered. 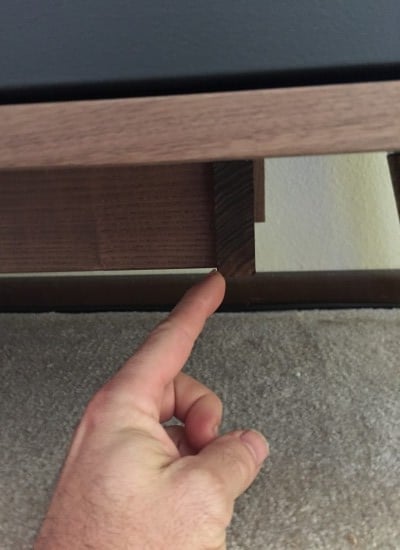 I sawed the legs off flush with the rest of the leg unit frame using a table saw and the small extensions that the legs were attached to. It was very easy to do and any saw would work fine. I then reattached the leg framework and the 2 associated beams. The two leg extensions that were removed left two white areas of raw wood that face the front so I used dark wood stain to hide that.

I found 4 tapered midcentury legs from an online supplier and the associated mounting brackets. I bought 8″ ones in red oak. These were stained with one coat of wood stain I had laying around the house and matched the veneer very well. Once installed, the length allows the table to come within a half inch or so of the original table height when using the angled brackets.The brackets can either be straight so the legs extend straight down or angled to give the splayed look. I chose the angled ones and have the legs angled to the sides. These particular metal brackets have four mounting holes and I placed them on the four corners so that at least 2 of the wood screws would extend up into the walls of the cabinet for better strength. Pilot holes were drilled first. I used two, 2″ deck screws for each mount. For the other two holes on each mount I used the screws supplied with the mount. These worked fine and didn’t pierce the floor of the cabinet.

The pics are of the original stand as it comes from Ikea, modified stand, pic of knobs, pointing to cut area of leg frame that I stained, and a few others. I didn’t take pics during the process which is why I have no pics of my stand once I originally assembled it. It was only later that I saw another much more expensive midcentury stand that gave me the idea to modify mine. After that, a buddy told me about your website.