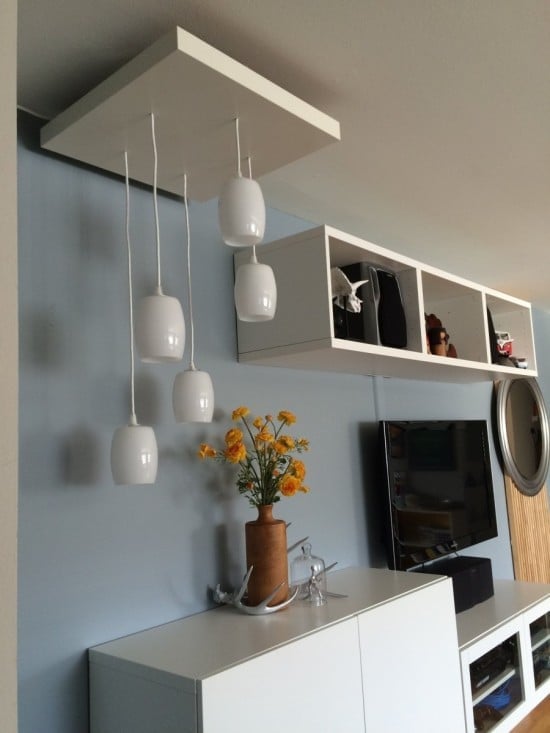 Problem: my apartment had exactly ZERO pre-wired ceiling lights, and one oddly shaped corner that was dying for good lighting.

Solution: a modern light fixture that fits in the corner and can be plugged into a wall outlet.

Inspiration: similar hacks on this site and others, including one done with Grono table lamps.

Problems to work around: I needed it to be relatively cheap, to look clean (with hidden wiring/screws), and still maintain safe space and air flow for the electrical components. I needed all this to also not be too heavy for the ceiling AND to take into account the inherent flimsiness of the LACK table. This required a LOT of pre-planning and a LOT of terrible draft ideas until I came to the final! 🙂

STEP 1: I decided on a pentagram sort of arrangement with five lights total, so I printed out a shape online and did some basic geometry to expand it to the size I wanted. I marked the equally spaced spots to drill holes. 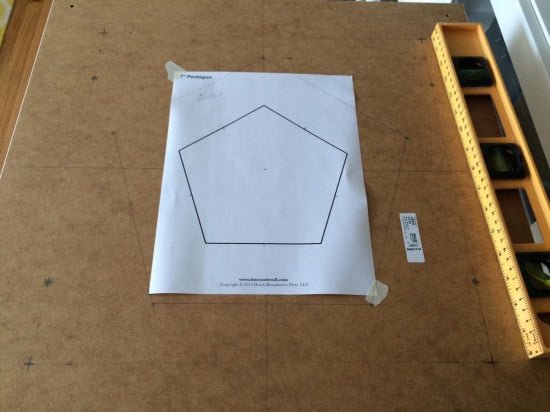 STEP 2: I then created a suuuuuper classy template from an old paper bag to mark where I wanted to place the hooks that would hold up the whole fixture. I did them in a rectangle formation so they wouldn’t interfere with my holes for the lights, and would be further from the front edge, and therefore less visible from the primary viewing point in the room. 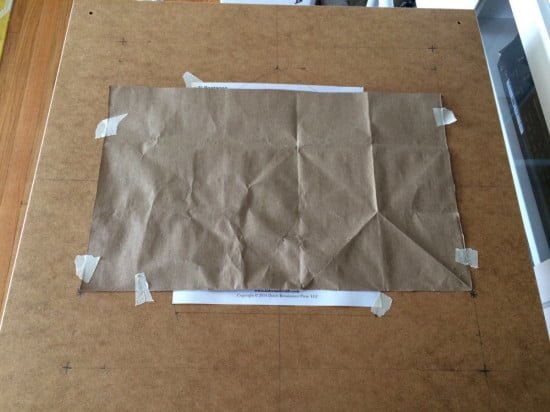 STEP 3: I transferred the template to the ceiling and used it to determine exactly where I wanted the fixture placed. I had to be careful to have it centered so all the hooks would be on ceiling studs (marked by parallel lines of blue tape) so they wouldn’t tear out the drywall and would balance the weight of the fixture equally. 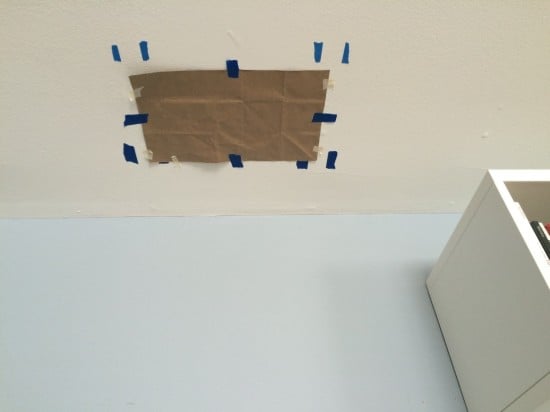 STEP 4: I marked the corners of the template and screwed in four #10 screw hooks from Home Depot. The hooks had long enough necks that the screw part would go in a full 1/2″ into the stud itself, not just through the drywall. Obviously I was concerned with making sure these hooks could bear the weight of the fixture. 🙂 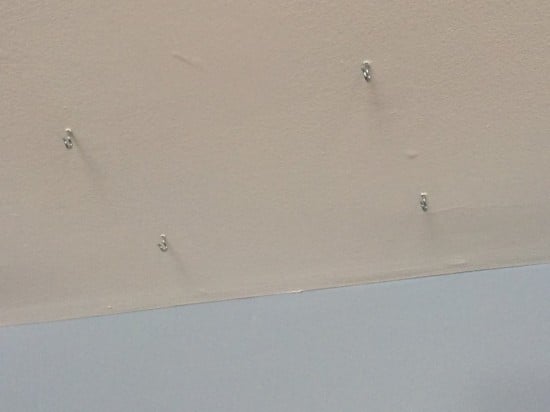 STEP 5: I then mounted these marine-grade loop… thingies… I found at Home Depot to the back of the LACK. I have no idea what they’re actually called, but apparently they’re meant to be screwed into a boat hull and used for tying off rope. 🙂 I just needed something that required more than one screw (to more evenly distribute the stress on the LACK table) and that would have a flexible loop that would allow a bit of leeway when putting up the fixture. I also picked out these crazy overkill screws that are basically screw-and-anchor-in-one so that I could get the most grip on the crappy innards of the LACK. 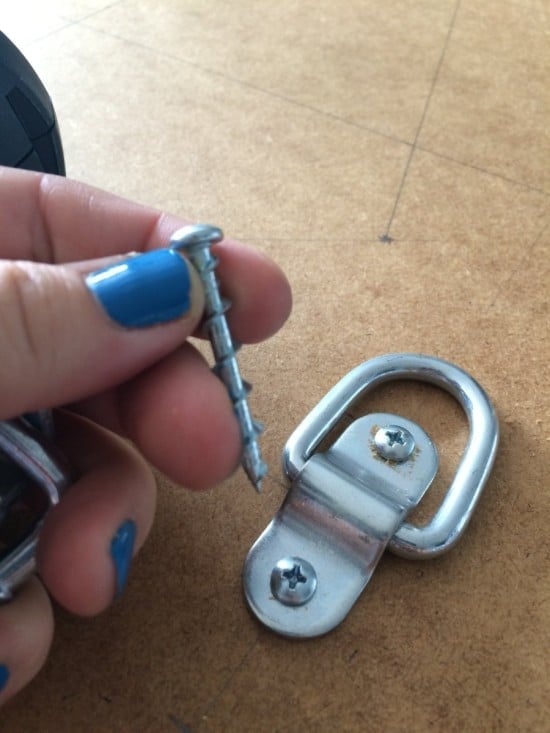 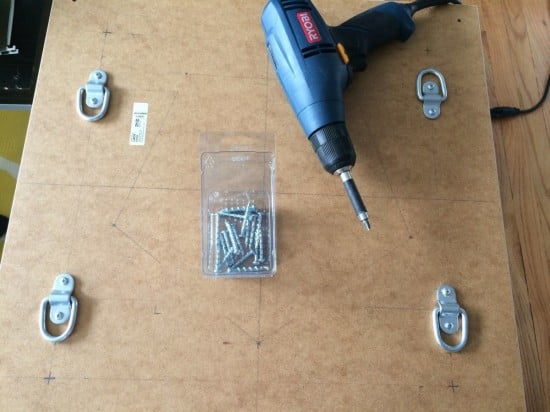 STEP 6: I double checked the placement of the boat loop thingies by hooking the table to the ceiling for the first time. I had to screw one or two of the hooks slightly further in so all corners were equal distance from the ceiling. 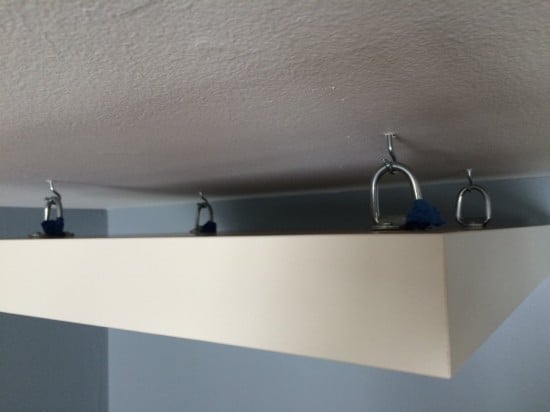 So now I had the basic framework of the fixture in place. On to the actual lighting/electrical.

STEP 7: I tested out all my drill bits on one of the spare LACK legs to see which ones were the right size and could make the cleanest hole. I found that putting a big piece of tape over each drill sit minimized the splintering of the LACK’s laminate. 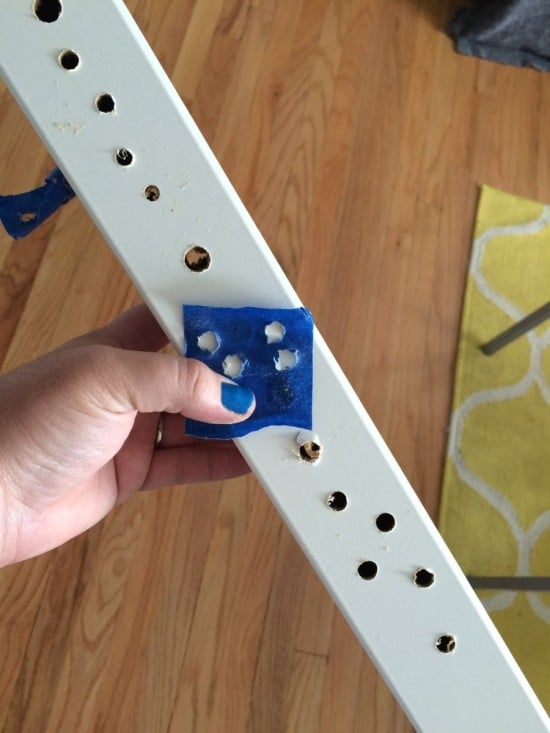 A 5/16″ drill bit ended up being the perfect size. By using the tape and drilling from the back through to the front, I was able to get decently clean holes for the SEKOND cords. 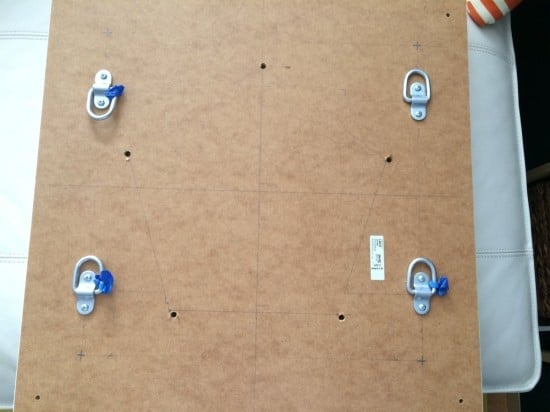 I cut off the plug ends of the SEKOND cords and taped it to be able to run it more easily through the hole. 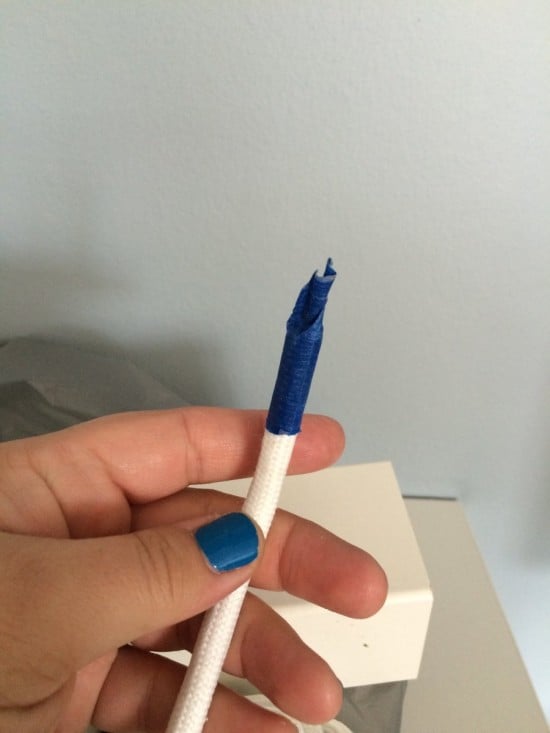 I ran the cords through, and determined the length of each cord I wanted hanging through the holes and cut off the extra (being careful to leave enough length to wrap around to the power strip). Also note: SEKOND cords are the ones with a braided fabric around the cord, so I made sure to cut the fabric far away from the plug (taking care to not damage the cord’s rubber casing) and used electrical tape to keep it well away from the replacement plug).

STEP 8: Here was the grotesquely difficult part of this hack (for me at least). I have exactly ZERO electrical knowledge, so I spent a very long time researching the safest, best way to put new replacement plug ends (easily found at Home Depot) on a cut light cord. I’m not going to detail how to do it here because I’m obviously not a certified electrician, but I’ll suggest watching a LOT of You Tube videos and reading a lot of tutorials until you feel confident you can do it safely! I practiced on the discarded pieces of cord until I could do it as accurately as possible, but that does NOT make me a professional. I’m a cautious person, so I never leave this fixture on for extended amounts of time, and never overnight or when I’m not at home. (CAUTION: People, it is better to leave the wiring to professionals than rely on Youtube videos! ~ Jules)

STEP 9: After putting the new plug ends on the cords, I placed a power strip in the empty space on the table and oriented my cords/plugs in the least complicated arrangement so that no cords were overly kinked and no new plugs were put under undue stress. I affixed it all with zip ties and duct/electrical tape (clearly I was exhausted and super lazy by this point, lol). 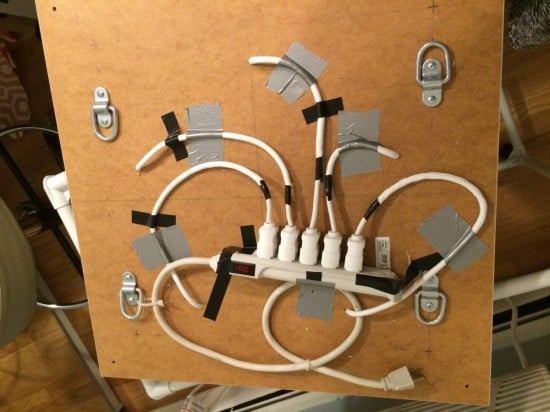 STEP 10: I plugged the power strip into a white extension cord and hung the whole thing from the hooks in the ceiling. I put the Vallmora glass shades on the Sekond cords and put in new light bulbs. I plugged the whole thing into a remote-activated plug, so I can flip it on from anywhere in the house. DONE! 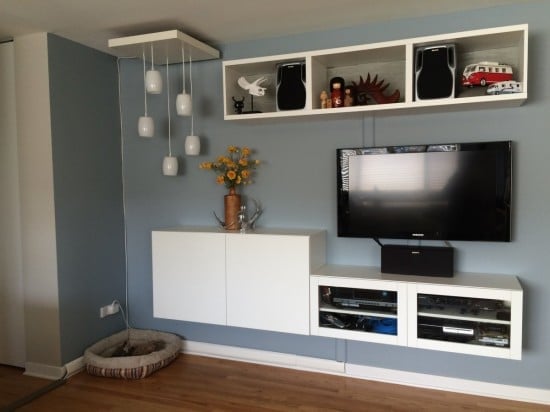 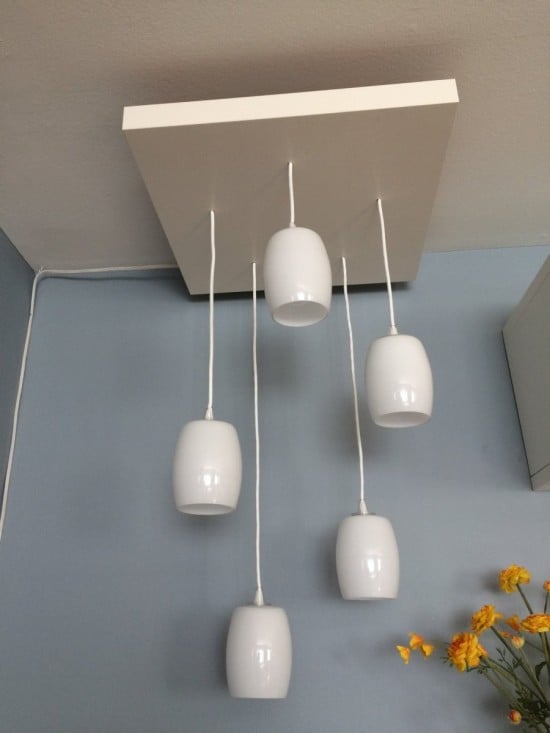 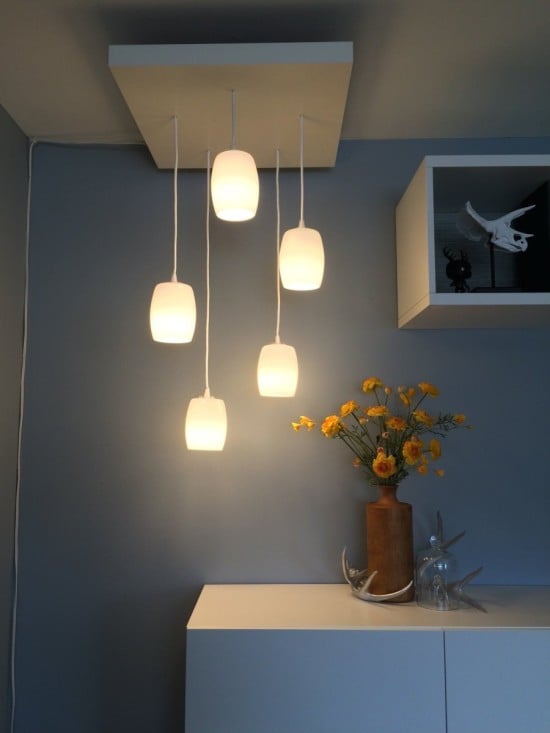 CONCLUSION: I adore how the final product turned out, and love it even more knowing all the time and planning I put into it. I’ve been an IKEA-hacker for years, and while this is by far my most complicated hack, it’s the one I love most too. 🙂