Do you channel an inner MALM or has a SÖDERHAMN within you? Well, you can find out right here on Buzzfeed. Just answer the 8 questions and the quiz will reveal your true IKEA persona. Much easier than a trip to the blue and yellow.

“You’re impossibly cute and always helpful, just like this adorable lil lamp.” Yup, that’s me. 🙂 What about you? 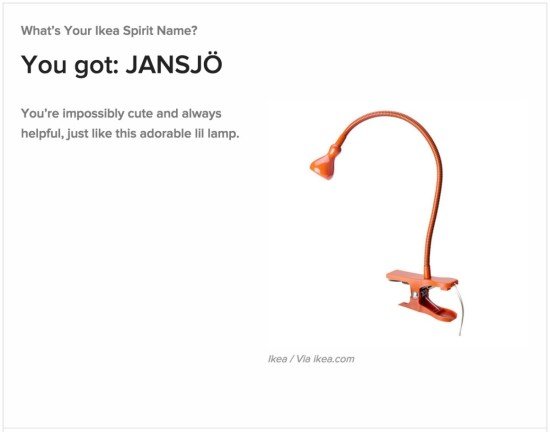 Of course, it makes no sense, especially if you speak Swedish. It’s like saying you’re truly Okeechobee and inside you lies a Maine. Oh well, don’t over analyse it, people, it’s just for fun.

And as a refresher … the IKEA naming convention (Thanks, Buzzfeed!)

Won’t they ever run out of names?

Now go check if you’re a GODMORGON? Link to quiz.