We’ve been working on a new house interior since 2012 and the style is Shaker/Modern Farmhouse, so nothing is complicated and IKEA has some styles that fit in perfectly with this look. We’re being pretty picky about this house because it’s our “dream home”. One of our rules is: NO PARTICLE BOARD on anything we purchase. Other than the back, Hemnes bookshelves are all solid pine.

We wanted an entire wall of bookshelves for our office in our new house and wanted them to look like “built-ins”. As it turned out, four Hemnes units (two open shelves, two cabinets with glass doors) were exactly the length of the wall minus about 4 inches. We figured we could make up the rest with filler and trim. We had already purchased another Hemnes unit (the one with the drawers) in the past and I knew I didn’t want the back to be the cheapie cardboard they supply, but I also knew I didn’t want it to be the wall either. So, we purchased some 1/8 inch luann plywood to make the backs. We sheared off the back half of the groove which the cardboard normally fits into and simply glued and nailed the plywood into place once the cases were put together.

We also wanted these to sit right up against the wall and cut off the back edge. We also cut off the sides of the top portion so they would all butt up against each other.

As well, once we got the units to the house, we did a lot of measuring and figured out that in order for our trim (which was already installed all over the house) to fit exactly on the shelving and look “right” we’d have to cut down the units by 1 inch to drop them down until the bottom edge of the horizontal piece was just inside the floor trim. That wall also had 2 outlets, so we brought those forward through the plywood and put the switchplates over the surface later. And to get the top trim piece to run across the entire length, we sheared off the front of the top as well.

Yes, that’s lots of hacking, but it worked out beautifully!

Having already installed an entire kitchen on our own, we figured we were old pros at installing cabinetry, so we used that same set of skills to install the bookshelves. We simply forced them all into level (IKEA items aren’t always level, folks!) and bolted them into each other in the exact middle of the horizontal space. On the ends, we put 2″ (or close) lumber to make up the difference and left the ends showing to nail trim into. A piece of trim across the top finished off that portion and then we put a small strip of trim over each “seam” where the shelf units met.

It took some filling and sanding to get some edges to merge together. Two good coats of primer on the plywood and then two coats of interior satin latex white over the entire unit and we were done! The Hemnes white finish isn’t that great (some knot holes show through a bit) but it’s almost the same finish as primer and takes paint very well. The paint also serves another function: It fills a lot of the tiny seams which are all over the unit between wood pieces, so when you are done painting, it has that “1920s” well-painted look that we were after.

We’re really happy with the look and eventually will either buy new knobs or spraypaint the current ones for the two cabinets as we’re not crazy about the black and the rest of the room has all nickel hardware. All in all, not a really difficult hack, zero particle board used… and it looks great in our humble opinion.

PICS: First one shows the units with luann installed but not painted. 2nd picture is entire unit finished and painted. 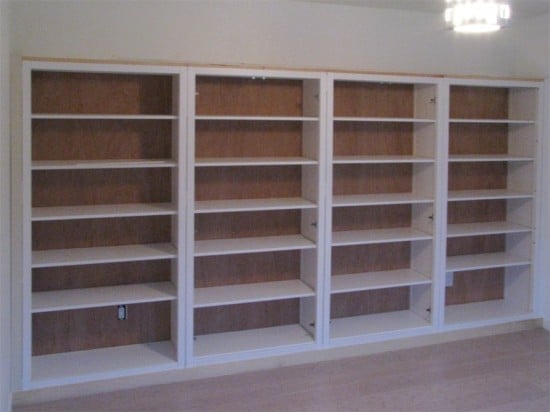 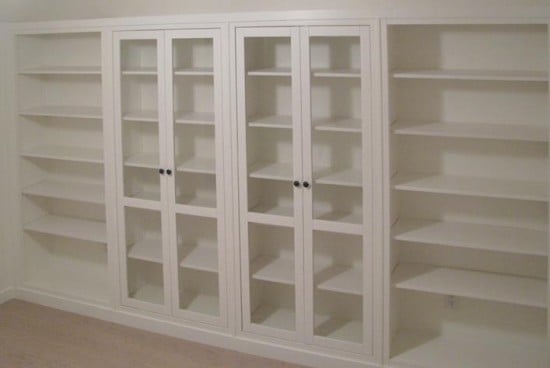