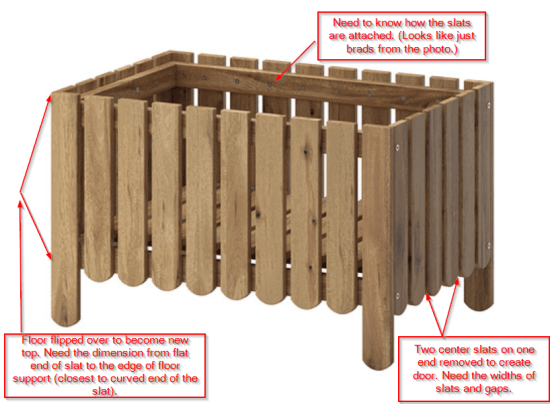 I haven’t seen any ASKHOLMEN planter hacks yet so I’m wondering if I can use it as an alternative for one of the hacks I’ve seen here previously.

Here’s what I need: I have a couple of cats who are special needs that require special high calorie food, but I have other cats who tend to be greedy feeders that I need to put on a low cal kibble. I need to keep access to the special food separate from the diet food. I’ve seen a couple of hacks here for cat feeding stations that are similar to what I’m planning on doing, such as an unknown IKEA kitchen cart with hardware cloth (mesh wire) and two IKEA picture frames as a door, and an unknown IKEA wooden stool with a magnetic cat door. While both are functional, I’d like something a little less utilitarian, with cleaner lines, that lets in a little light and is about the size of the previously mentioned stool hack. Looking at the IKEA website, I found the ASKHOLMEN elevated planter box.

Here’s what I have in mind: I want to turn over the ASKHOLMEN so that the flat ends of the slats are now on the floor. I plan to remove 2 slats on one end to serve as the entrance for the thin, special needs cats. I want to put the original bottom of the planter box reversed so that it then becomes a removable “top”, modified to be a flat surface. The new top surface will be for feeding the fat cats (they could use the exercise jumping up) and the bottom portion will be for feeding the special needs cats.

Here are the dimensions I need to determine if this is going to work as planned: I need to know the width of the individual slats and the spacing in between them to estimate what the opening would be with two end slats removed. To figure out what would be the new internal height with the floor removed and reversed, I need the internal dimension from the flat end of the slats to the opposite side of the support that holds the floor in place (not the surface that the floor is supposed to sit on but the opposite surface closest to the curved ends of the slats) in order to determine if flipping the floor over to be a new lid allows enough room for the cats to stand up. (Alternately, if I knew how long the legs are from the floor support, I can subtract that from the overall height to get an idea how much room is available inside.)

If the internal dimensions mean that the height is too shallow, my alternative is to keep the ASKHOLMEN in its original orientation, place the floor on the top rails and add a thin board around the bottom along the insides of the rounded slats to fully enclose the bottom edge (to keep paws from fishing underneath). In that case, I need the dimension from the end of the legs to the top edge of the rail where the original floor sits. This would be the height that the cats have to step over to get into the box.

If anyone can provide me with these dimensions, I would appreciate it!

Thanks so much,
~Ostracon