The project began in October 2015 with version 1.0; while the original design had many flaws the idea of a Gaming computer in a drawer unit survived until the summer of 2016 when version 2.0 was constructed.

The work on version 2.0 began around the 18 December 2015 with writing down everything that was wrong with 1.0, most of the problems came from using PCI-E extensions for the GPUs to create a double story design which made it so that something as simple as switching a cable took at least two hours. After it was clear what had gone wrong with 1.0 some time was spent with looking at other similar ideas and some professional Modder’s work to try and improve the original design. When February came around the drawing began, first on paper and then in Sketchup. 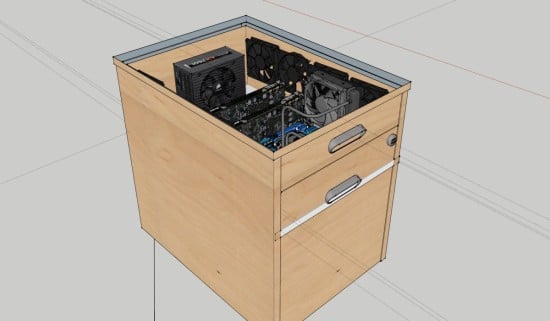 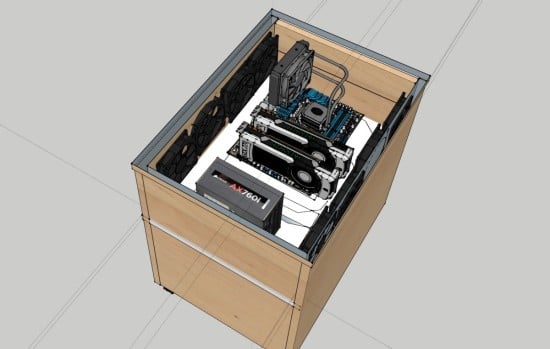 The design prioritized airflow for the GPUs (while the images show two GPUs I actually have 4), low sound levels and “hot swap” to make it easy to switch cables/components. The motherboard was mounted with the IO away from the back of the drawer unit since this meant that the GPU and CPU blow out all of their hot air against the openings on the side where the fans move it out of the room. While the CAD drawing shows 4 fans on each side (total of 8) I later decided to only mount (3 total 6). The SSD was mounted differently IRL since I needed holes to route cables. The fan filters do not appear on the CAD model but they are crucial.

When the basic design was finished I started making a list in Excel of everything that I needed to buy to make the project a reality. Early calculations showed that it would cost around 900 USD (8000sek) to buy everything needed including some power tools. On the 18 mar 2016 the first order was made for the project and two weeks later items started showing up in the mail. This went on until the 27 of July when the construction began. 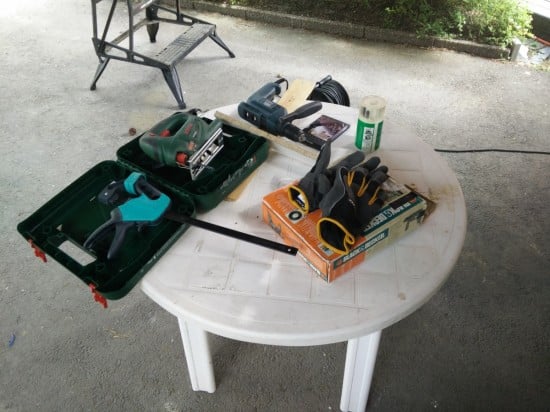 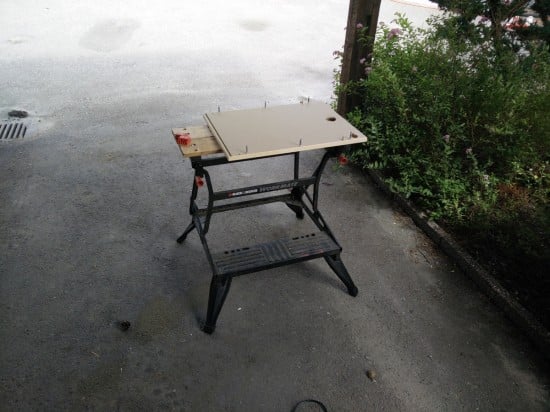 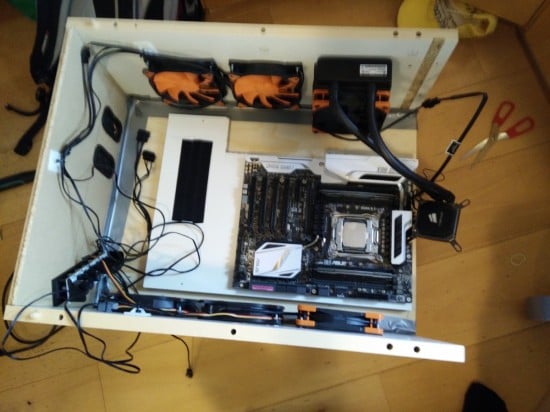 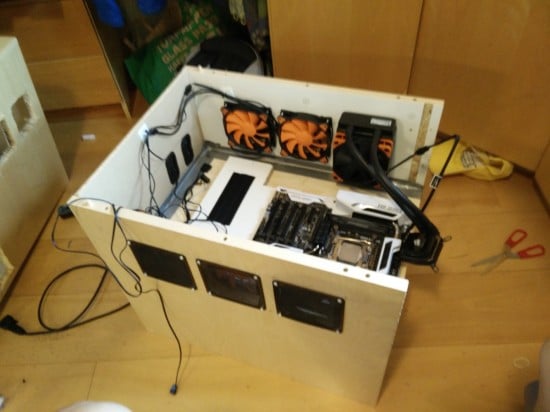 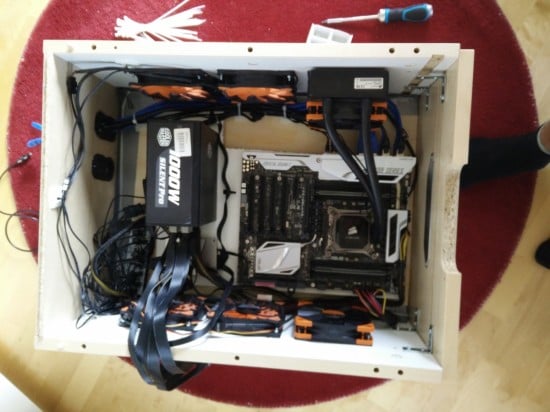 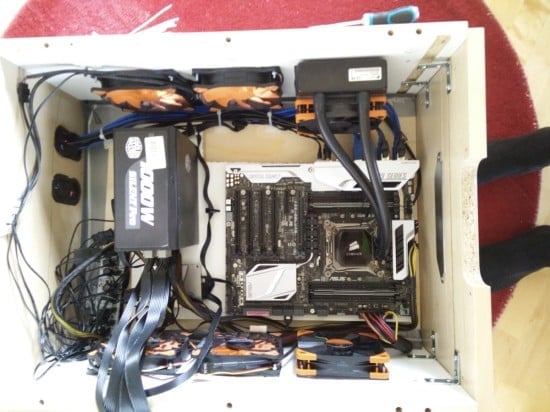 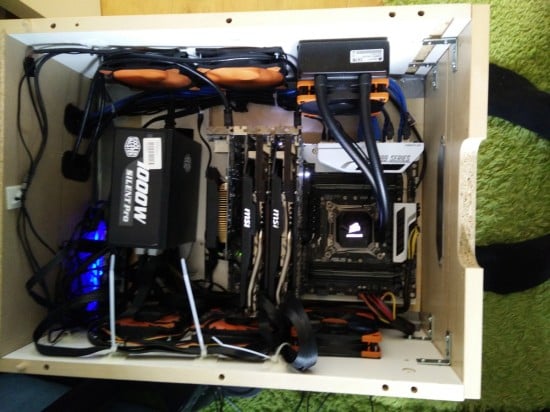 The construction took 3 days where I worked 10h a day. I built the drawer unit, made all of the heavy wood work like cutting holes for the fans and then did the smaller stuff like mounting the motherboard and PSU (DON’T MOUNT THE MOTHERBOARD DIRECTLY AGAINST THE WOOD, lift it up from the wood using standoffs). Some plywood + duct tape was used so that the warm air from inside the computer wouldn’t move to other compartments inside of the drawer unit since I use the other parts for storage. Once that was done I installed the motherboard and fans with standoffs and anti-vibration pads, routed the cables for the IO and fans, installed the PSU and routed the cables using the fans as mounting points and finally clicked in the GPUs. Since the SSD was really small I mounted it last; while the mounting was very easy it took a while to get the SATA cable in the motherboard since there wasn’t a lot of room to work with. Once everything was mounted I connected a monitor, mouse and keyboard and booted it up for the first time. The computer started fine but some of the fans did not get power and one of the GPUs was not plugged in right. I later ordered some more stuff on eBay that I had missed, mounted them a week later and it’s been running ever since. 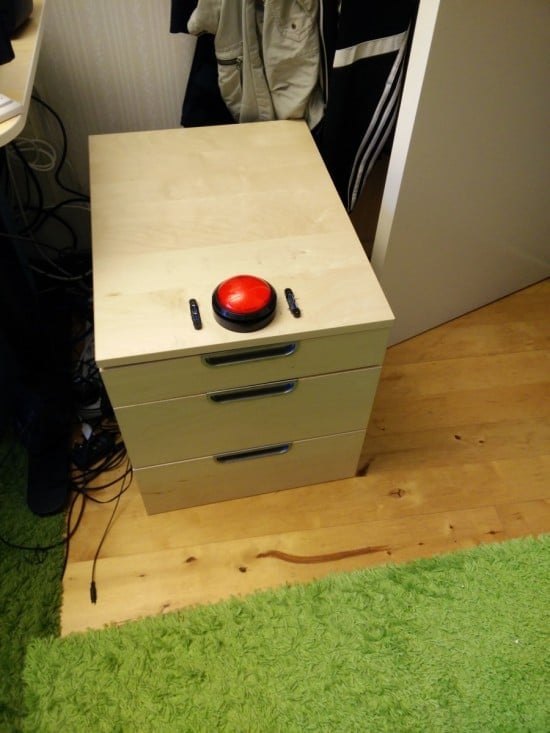 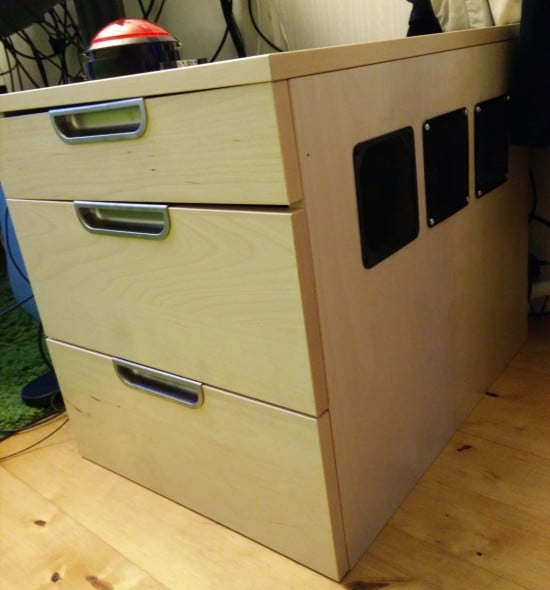 While the project wasn’t a failure I do have some comments:
1. 6 fans is probably way overkill, use 4 or even 2. Just make sure to have fairly balanced airflow so that slightly more air is going in than out.
2. Don’t route all of the cables for the IO, start with a few and then add more as needed.
3. If you have a pet, use a different power on button.
4. In computer terms this is a very small case; if you build one remember that you won’t have a lot of extra room so plan the cables carefully.