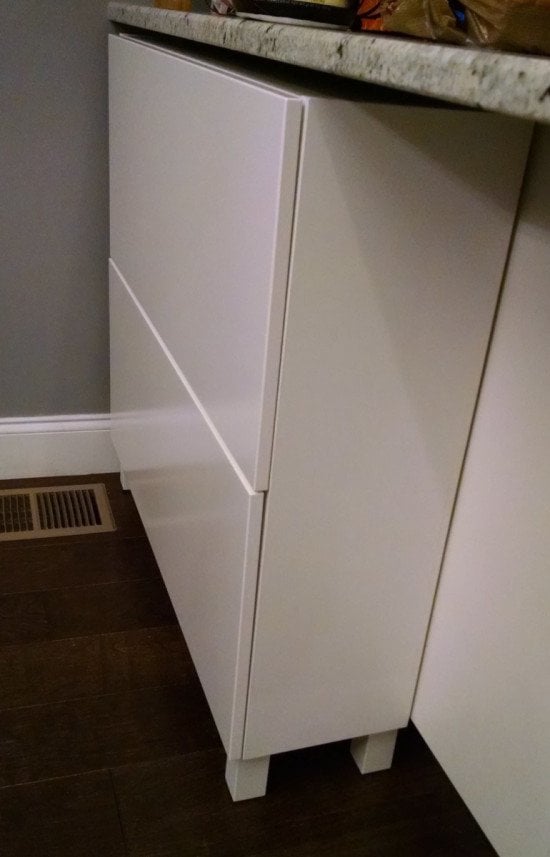 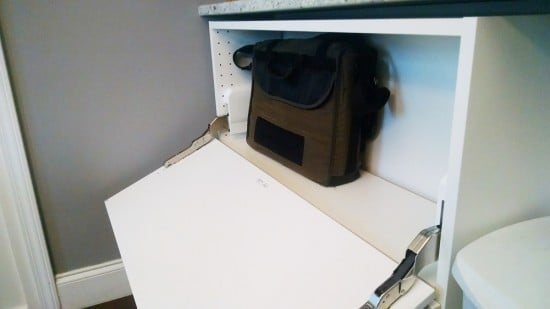 I needed a narrow storage cabinet to put all our bags into (laptop bags, diaper bag, briefcase, etc) that would keep them out of sight, and out of reach from our very mobile and curious 1-year-old. I had planned to tuck it up under our breakfast bar, which we never use, so that it would be in a convenient, but out-of-the way location, in a high-traffic area (previous to this, all the bags got dumped by the back door, on/around the dining room table).

So I decided to do a little redesign on a Sektion horizontal wall cabinet — primarily by turning the two-door option upside-down and sticking some legs on it. In my original design, I intended to cut down the KNUFF birch magazine files to serve as my bracket mechanism/side panel to keep everything in place. I did a bunch of algebra and geometry to figure out just the right shape to cut it in, and even got it all cut and ready to affix to the cabinet doors, but ultimately ended up not using it, because I didn’t realize how DIESEL the hinges are that come with the wall cabinet. If I were to do it all over again, I might opt for different hinges, since I definitely don’t need my doors to open to 153 degrees. While I do appreciate the soft-close function of the utrusta hinges, hinges like this would probably be better-suited for this project, accompanied by some magnetic latches to keep the doors from falling open.

Unfortunately for me, all of IKEA’s wall cabinets come in a standard 15″ depth. We were told by one salesperson that they might still have some in the old, 12″ depth laying around, but another salesperson looked at me like I was crazy when I asked about this. Anyway, I needed something 9″ deep, so I was going to have to do some cutting no matter what.

I took the cabinet and shelves to my local hardware store to be cut down. I was glad I didn’t go to a big box store, because the guys at the locally-owned shop really went above and beyond to ensure nice, clean cuts. They flat-out balked at my suggestion of using the panel saw typically used on plywood, because apparently that blade will rip just about anything to shreds. They ended up farming the work out to a local contractor who had a table saw in his truck bed.

BOY do I wish I’d had a table saw for this project!! IKEA’s Sektion line has these little router cuts in the back of each panel, so that you can slide the back panel in, rather than just tack it on the back with finishing nails. Classy. This proved to be the bane of my existence, since all I had was a radial hand saw and a Dremel tool with router attachment. The Dremel was far more accurate than the hand saw, but craaazy time-consuming. After spending literally hours trying to recreate cuts I’d seen accomplished in mere seconds on YouTube I was a bit overexcited when I discovered that my power saw did indeed allow for depth adjustment, contrary to what I had been told by my dear hubby. (In hindsight, he probably anticipated what happened next, which is why he told me it wasn’t possible). What happened next was a HOT MESS because I couldn’t see where exactly the blade was hitting my wood, I had no edge guide to steer me straight, AND I was using my basement stairs as my workbench. So, I patched up the disaster with some good old fashioned homemade wood putty, and later masked my failure with beautiful white artist’s tape. I called the hubs to inform him that I had deemed this step a waste of time, since you have to tap finishing nails into the back of the cabinet to secure the back panel anyway, and the inset design intended by IKEA was really only so that there was room for the rail system I wasn’t using anyway, since I had no intention of hanging my cabinet on the wall. If I were to do this all over again, I would skip the router lines all together, save myself a couple of days of work and aggravation, and just nail that panel onto the back from the beginning.

Since the depth of my cabinet was nearly cut in half, I had a lot of precision work to do, with regard to recreating the holes that facilitate assembly. This is where my Dremel tool SHINED. I also put masking tape around my drill bits to make sure I didn’t go to deep — a handy trick I learned from this guy. I actually wrote to him to find out what size drill bit he’d used to hack his Stubbarp legs onto a Valje cabinet. He advised either 1/4″ or 3/8″ — turns out, 5/16″ was the magic number. I didn’t use Stubbarp’s included hardware at all, because I planned on putting my legs flush with the corner of the cabinet, so Jason Wong’s use of washer would have been been pretty unsightly. Instead, I took the leg and its hardware back to my local hardware store (love those guys!) to find juuust the right size bolt, which had to be longer than the included screw, but shorter than the threaded rod that came with the leg. They measured the hardware for me and gave me the 4 bolts for free. #winning! I drilled 1/4″ holes in the bottom panel of the cabinet, but the bolts didn’t go through, so then I tried 5/16″ et voila! Perfect size to accommodate the bolt, while also providing enough resistance so that the threads could bite into the wood. You can see the bolt heads (not sure if that’s the proper term or not) in the bottom of the cabinet, but it doesn’t bother me in the slightest, since the piece is closed all the time. Nobody is going to notice it.

To recreate the little niches in the shelves where the support pegs hid, I laid the shelves on top of a side panel, so I could get precise marks that would line up with the peg holes, then I clamped the two shelves together at one end, stood them up vertically on the other end, and drilled straight down the center line between the two, — first for a pilot hole, then with a 1/2″ drill bit, to a depth of about 3/4″. 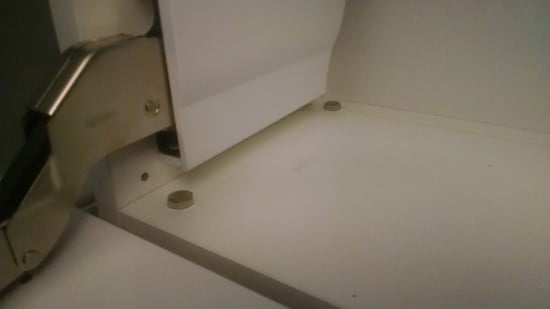 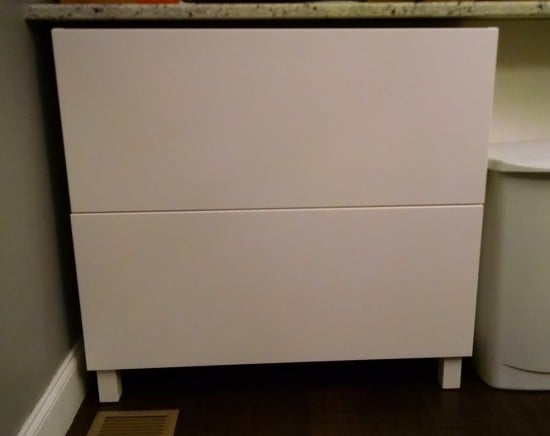 The hinge installation was probably the easiest part of the whole process, because all I had to do was follow the instructions — with one caveat — I put them on upside-down, so that the doors would open from the bottom instead of from the top. This way, it would be a lot easier to use as a floor cabinet, from a downward pointing vantage point. Like I said before, the included hinges that open to a wide 153 degrees was a bit much for me, but not a dealbreaker. If I had ended up using my birch magazine file turned shoe cabinet hardware, I might have needed something else to keep the doors from falling open, but I was pleasantly surprised to find that the monster Utrusta hinges keep the doors shut nice and tight, despite a flipped gravitational pull.

Finally, we opted not to put any hardware on the cabinet doors, because we didn’t want our daughter to try to pull on them. Since the Utrusta hinges are so powerful, you have to brace the cabinet a little bit when opening the doors, or else you risk tipping the whole thing over. Again — this would probably be solved by using smaller hinges.

All in all, I’m pretty happy with how it turned out — despite my many mishaps!

P.S. One last little tidbit about my modification — the Sektion instructions have you put the thread lock screws on the _outside_ of the the top and bottom panels, but I didn’t want to be able to see them from the outside, so I flipped the top panel over, and installed the thread locks from the inside of the cabinet.