Making space for 3: IKEA PAX as a room partition

We were faced with a problem, we had to move into a one bedroom flat. But there’s three of us – me, she who must be obeyed and our seven year old son.

The sole bedroom wasn’t that big but it did have an alcove with a fitted wardrobe and linen cupboard.

Ripping out the old 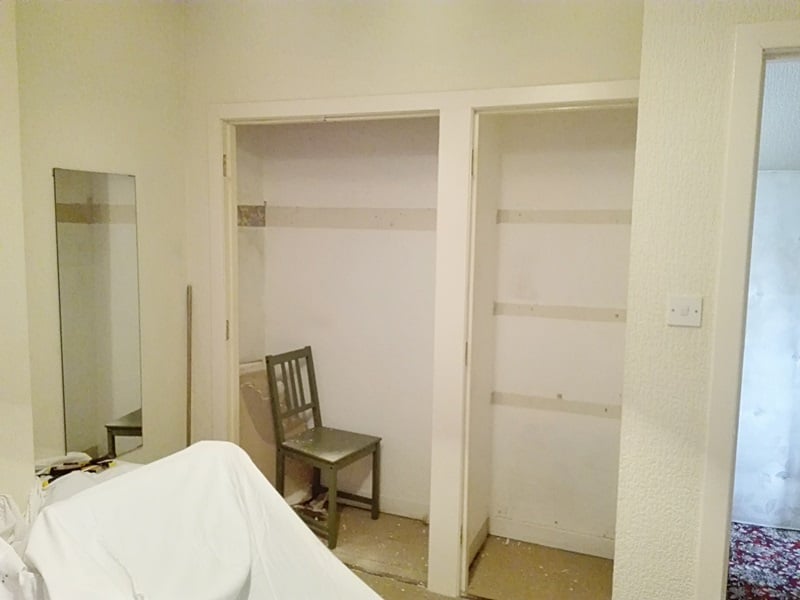 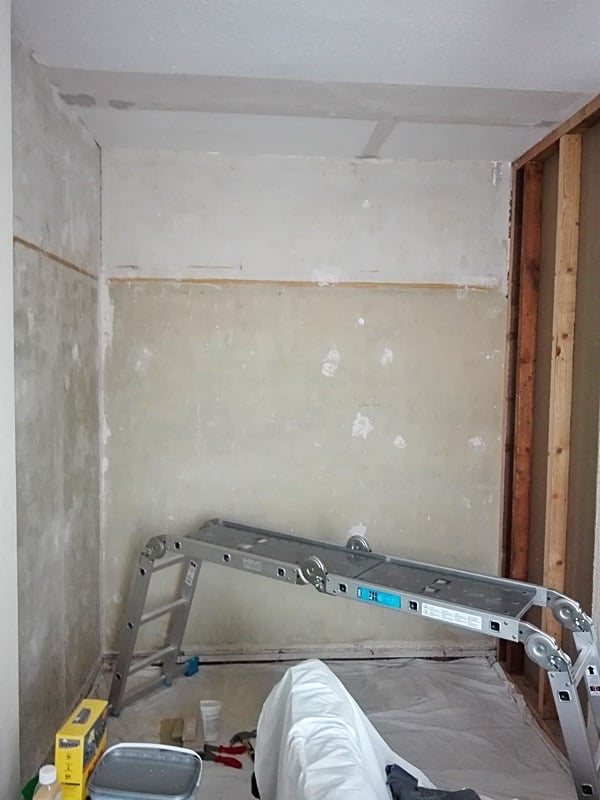 After several permutations on my ‘SketchUp‘ software I finally came up with the idea of ripping out the wardrobe and cupboard to make the alcove bigger.

Then, to use PAX wardrobes as a room partition. And fit a STUVA Loft Bed set into the space freed up by removing the original fitted cupboards. 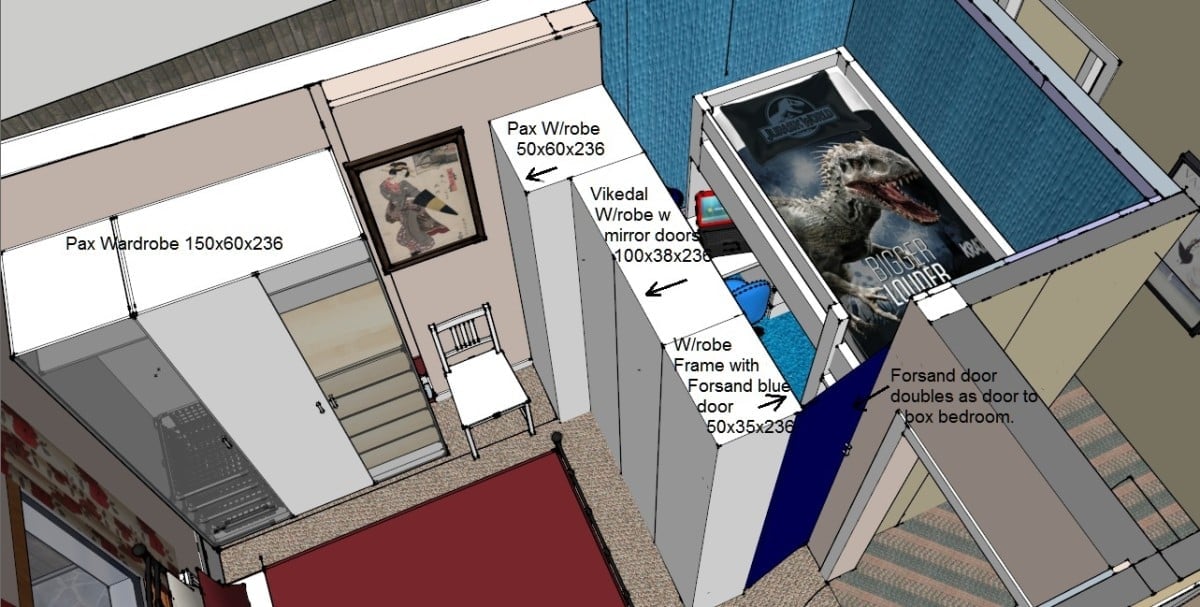 It was a very tight squeeze for the loft bed.  There was exactly 270cm width AFTER I had taken off the plasterboard on the right hand wall.

This side of the room partition – kid’s space 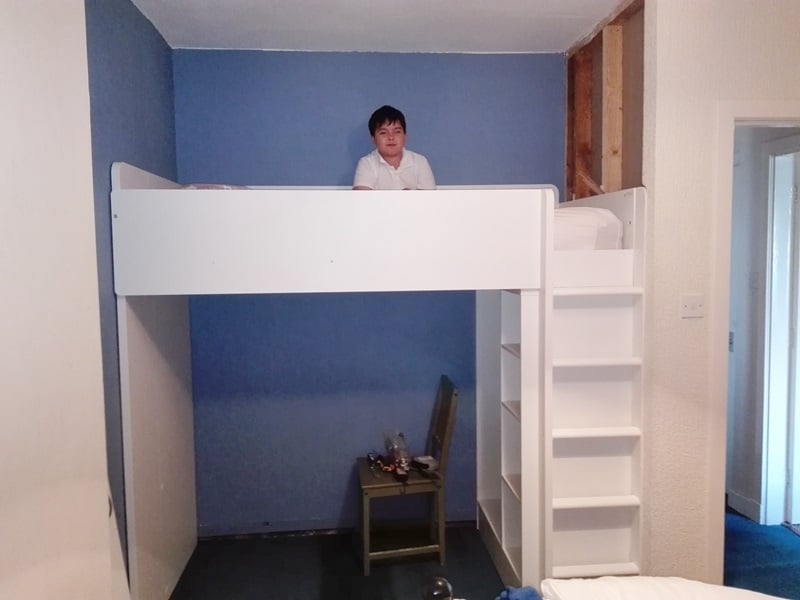 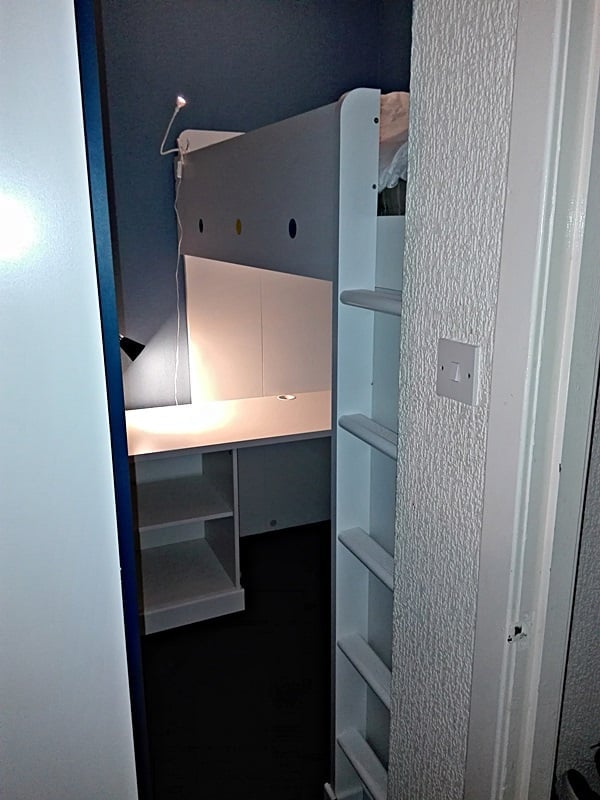 As it turned out, that still wasn’t enough. And, due to the wall not being built exactly square (are they ever?), I still had to cut out a 5cm rebate in the right hand timber stud in order to accommodate the ladder.

It also meant that we couldn’t build the loft bed exactly as stated. We had to miss out some fixings which were inaccessible.

However, the integrity and tightness of the structure was maintained by judicious use of a few steel brackets and mending plates (only one of which remains visible).

After much blood, sweat and tears, and with appropriate ‘easing’ into place, the finished bed is absolutely rock solid. I pity any future flat owner who wants to remove it!

On the other side of the room partition – parent’s room 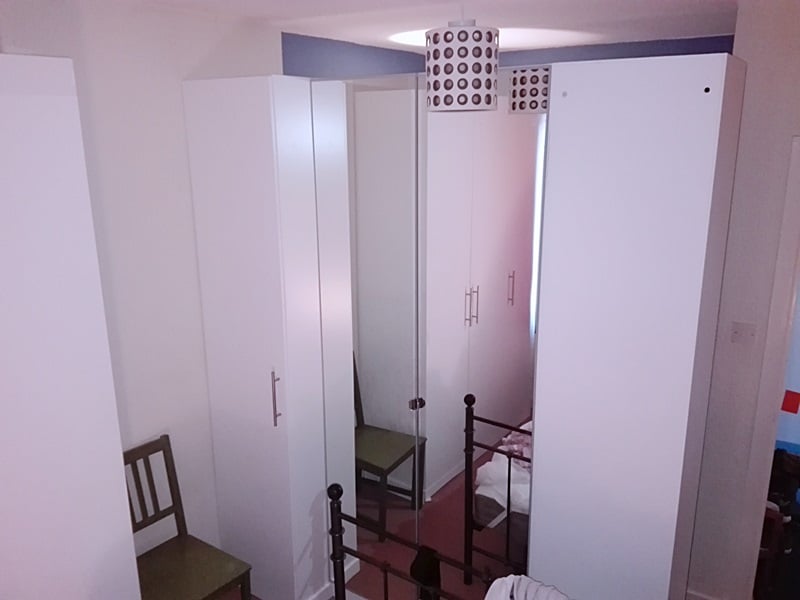 The space remaining for ma and pa is a bit tight. Nevertheless, there is still enough room to walk around three sides of the bed.

The two existing IKEA chests of drawers we had have simply been put inside the wardrobes to save floor space. Even after doing that, we still have plenty of storage and hanging space left.

As for the wee lad, well, he’s got plenty of storage space too. But how will he feel about climbing up into a loft bed when he’s a six foot something teenager?

Ah well, we’ll have to cross that bridge when we come to it. Has anybody got a set of sky hooks for sale?!

~ by Richard, Jen and Robbie 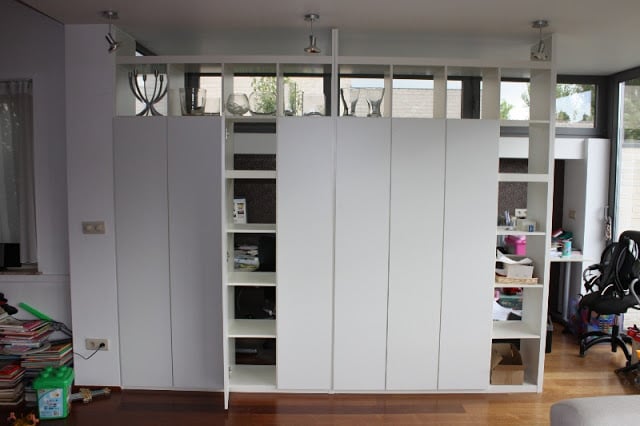 The EXPEDIT/ KALLAX is one of the best choices for a room divider. But the open shelves can be a mess if you’re not into tidying. Kris got around this problem with custom doors for the EXPEDIT. See more here. 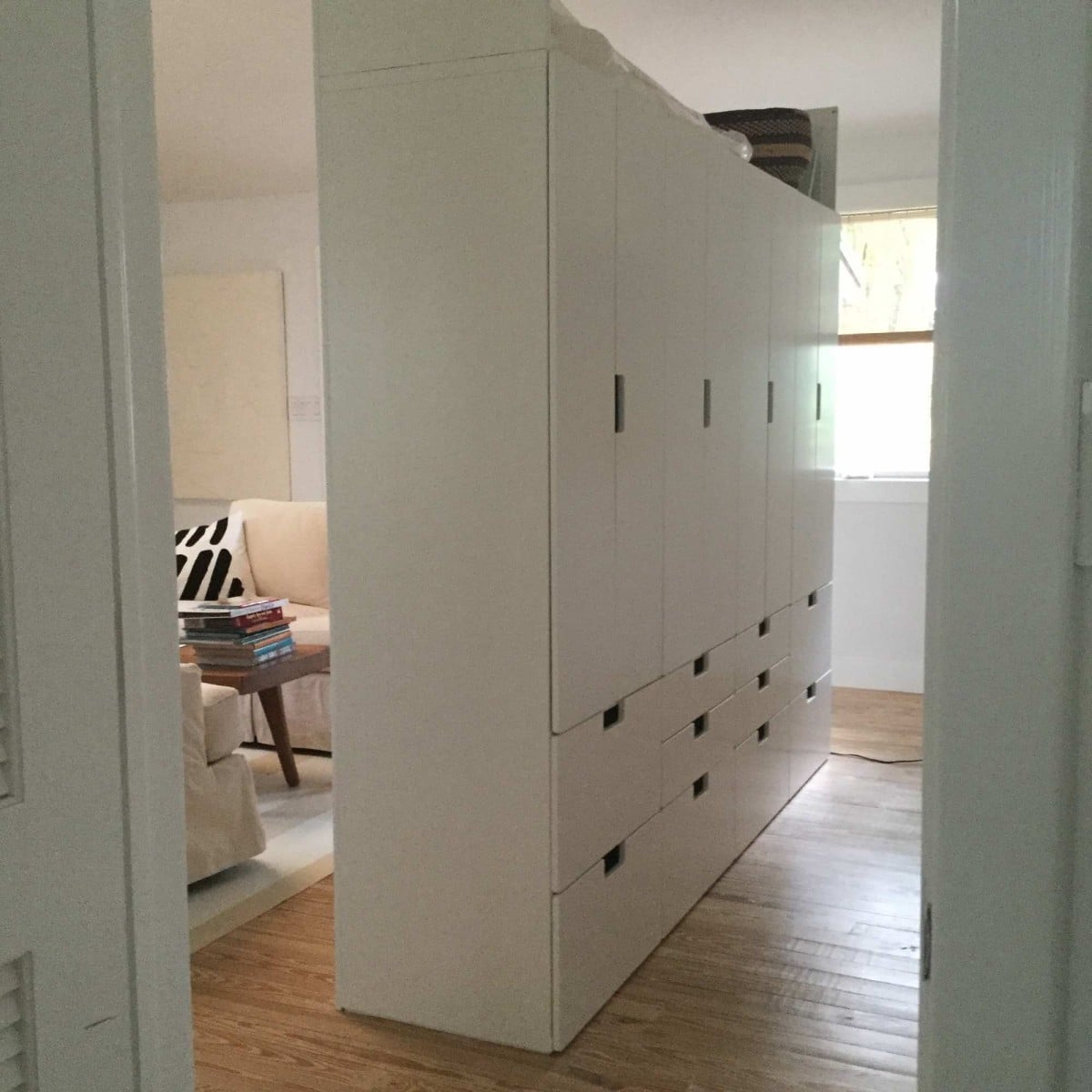 Not keen to make doors? Take the easy way out and use the STUVA instead. You’ll just need to cut a panel to cover the back. See the STUVA freestanding room divider. 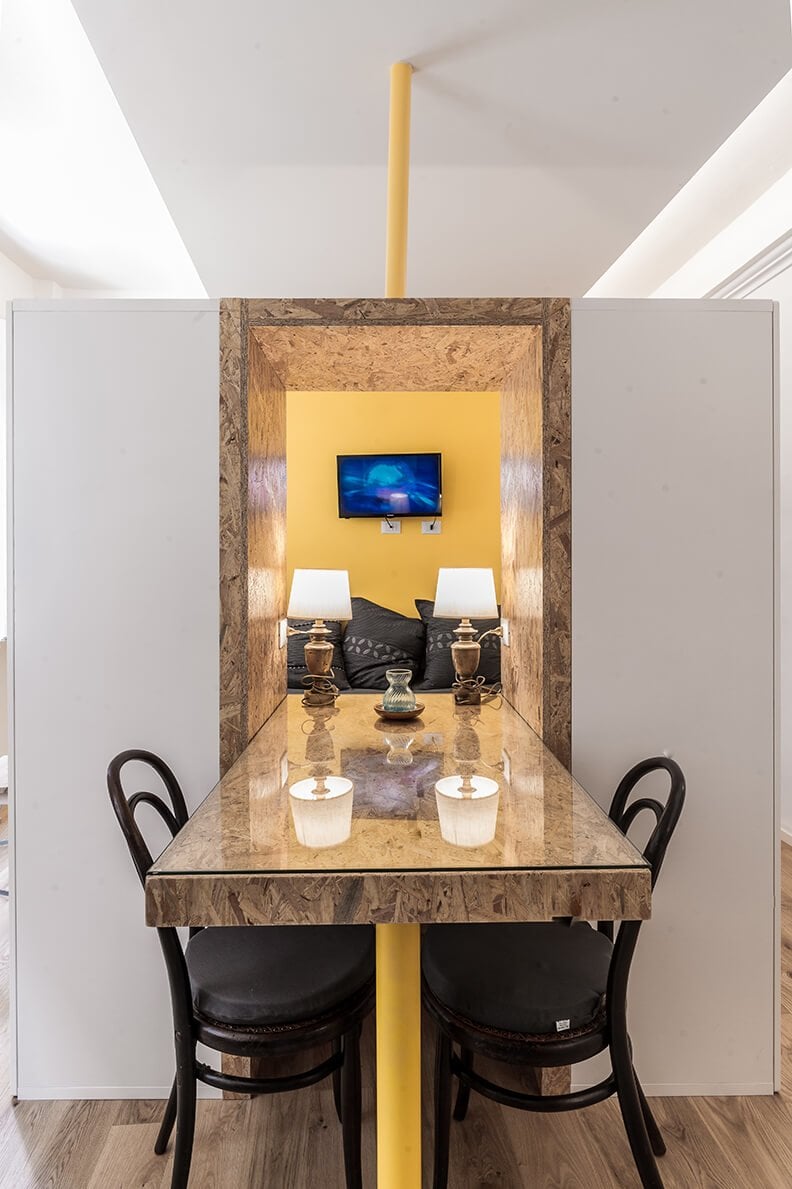 Another take on the STUVA as a room divider, with two STUVA cabinets flanking a dining nook. Details here. 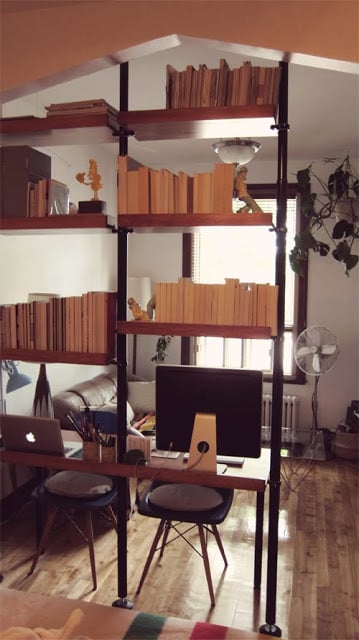 The STOLMEN is lovely as a mid-century styled space divider and shelving unit. Here it functions as partition shelves with desk.