I would like to share my hack of IKEA IVAR shelving system into a built-in bookcase. It all started with the wish to have a bookcase that could store all the books we still had in the moving boxes.

I could not find a bookcase that would fit the space we wanted to use. Or did not like the looks or did not want to pay that kind of money, so I decided to make one myself. This way the built-in bookcase could make the most use of the space, from floor to ceiling and from wall to wall (or wall to door in my case). To not start from scratch completely, I decided to use the IKEA IVAR shelving system, this way I had some sort of a base to start from.

I wanted a lot of shelving space for our books but also wanted some covered storage underneath. Since the space in the room is limited, I wanted to use sliding doors for this part. I searched for a system that I liked and in the end choose a Hettich bottom running system (also used in some IKEA furniture, by the way).

Unfortunately, in my old house, the floor was not level. So as a preparation, I placed a frame on the floor with the same depth as the IVAR side units (30cm) and levelled it. Also, the IVAR side units were not available in a length that would reach up to the ceiling, so I bought the longest ones available, and then extended them.

I thought it would be easy to extend them since I would not need any dowel holes for shelving in this top part, and used some wood I had lying around. But this turned out to be a bit harder than I thought. I would advise anyone who wants to extend the side units, to buy one (or more) extra pieces and cut and connect those. 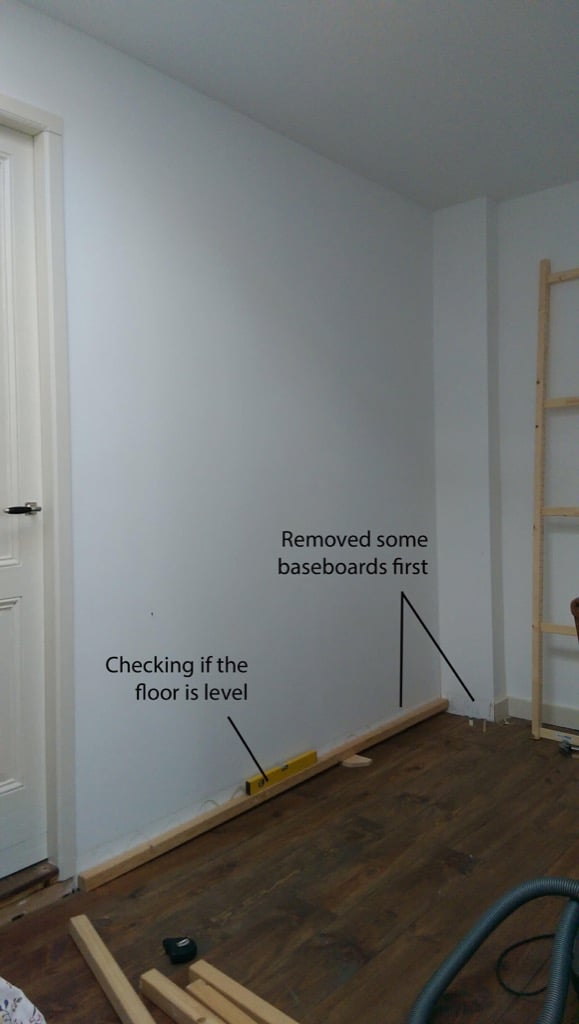 When all 4 units were extended, I placed the outer two and attached them to the bottom (levelling) frame and the wall. At this point, I measured the exact dimension in between these two to determine the length of the shelves.

I knew I had to also customize the shelf length to make it fit exactly onto the wall I wanted. (I could have used two standard length sections and make only one fit, but I liked it better if all sections were the same width for several reasons; it is easier for the sliding doors to have equal sections, I can now interchange shelves between all sections and I like the looks better.) At this point, I made 9 shelves to the right length so I could assemble the IVAR and have a stable basis with all side units in place. 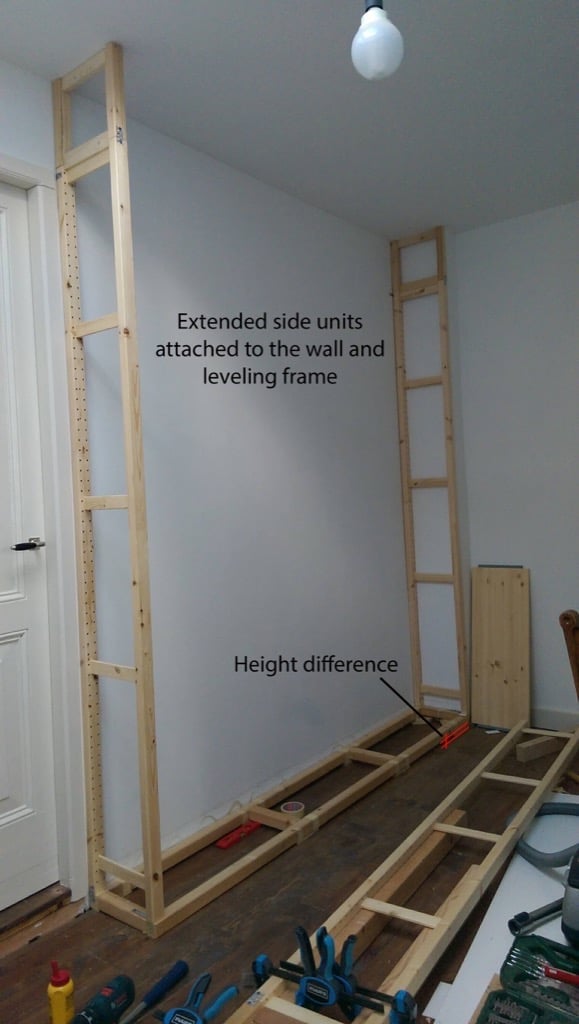 To shorten the shelves, you can carefully remove the plastic strip on one side of the shelf. Then, cut the shelf to your desired length, make a new slot in the side using a router, and put the strip back in again. I found this instruction on YouTube (credits to Sean O’Brien) : 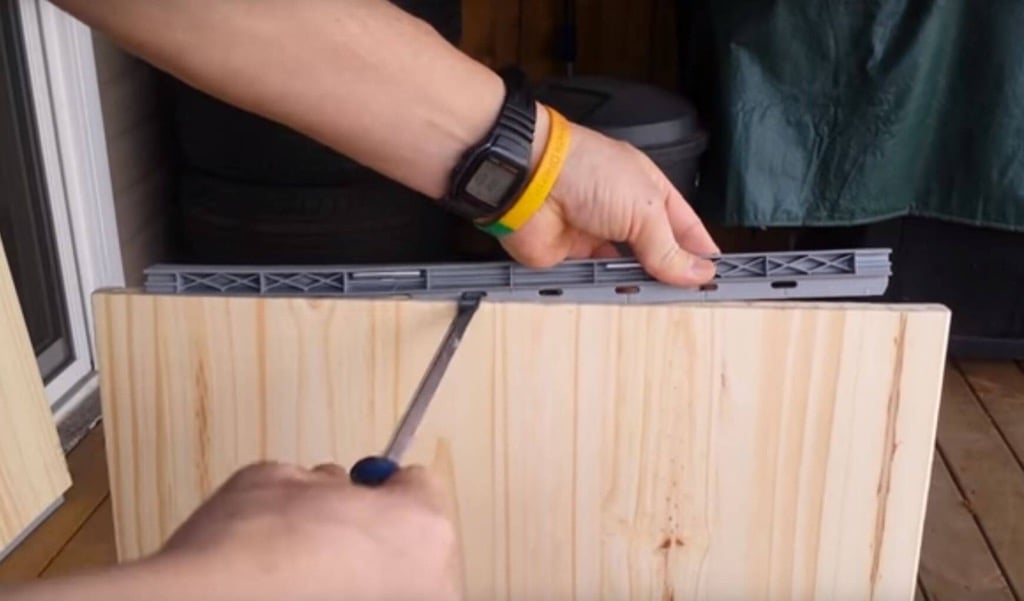 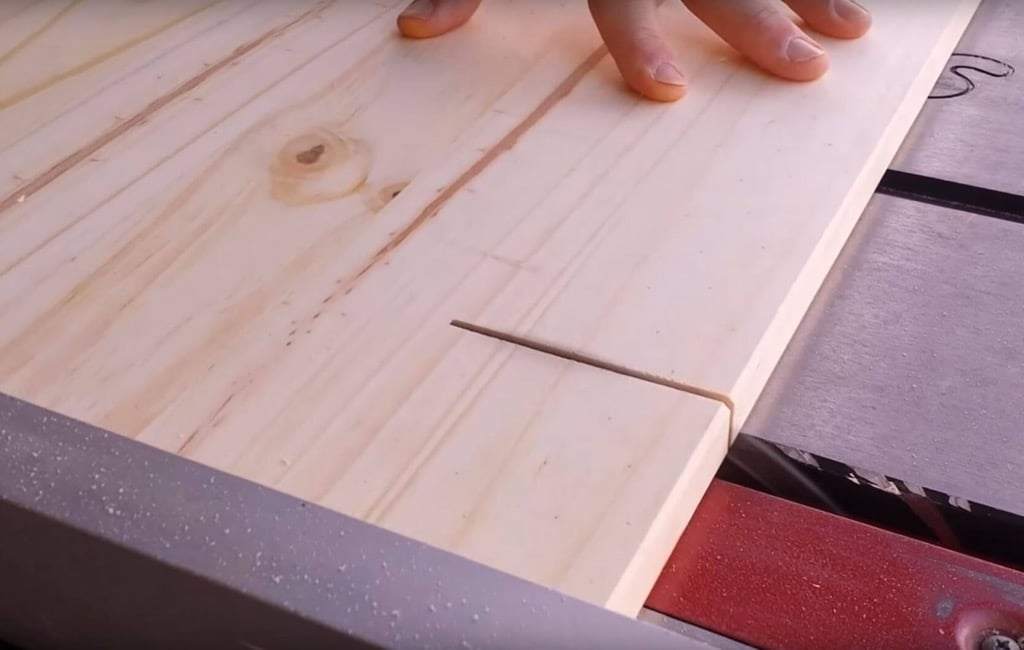 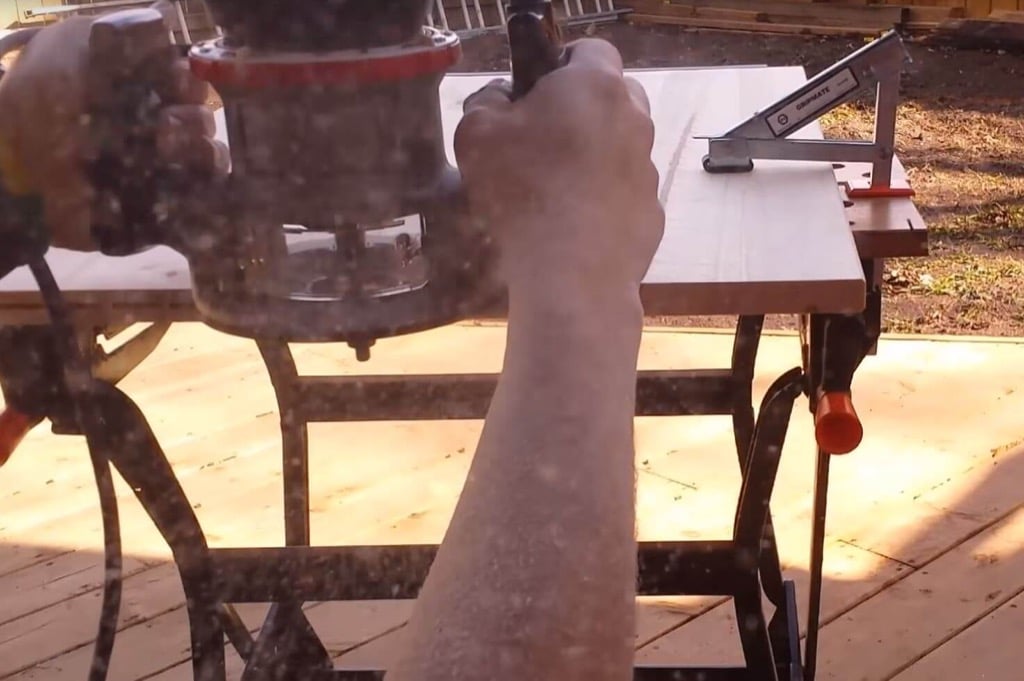 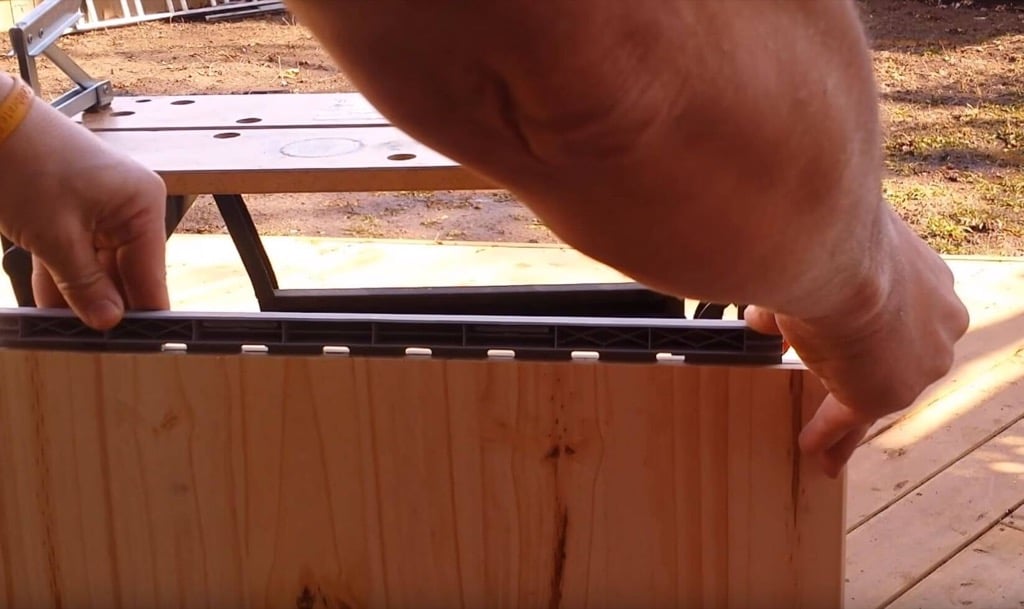 If you don’t own a router, there are surely other ways to do it. (I also found a hack on this site using L brackets and screws. Take a look at it here.) But I liked to keep the strips so I could keep using the dowel pins.

With the 9 shelves, I assembled the other two side units and attached them to the frame and wall as well. At some point, of course, I also shortened all other shelves to the same length. 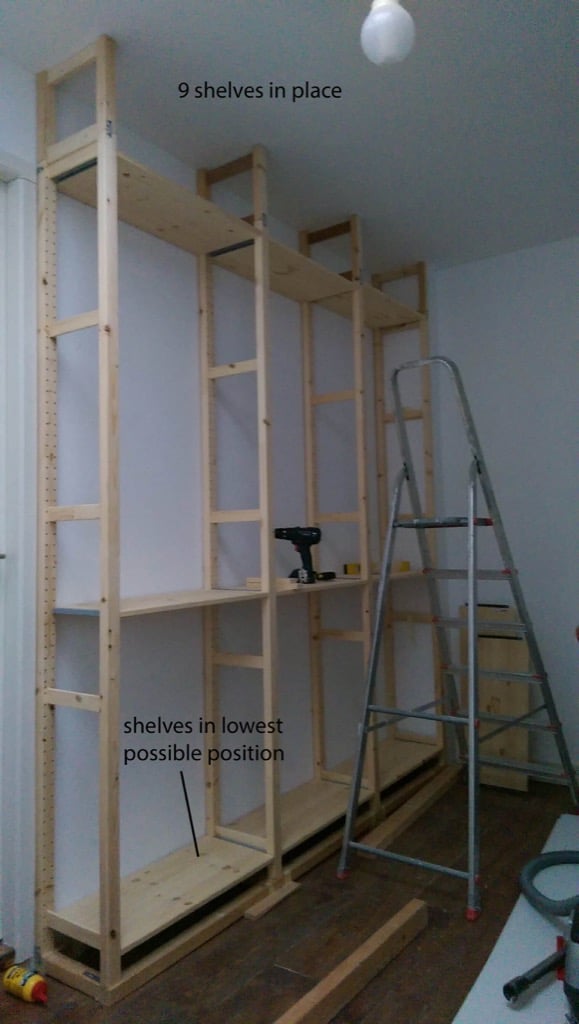 At this point, I tried if the 3mm thick plating I bought would indeed do the job, and it did 🙂 The 3mm fits right between the plastic strip of the shelf and the support bars of the side unit.

I used MDF plating (since this was the thinnest material I could find) and had it cut into 23.5 cm strips at the hardware store. This fitted exactly in the side units. For the middle two side units, I applied the MDF plating on both sides, so I had 6 strips in total. 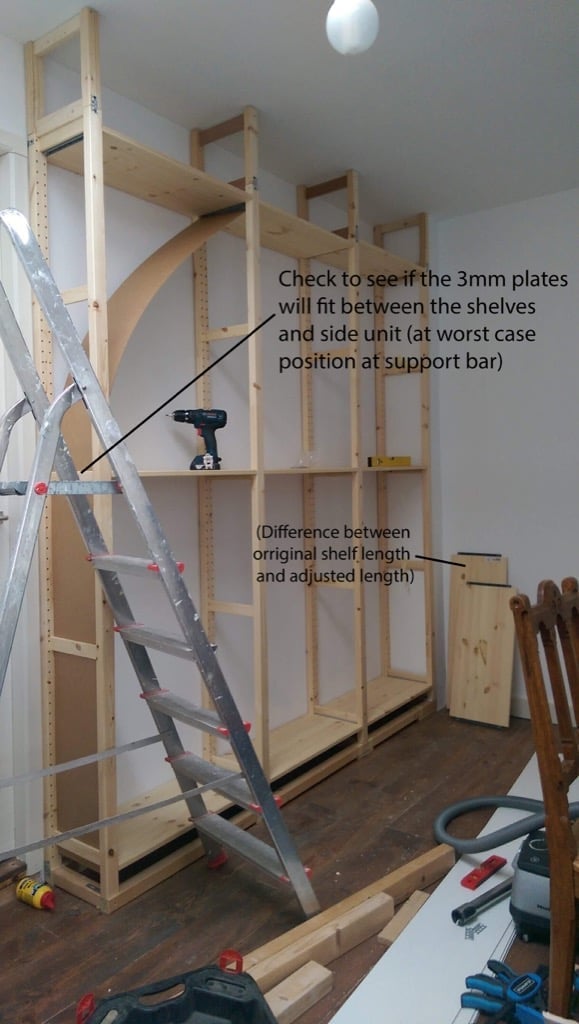 With this base in place, I made a frame for the sliding doors. This setup will depend on the sliding door system you choose. I used some 18x44mm wood and made slots in the bottom and top part with the router to fit the 4 guiding rails (2 on the top, 2 on the bottom). I placed the top of this frame at the height I wanted and aligned it with a shelf at the nearest dowel position, and attached it to the frame.

Then I made the sliding doors to size and attached the rollers and guides to it and tried the doors.

Also, I choose to not use the lowest dowel position for the lowest shelves but to put them straight on the levelling frame. For these bottom 3 shelves, I removed the plastic strip from both ends and cut out some parts so they neatly fit and cover the complete levelling frame. 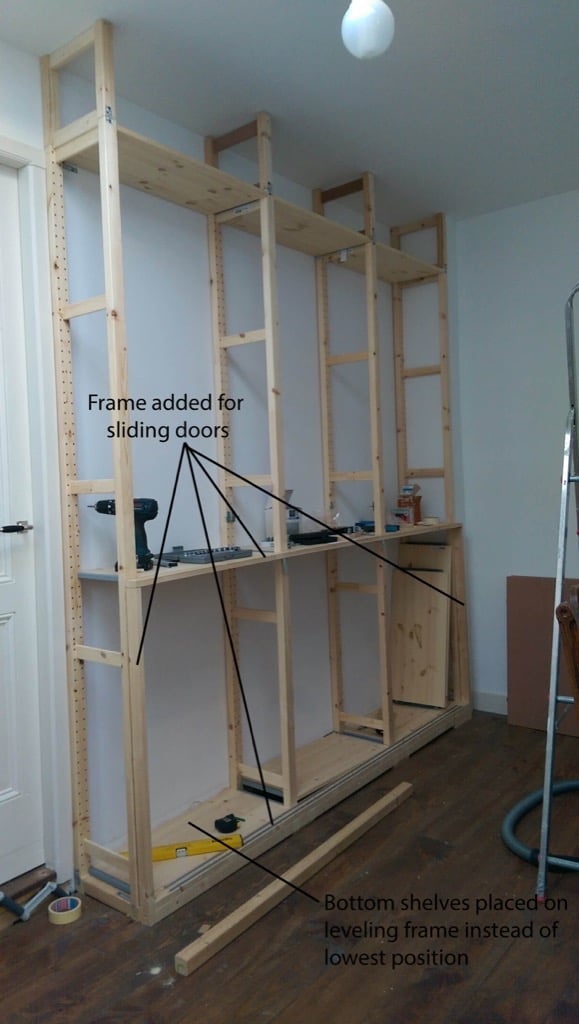 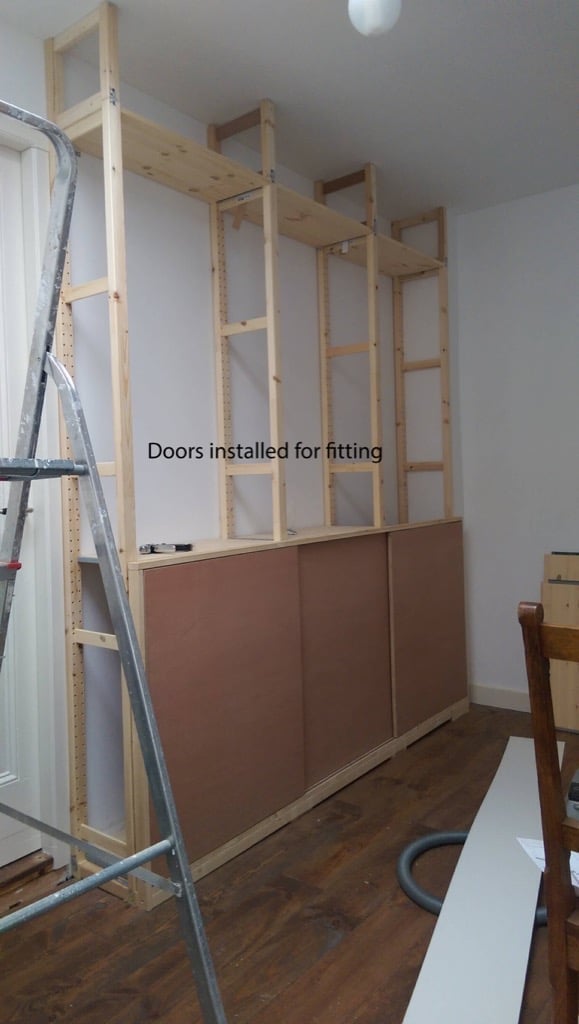 This next picture might seem like a big step, I forgot to make more in between pictures at this point, but this is what I did: 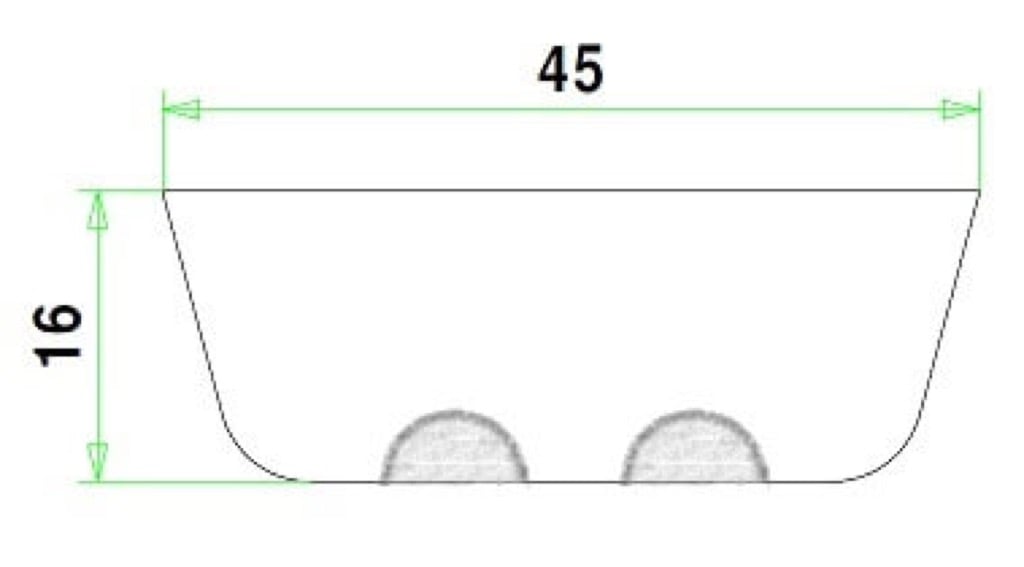 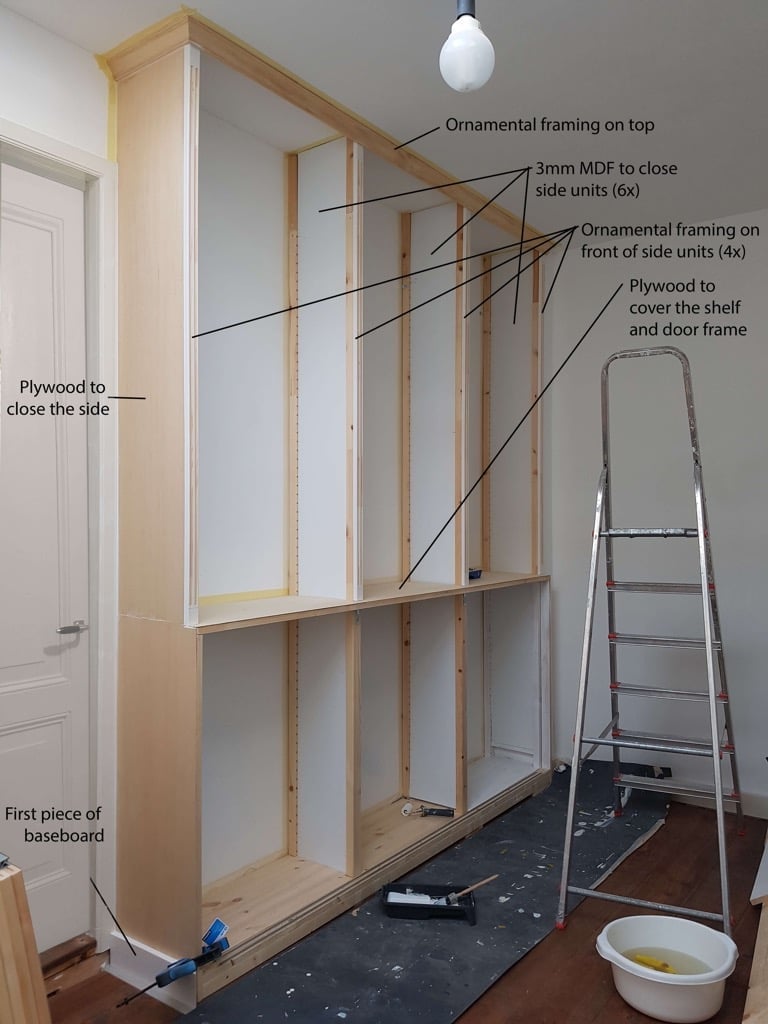 Now it was time for the first coat of primer (and the last piece of baseboard). 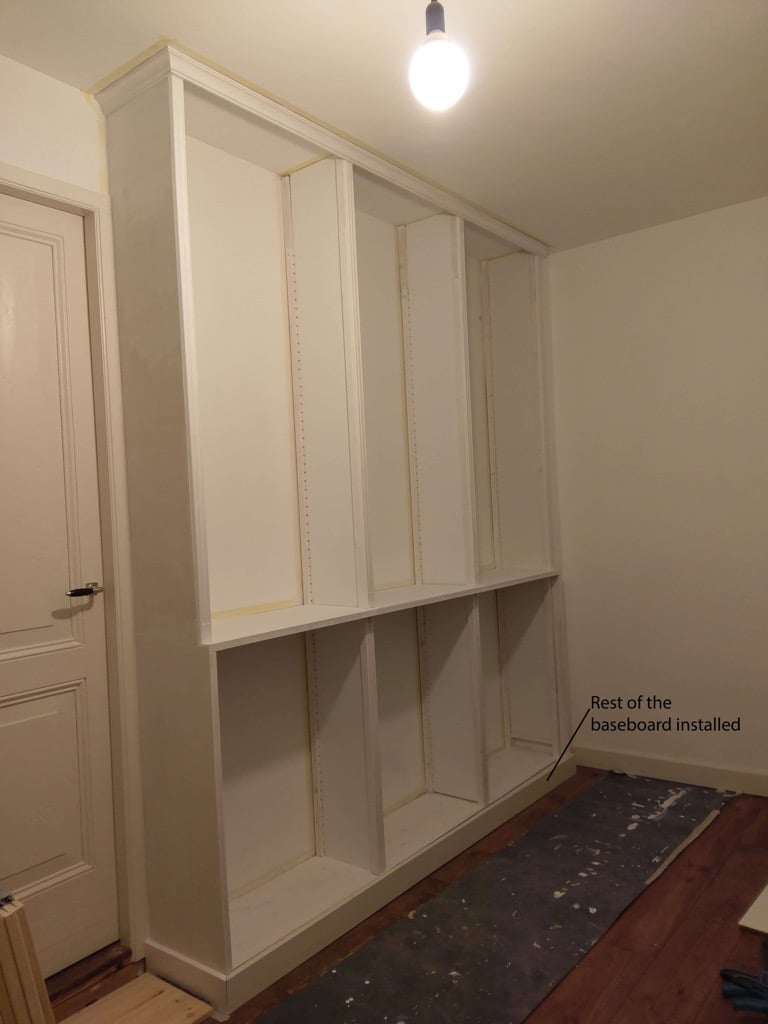 After some more painting, it was time to put in the first lucky books. 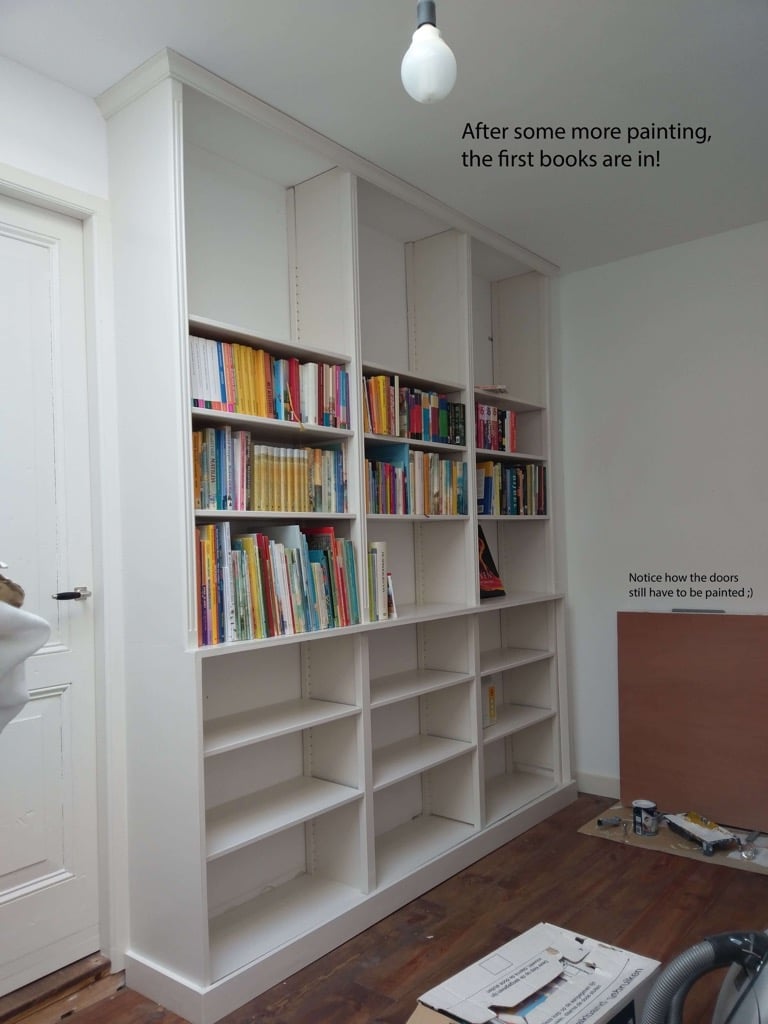 After finishing painting the doors, installing the handles, assembling all shelves (and placing more books), this is what the end result of my built-in bookcase looks like. 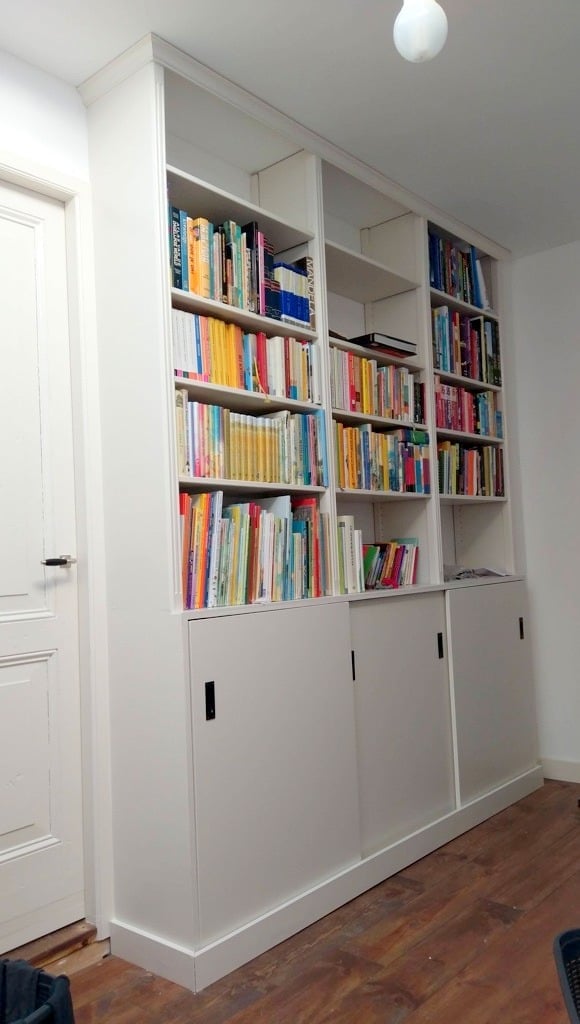 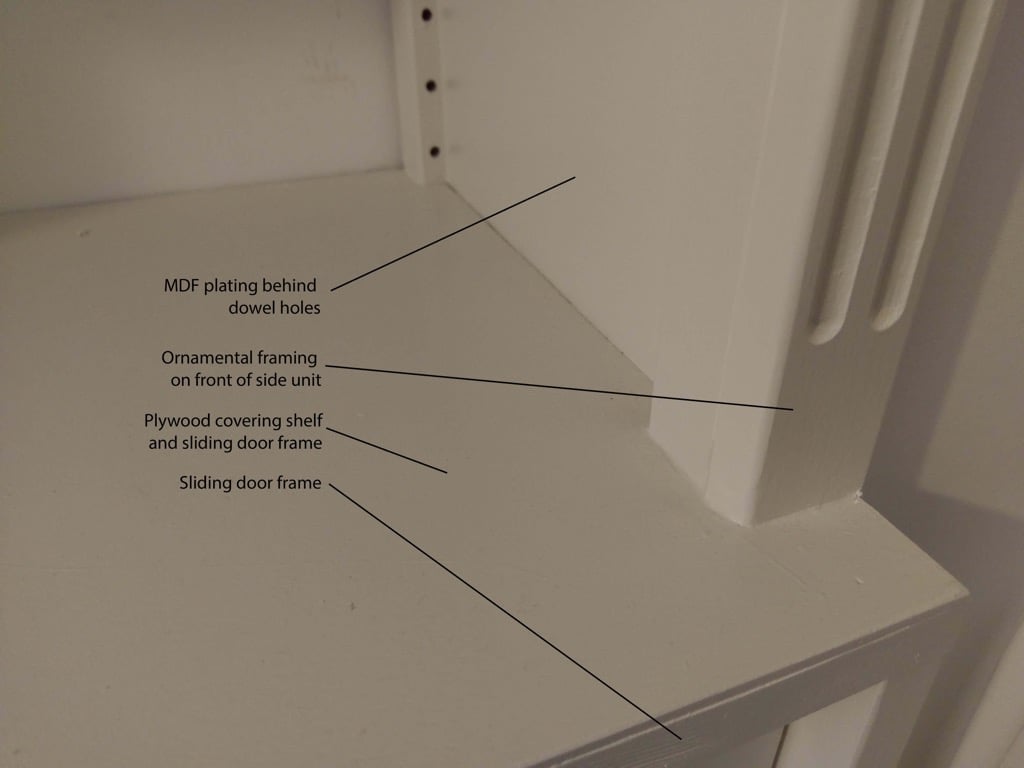 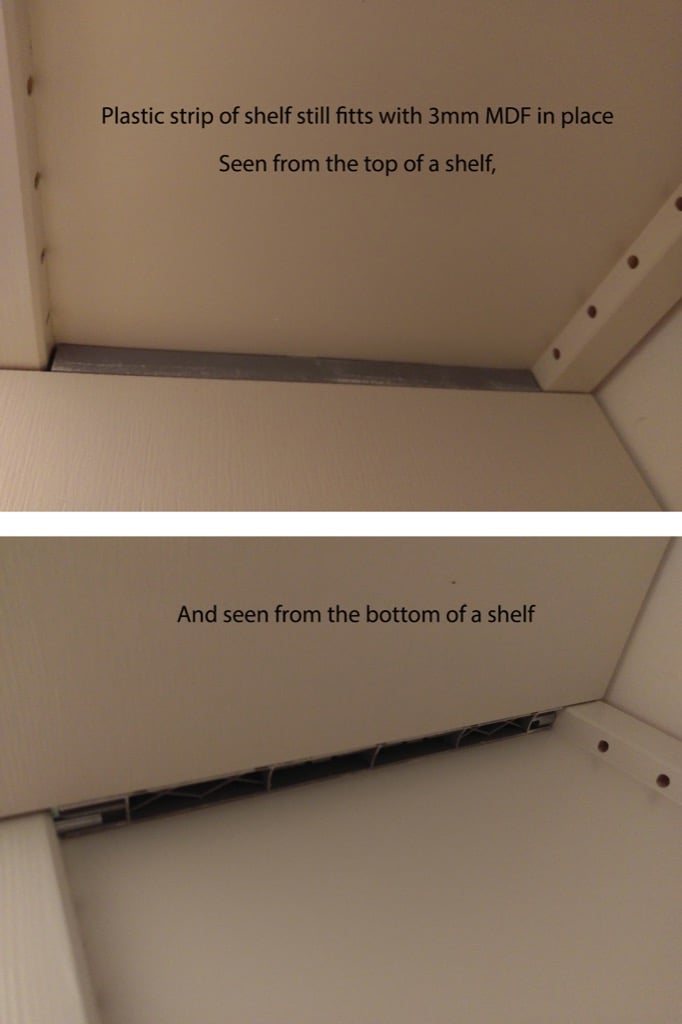 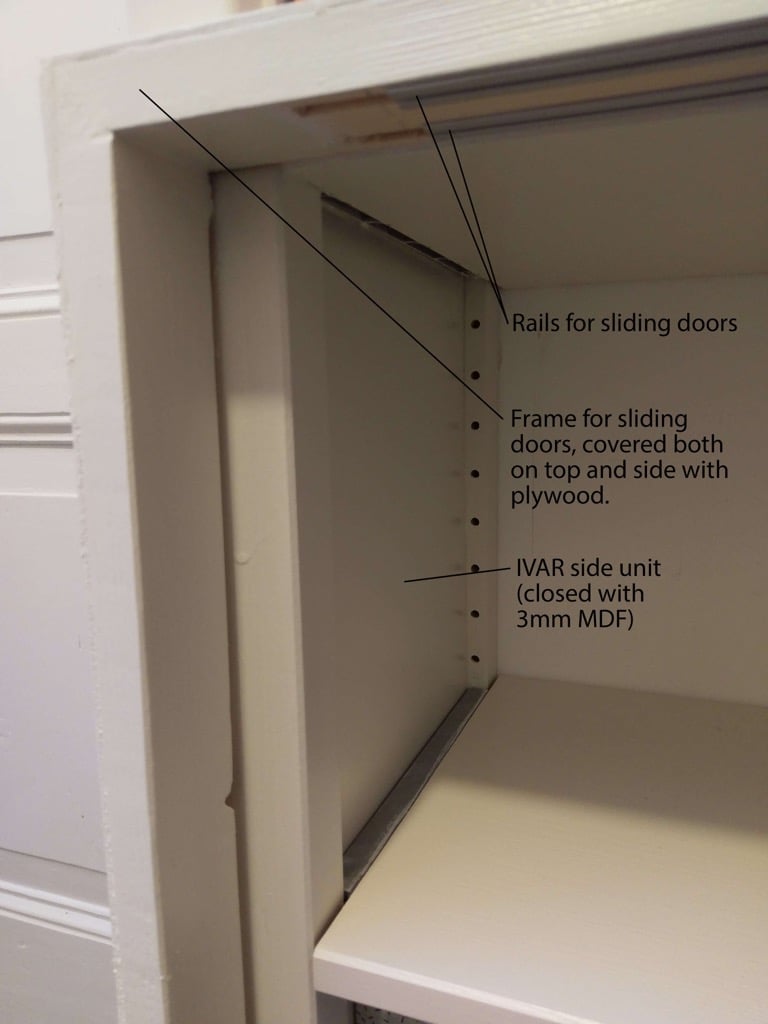 In preparation for this project, I looked for several other hacks and built-ins from IKEA furniture and this really helped me in planning my project. I hope someone out there will also find this information helpful.

~ by Pauline (Utrecht, The Netherlands)