The missing link in IKEA’s range. Why? We inherited a cat that shredded our furniture, apart from a 20-year-old IKEA POÄNG armchair, with no cat resistant seating products on the market, we decided to buy 2 additional POÄNG armchairs, we went for the new range that come with a blue/grey wash on the woodwork and a hideous faded yellow seat support (that shows when the chairs are sat upon).

Upon the success of the chairs (cat resistant) and re-visiting IKEA, we were dismayed to find that no matching sofas were available and that led me to this IKEA hacking site where I saw the previously modified, 2-seater (POÄNG2). Personally, I didn’t like the shock absorber addition or the fact that that the front cross members were set behind the chair legs, that led me to give it a go. 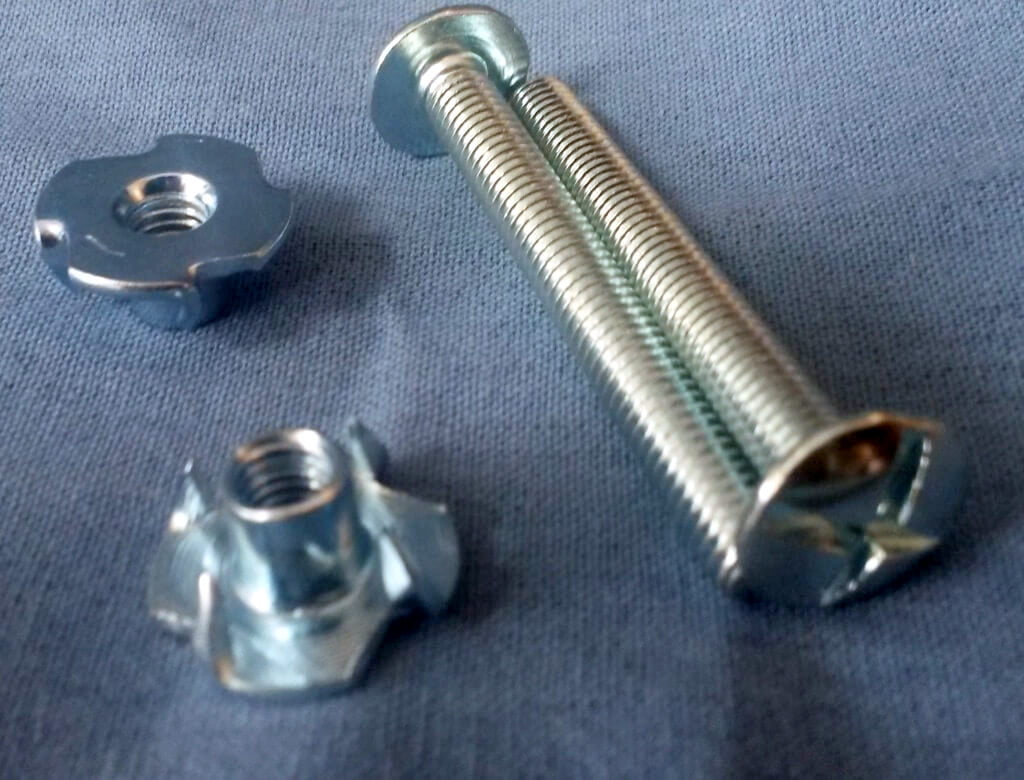 1. I assembled one POÄNG chair, then took a measurement of the arm width, halved the measurement (as the plan was to support the central seat section of the sofa by using parts of the arm/leg sections to act as supports).

I then marked the front and bottom cross-members for cutting off one end, once cut to length (with the dowelled sections removed), I re-drilled the cut ends to receive two lengths of 10mm steel threaded rod that were long enough to be inserted into one cross-member, through one of the central legs and into a second cross-member.

When cutting the cross-members, I was very careful to cut as straight and accurate a line as I could, as these joints would be visible. I used a hacksaw (cut slowly through the front facing edge first, then the top/bottom and back sides). The same modifications were made to the chair that was to go at the other end of the sofa.

2. Cutting the arm/leg sections that are to support the central seat (no shock absorber needed). First, I used a set square to mark off where to make the cut. 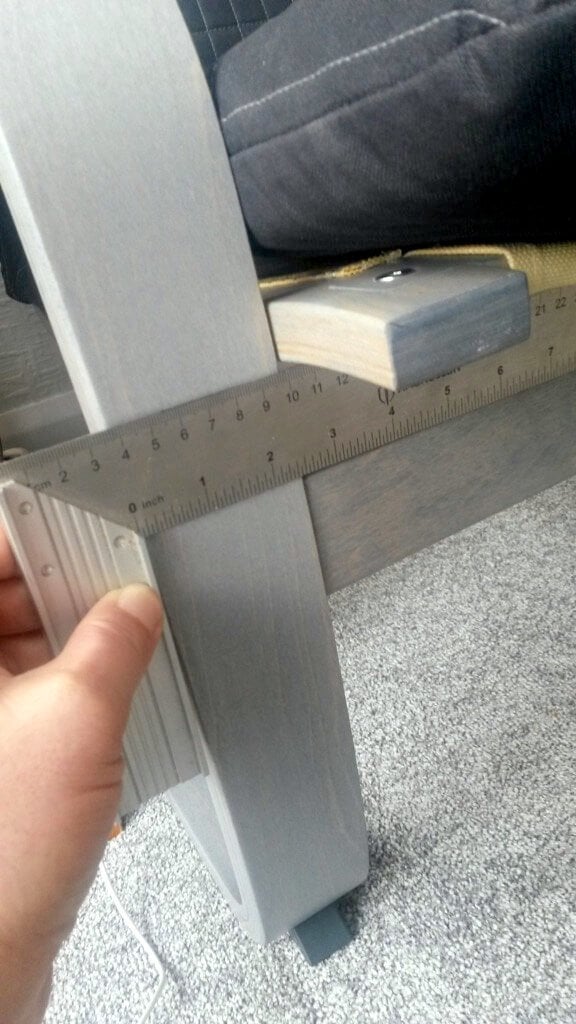 I wanted it as close to the seat base as possible to provide support at the front of the seats when sat upon. The off-cut sections will be used later as the rear seat supports. Where the dowels are designed to fit into the legs, I drilled through them completely so that my threaded rod sections (mentioned earlier) could slide through. Two of these arm/leg sections would need to be cut to provide support for both sides of the central seat.

3. I then switched from working on the frame of the POÄNG, to joining the three seats together, when laid out, the outsides of the outer seats are unchanged as I wanted the sofa to look like a normal POÄNG chair from the side.

When laid out I could see that the chairs would easily align with each other as the bolt holes and the solid rod at the front would fit together easily. What was necessary, was to remove the threaded bolt receivers that are built in from the inner sides of the upright backs of the two seats that would become the two outer sections of the sofa.

These were then relocated and reused to provide secure attachment of the outer sofa seat sections to the central seat by simply drilling through and bolting, along with the solid rods (provided, positioned as designed).

The upright sections of the seats were attached by drilling and bolting together using the bolts provided in two places. So, per each side of the central seat there are three bolts and one factory bar per side. (Sufficient support).

I cut them and drilled them as above to receive my two rebar sections. Once complete, I applied generous amounts of Liquid Nails (a bonding agent) to the threaded rods and into my drilled sockets in the cross-members, forced them together and left them 24 hours to set.

5. Once set, the POÄNG frame was complete (except for the rear supports of the central seat), the triple seat section could now be mounted in the frame and the end arm/leg sections secured using the factory fittings. (looked awesome).

6. I now positioned the previously cut off arm sections against the bottom of the two inner legs. Then, marked them and drilled them to receive four 6mm bolts (in each support) to secure the supports very firmly to the leg sections as this would be where the maximum stress would be exerted on the frame when in use. Captive nuts were used on the underside to give a clean aesthetic finish. 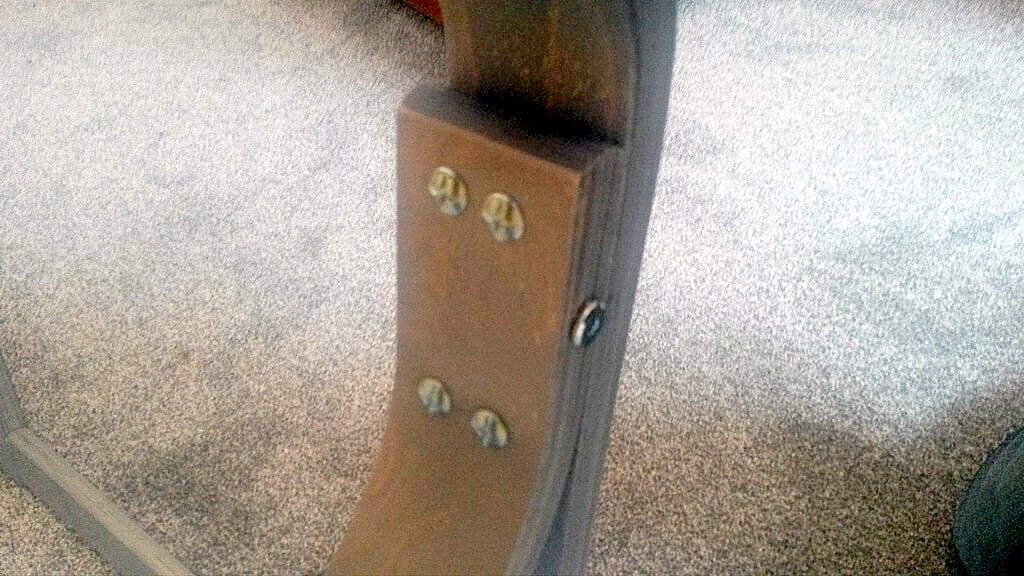 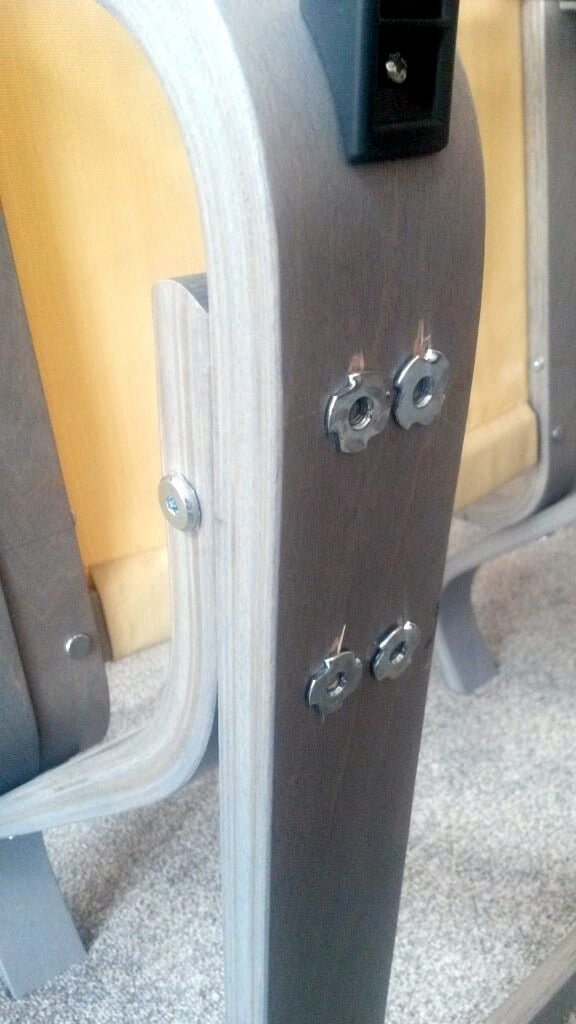 7. Now, what I consider to be the clever bit, the upright sections of the cut off arms now align perfectly between two of the seats. I then marked and drilled through the seats and my support section exactly where the support contacted the seat. These could now be bolted together using my 6mm bolts with captive nuts on the rear (my additional support sections provide a little flexibility and cushioning without a shock absorber which was my primary intent. 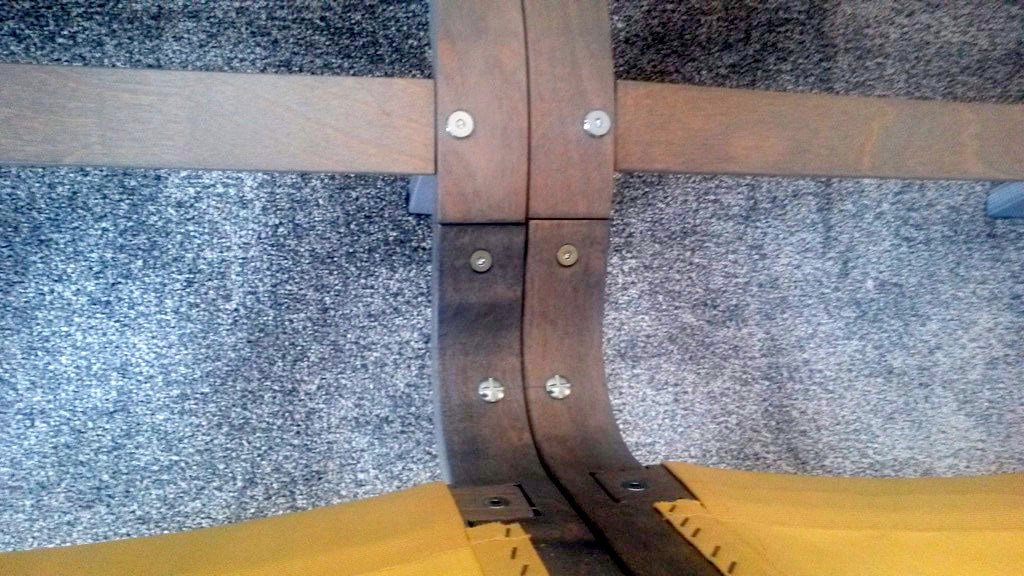 8. My plan was to then cut off the excess arm material curving out of the back of the POÄNG sofa, but I haven’t got around to that yet. (So, you could do that at this stage. I might leave mine as the sofa is positioned against a wall and the upper parts of the supports cannot be seen with the covers attached).

…the damn cat sits on it now instead of destroying it, so mission accomplished i.m.o

9. There is a horizontal hole going completely through the base of the supports, this was intended to receive a bolt that holds the arm to the seat frame, what I did was to cut down four IKEA bolts that were left over and pushed them into four (cut down) wall plugs that I had, and squirted Liquid Nails in the hole before pushing them in place from either side, again just to add to the aesthetics. 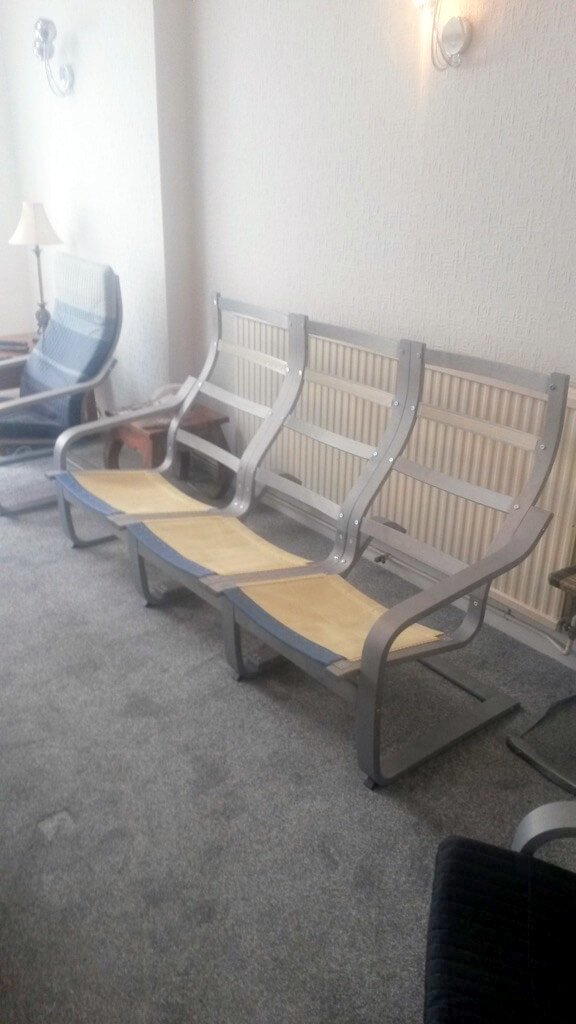 10. So that was about it … until I fitted the seat covers, which showed up that horrible yellow seat base colour, that doesn’t match the covers or seat frame colour at all. So, I quickly dealt with them by cutting out sections of a dark blue table cloth and stapling those along the front edge of the seats, they look much better now.

Hopefully, there you go, that’s how I hacked my POÄNG 3 seat sofa. There are things I would do differently if doing this again. My main regret is that from the contents of my garage and the tools/ materials I had available, I couldn’t come up with a better method for securing the central cross member sections together in such a way as to a provide compressive force (bolting). 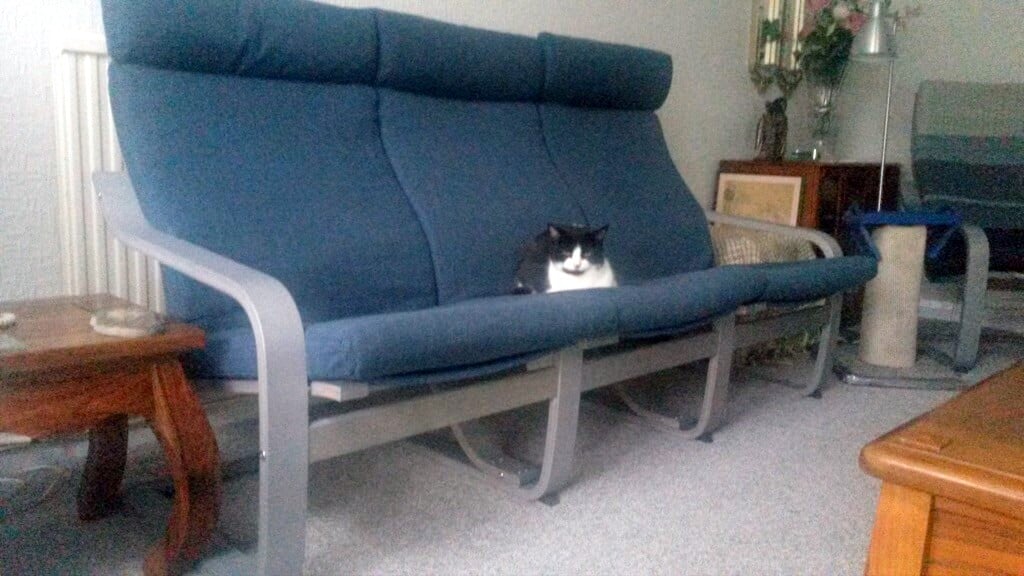 I just used the bonding agent which has so far been sufficient particularly when the central supports were attached. All in all, I am really happy with the result for my first crack at this and the damn cat sits on it now instead of destroying it, so mission accomplished i.m.o. 😊

A closer look at the IKEA POÄNG 3 Seat Sofa

Up next. You may also like these POANG chair hacks