Fitted dishwasher for the Udden

Fitting a dishwasher drawer into the Udden system is quite a feat. Jerome does it with aplomb, even maintaining the brush steel look of the Udden.

“When we upgraded to a new, larger apartment two years ago for our family of now four, we turned down the poor-excuse-for-a kitchen it was going to be fitted with, took the builder’s credit and went with our own selection of Udden free-standing components.

The upside of this relatively inexpensive product line by Ikea designer Ehlén Johansson is the use of honest materials (all durable and recyclable, except for particle board) to achieve a modern, industrial look. Its European space-conscious features are also great, but the downside was the higher cost of outfitting it with matching 24-inch kitchen appliances where we live, in North America.

, keeping only the top Varde drawer for cutlery. The cabinet was too narrow to accommodate the dishwasher. Space was created to specifications by reducing the cabinet to its top third and by designing a platform that is both supported and suspended. I went so far as to use sheets of stainless steel to case in the Dishdrawer on one side. 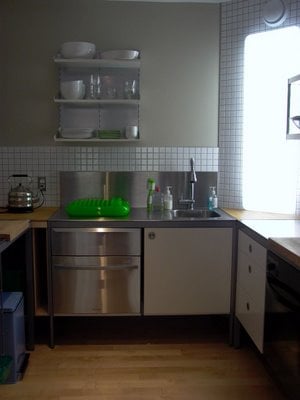 I wanted to share this hack to suggest an alternative dishwasher setup solution for Udden kitchen owners. The smaller dishwasher works for us and it’s a great, if not the only way to keep the clean, off-the-floor look of Udden. 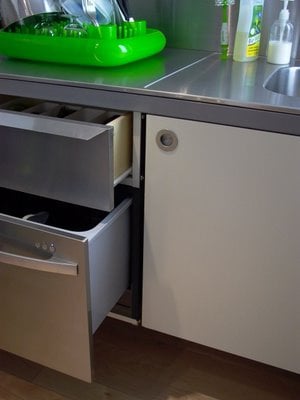 Here’s an overall view of the kitchen and all the Udden components it incorporates. 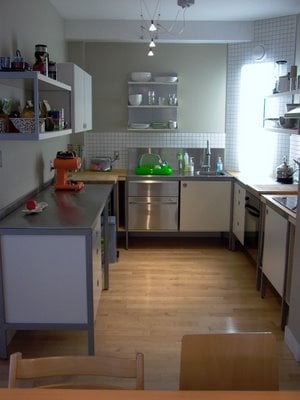 Here’s a close-up of the space I created under the corner counter with an Udden wire shelf to fit our recycling bin (another hack, I suppose).

And you finally get to see my half-width Udden console hack to fit a Miele 24-inch cooktop. Sinking the Numerar countertop (38 mm / 1 1/2″ thickness) into that console to leave only the top 12 mm (1/2″) of it showing (and match the Udden lines) was anything but trivial! 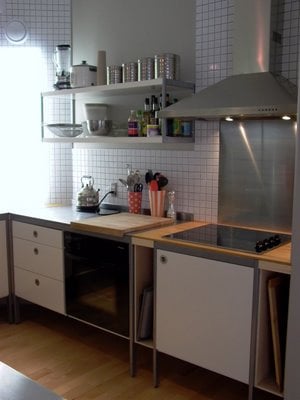 Modeling my entire kitchen on my computer in 3D gave me the confidence that everything would probably fit as planned.

I built custom cabinets to fill the spaces between the consoles. Just what we need to store oven trays, cutting boards and regular trays.

I still have to finalize some finishing touches to apply here and there.

It’s probably hard to tell from the pictures, but I still have not applied the grout to the tiles I set last month.

I want to create a bookshelf in the left corner for our cooking books.

One day, we plan on installing under-counter 24-inch refrigerator and freezer units, under the long counter on the left. The space is there, waiting, and meanwhile we ‘make do’ with a full-size Fisher & Paykel refrigerator, which sits just outside the kitchen space. It was just too obtrusive when it was located in the kitchen. The counter space we gained in the trade-off was well worth it.

This is not a kitchen for everyone. I wanted it to be functional and not just for show. There probably isn’t as much storage as many people would like. (We keep a pantry in the basement.) The intent to downsize and simplify was deliberate. I don’t think it’s OK to spend tens of thousands of dollars on a kitchen.

I now have two modified Varde drawers for sale to anyone interested in doing the same thing.”