Be bright! Get one of these easy-on-the-pocket chandeliers

Stand up for a chandelier
Heather says, “I love a lot of Ikea’s ceiling lamps, but I’m unfortunately a renter of an old-ish building and so attempting to put anything in a wall, let alone a ceiling is a leap of faith I’m not willing to take. 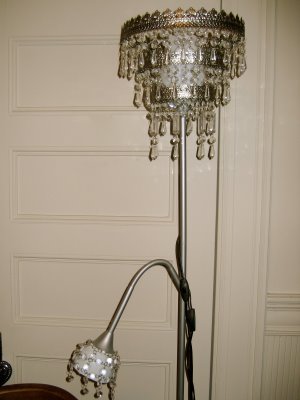 I’ve made a chandelier floor lamp from a number of Ikea products. Starting with the Not Floor uplight/reading lamp which I bought awhile back, I added a ceiling pendant chandelier lamp which no longer seems to be sold on the Ikea site and I can’t remember its name, but I believe I bought it in the past 1 or 2 years. 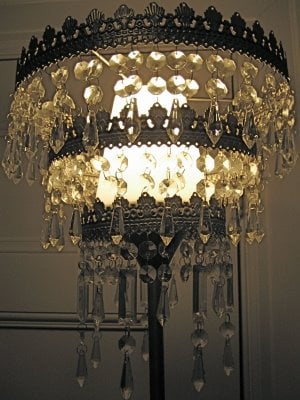 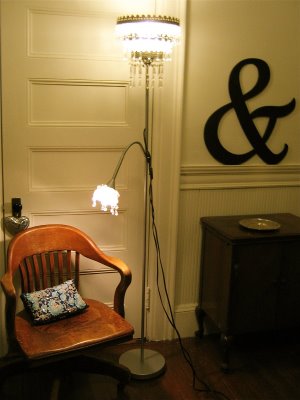 Additional supplies included long plastic crystal garlands which were on sale at Ikea the Christmas before last (all the Christmas decorations have the same name) for about 1.99 each and a small Ikea lamp shade meant for the mini lamps with candle bulbs. I removed the shade from the metal frame of the lamp, glued it to the plastic shade which came with the ceiling lamp and placed it on top of the metal frame of the Not floor lamp. Then I attached the modified (I’ve added some more plastic crystals to the ceiling lamp to make it look more dramatic) over the top of the plastic shade and also chained together some extra plastic crystals to form a netting over the smaller reading lamp.”

DIY antler chandelier
Hank says, “I was looking for a rustic but functional light to put over a dinning table in a mountain cabin. I wanted one of those great looking antler chandeliers you see in all the mountain home magazines. That is until I saw they cost $5,000+. So I bought this Ikea light (Lerdal, I think) and bought some natural shedded antlers and created my own antler chandelier. I am pleased with how it turned out.” 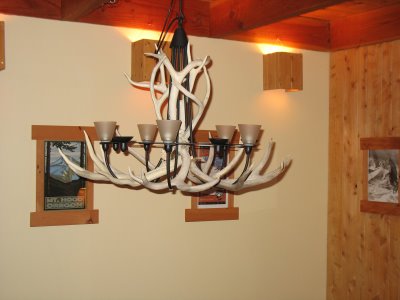 Chandelier gets funky
Guia has this kitschy one. Made from a Jabba clothes dryer. Oh, I can so see it in the blue and green dryers as well. 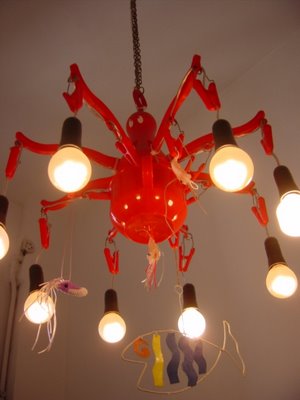 Luxury looking chandelier for much, much less
Alison says, “I just finished a chandelier made from the Rimfrost glass crystal strands. I think it looks more substantial and expensive than the regular Rimfrost lights – plus it has that ‘real’ chandelier shape that I really was looking for. 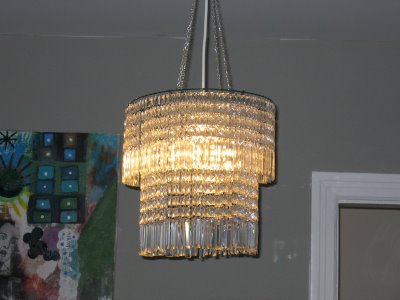 I used 6 Rimfrosts in order to have enough crystals (at only $12 each, it really wasn’t that much for the end result) and everything else was super cheap – a wire wreath form and a jewelry chain, plus some small key rings to attach it and super glue to secure the strands in equal distance apart from each other to make the light look fuller.”