The art of cooking utensils

Michelle gives her laddle, skimmer and spatula the love they deserve by framing them in a Ribba shadow box. I love the idea – it’s a fab way to show off your cooking utensils when not in use, rather than stashing them in the drawer or cramming them in an Ordning. Well, provided they are all shiny with no crusty burnt marks on them, er, like mine.

She says, “I recently moved into a new condo that has a tiny kitchen with extreme lack of counter space. I used to store cooking utensils (laddle, skimmer, spatula, etc) in the Ikea Ordning. But unfortunately, there isn’t anymore room for it on my counter so I thought of a way to hang the utensils instead. 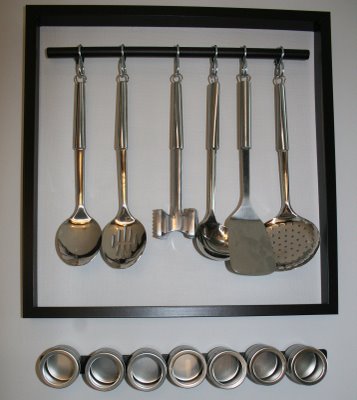 I used a Ribba shadow box with the Lansa black door handle. I had to change some the hardware (shorter screwn, washers, and botls) for the Lansa in order for it to securely fasten onto the board of the Ribba shadow box. I also painted the board that came with the shadow box the same color of the wall (light grey).

Below my utensil holder, I’ve also used the Kroken magnetic knife rack for my spices. The containers for the spices came from Canadian Tire.

This solution has been a big help in kitchen. Hopefully it’ll help a lot of other people who have little to no counter space.”