Ah, I love these 2 hacks from Sarah. The first is a really cool cooking prep space and the second is a smart tweak of the circular bed into a cosy area.

She says, “I wanted to put a bowl in this Ikea kitchen cart (Forhoja) so I could chop things and shove them right into the prep bowl. Then, once you take out the bowl, you can shove the trash into the drawer underneath (lined with plastic) to bring to the trash. Originally I was going to install a whole trashcan beneath the hole, but I think this is less disgusting than having a festering pile of whatever under there.

First, we measured out where we wanted the bowl and how big the bowl was. We drilled screws through part of the table that would be discarded to hold it to the scrap board that was underneath and clamped the rest of the table to the underlying board. Next we routed completely through the top of the cutting board. Once that was complete (which was actually quite difficult and required a lot of fiddling with the bit, since the cutting board is quite thick), we did the second-order routing or the lip that insets the bowl so it is the same height as the cutting surface. Once that’s done, all that’s left is sanding!” 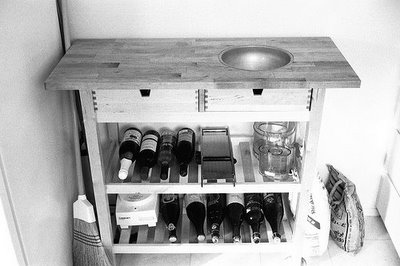 “A friend of mine moved half of her circular Ikea bed (Sandane) into our living room while she’s subletting. For a while it was just sitting there together as a single unit, until another friend thought it would be funny to shift the pieces apart and have them like armrests while you sat between them on the floor. That got me to thinking that what would be even cooler would be to have a table there!

So dad and I threw one together this weekend. It’s about the simplest possible table you could make. We got one pine board (10 feet by 1 foot by 1 inch) cut into 4 pieces (two 40 inch and two 20 inch) and connected them all up using corner brackets. The boards were slightly warped, so we tried to use the brackets in a way that would pull the pieces together, to moderately successful effect. Not the most elegant, but it should keep it together. Since 20 inches was slightly higher than I had been envisioning, we alternated which corner was on top, cutting out about an inch. Just needs some final sanding and stain and it’ll be done.” 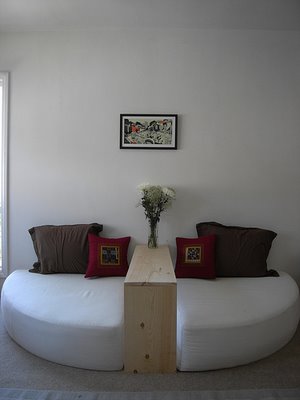