Is the Ikea pencil going the way of the Dodo?

Well, I’ve not jumped onto the iPhone

bandwagon but iPhone apps have jumped into Ikea. Two app developers wrote me about their Ikea shopping apps which are great for replacing the Ikea pencil and shopping list. Personally I love scribbling with that stubby pencil. It’s part of Ikea experience. Heh.

SwedeShop
The first is from Danilo who claims to be a big nerd who programs for the iPhone and loves Ikea. You can guess where this is going.

Danilo tells me, “The golf pencil and shopping list they hand out at Ikea don’t cut it for me. I built an app called SwedeShop that keeps track of your Ikea shopping list for you. Here are some screenshots: 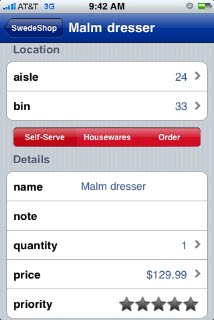 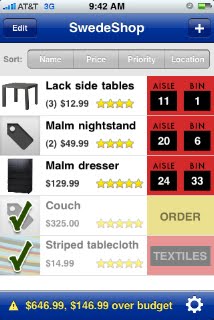 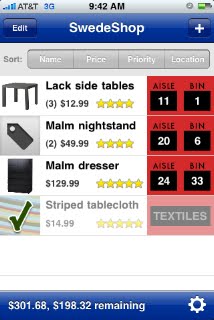 Tap out the item name, set a price and dial in the aisle and bin. And you’re done. Optionally, you can set other attributes, like notes, priority or an item image. SwedeShop minds your budget for you and vibrates if you go over. It supports all international formatting and has been localized into English as well as Swedish for good measure.

And that’s about it.

SwedeShop launches on Tuesday. It’ll be free for one day and cost $0.99 thereafter.”

See more of the SwedeShop.

iShopFlat
The other is from Jonathan, called the iShopFlat. Jonathan says, “Living in Sweden I see a lot of Ikea stuff. Now I did something I thought was funny and good for the environment. We did a small app to replace the shopping list at Ikea. It’s called iShopFlat and is available on the iPhone AppStore.

Basically it mimics the list you find at the entrance of the Ikea store but also lets you check the price of your items as you go along.”