Carley’s lucky puppies are getting a happy feeding station.

“We are adding a new Golden Retriever puppy, to be named Jaxon (pr. Jackson) to our family in a couple weeks. We already have one Golden named Jewel, who eats from an elevated food dish. Rather than drop another $25 on another ugly set, my husband and I decided that we would rather build one which we thought would at least be more aesthetically pleasing.

We were trying to figure out where we could get the wood for cheaper than is available at Home Depot, and then realized that we had a half-stained Fjus book shelf that we were just going to get rid of. We cut that up, sawed some holes for the bowls, then left a space large enough to place a small Trofast storage bin. 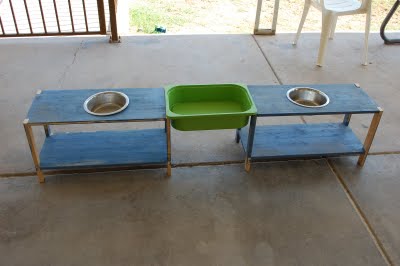 After making a trip to Home Depot to pick up some brown paint and one more piece of wood for the front (which we got cut for free), we came home and nailed the front panels on. We then added a personal touch by adding their names and bone/mod designs and Voila! 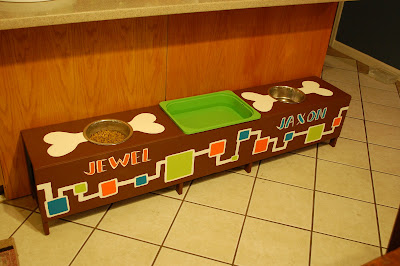 We’re pleased with the way it turned out, as is the dog (picture below), although we are thinking about adding doors on the two open sides, and maybe adding a watering system so we can hook up a reservoir. Perhaps sometime in the near future, we’ve still got other projects to work on.

You may ask whether the feeder is too high for a puppy. Nope, that was my first reaction when we got our first elevated feeder for Jewel when she was the same size as our new puppy, but she just hopped up with her front paws and chowed down. Also, Jaxon is already used to an elevated feeder since the breeder uses one (keeps the puppies from falling asleep in their food or drowning in their water). 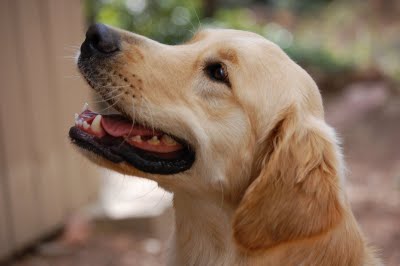 Cost breakdown:
Shelf (thus wood/hardware) – FREE (although we did spend the $35 but we’ve had it for so long and we were just going to throw it away anyway)
Bowls – FREE (already had, but they’re super cheap to buy)
Water bin – $3
Extra wood for front panels – $8
Paint – $13 Total: $59 (including cost of shelf) We really only count $24 though since the shelf was re-purposed.

You may also want to check out these elevated dog feeder hacks:
– It’s a dining table for pooch
– Elevated dog bowl for $22
– Raise the dining standards for your dog