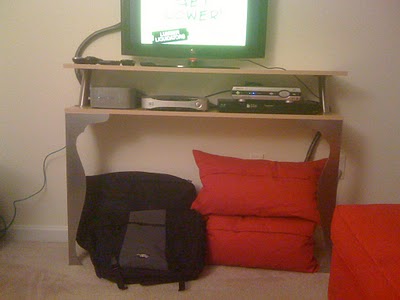 Description: We have a tiny den. We had an Expedit bookshelf, Ektorp couch and a Kivik ottoman and couldn’t get in the room! So we needed a small entertainment center to house our TV and devices. We didn’t like anything we saw, so here’s what we came up with.

1) We attached 2 Vika Fintorp legs to the front of the Ekby Osten shelf (46in). We could’ve used the cheaper Vika Curry legs but these have a bit of flair!

2) The Capita brackets have a cool slanted design and are designed to attach on top and bottom so they were a great choice to attach a second shelf.

3) Use wall brackets to attach the unit to the wall, (because the shelf isn’t wide enough for 2 sets of legs).

In the end we have an entertainment center that gave us lots of extra storage space and at a mere $42 it’s a bargain!