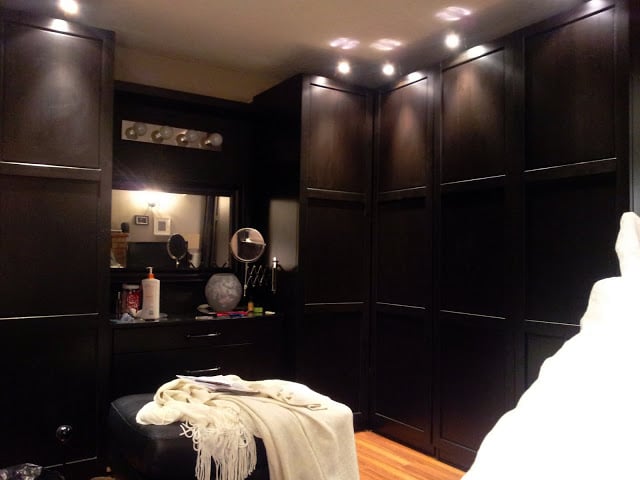 Description: I moved into a basement apartment that didn’t have any closet space or space to apply makeup etc. Being a fairly girly girl I wanted to have a closet *palace* not just a closet. I already had three 100cm Pax frames and interior fittings, so I devised a way to make utilize the space I do have as best as possible.

My first obstacle was the corner unit. I have the 201 cm Pax units and as it turns out, they don’t make the add-on in that height. We trimmed the side and back pieces down in height using a skill saw. Then we re drilled the appropriate holes across the top of the pieces so it would fit together. A good way to do this is to put your drill in an IKEA hole on the unit and mark the depth of the hole with masking tape. You put the masking tape on the drill bit so you can’t drill through the unit and ruin it.

Once trimmed, I assembled the Pax wardrobes as usual.

My second obstacle was that the wall space where I wanted to put the vanity mirror was a built in shelf. To overcome this problem, I got the idea of nailing a Solveig bamboo panel over the unit. I created spacers out of some leftover Pax shelf pieces** and bolted them to the wall. I built an L shaped frame out of 1×4 (to mount the mirror on) and mounted that to the side of the built in, and to one of the horizontal shelves. I bought a cheap vanity light at home depot and rewired it to be a plug-in, which I then similarly mounted onto the built-in shelf. I cut the appropriate holes in the Solveig panel and nailed it around the frame and the light to cover the built-in bookshelf. Problem solved!

I really wanted to use the Komplement chest of drawers because it had the best height/length ratio and because the divided top drawer is perfect for displaying makeup.

I assembled the Komplement interior chest of drawers according to the instructions. I didn’t realize it has no back, and is meant to be bolted to the floor of a Pax wardrobe. This makes it very unstable. I built a frame of some leftover Pax wardrobe fronts. **

Luckily, because the chest of drawers has no back, I was able to put a powerstrip in the bottom drawer and plug everything in to the power strip. My lights are on ZWave wireless adapters to be controlled via remote control. My hair styling tools stay in the bottom drawer and plug into the power strip for use. I mounted a Frack mirror to the side of one of my Pax frames for precise makeup application. It’s awesome!

The last thing I needed to do was trim the lack shelf to the appropriate length and mount it to the wall with molly bolts.

Additional accessories include the Grundtal pot lights, which are installed to a Zwave adapter for remote control. The Karlstad footstool and chrome underframe, the Gurli throw and Hemnes mirror. I used Fintorp handles, and plan to put the handles on the Hemnes doors as well, unfortunately my IKEA didn’t have enough.

** While I was renovating the apartment a sewage backup occurred in a different area of the apartment, where I happened to be storing the pax wardrobe. I was able to get some new frames and had leftover parts that were not water damaged.