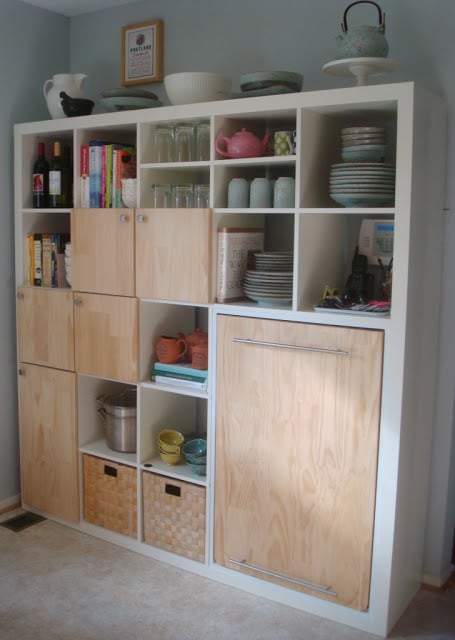 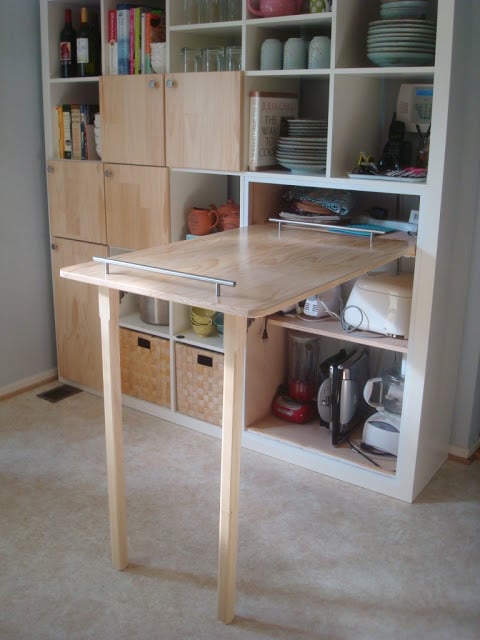 Description: Our small kitchen was meant to be an eat-in kitchen despite its very modest size and the fact that it’s right next to the dining room. So for the last two years we had a collection of random hand me down kitchen carts and shelves on the empty wall to hold all our cookbooks, pots, pans, and assorted gadgets. When I saw this post by K. Klose: I was inspired by the simplicity of it, but wanted to add a few more features including a pull-out counter top.

The difficulty was that counter height is in between the second and third shelf so a simple hinging counter would not do. I imagined that the edge of the counter would have to pivot about a point and then slide down a track to lock at the correct height. After I figured the theory out, I called my dad who worked out the details, built the counter carcass and cut the doors, and brought it all up to assemble on site (I helped with that part).

The actual counter sits in its own specially made box that slides inside the Expedit. We had to cut out two set of shelves from the Expedit, which we marked and cut out as we were assembling the whole (we assembled the whole Expedit as we wanted, then slid in the ready-made counter box). The top end of the counter is attached to a metal bar, the ends of which slide down channels cut into the sides of the box. The bottom of the channel is counter top height (account for the height of the bottom of the Expedit when measuring). The legs were affixed to the other end of the counter with double-locking hinges (they lock both closed and open – no sudden collapsing). 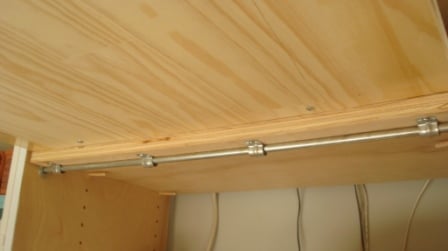 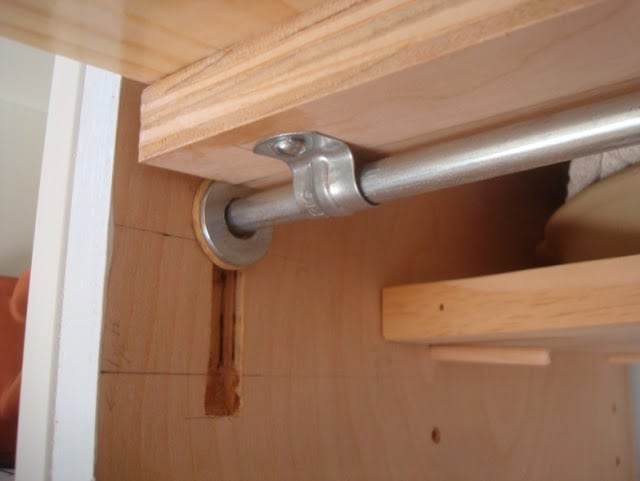 Opening and closing the counter is very manual and requires the two bar handles at the ends of the counter to pivot and lift. We could have used a spring assembly, but it would have eaten more of the interior space behind the counter where we now store all of our small appliances. When the counter is opened up there is a small shelf just level with it which has a power strip on it. Any small appliance needed can be used right on the counter and easily plugged in.

The counter and doors are all the same wood. As stated in the first Expedit kitchen storage post, you can’t hinge doors on the outer shell of the shelves, so ours tend to open in random directions. We also added two extra shelves near the top. We just took some of the vertical shelves we didn’t need from the counter section and turned them sideways and drilled holes for the dowels at the height we wanted.

After we were done I painted the edge of the counter box white to match the Expedit, filled it with all our kitchen stuff, then sat on the stool and admired it. And then I took my dad out to a very nice dinner.

The wood and hardware for the hack added up to about $150 US. Expert labor was free. 🙂