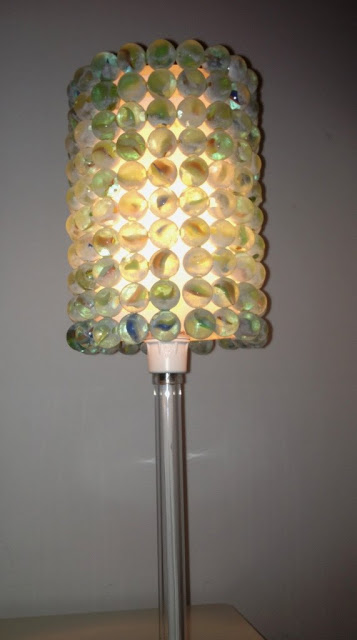 Description: Ikea has produced a number of cheap but cool retro table lamps that consisted of a metal round base with a cylindrical lampshade of clear faceted glass resting on a matte plastic cylinder that acted as both support and light diffuser. This design – base, plastic cylinder and glass lampshade – seems to be a standard design for many Ikea table lamps.

Unfortunately, these models tended to be top-heavy and I soon found myself with a perfectly functioning lamp base, a matted polypropylene cylinder and a bag full of broken glass.

If you have a similar broken lamp, here’s a quick hack for you. You’ll need glass marbles and a bottle of Krazyglue (also called superglue or one-second glue. 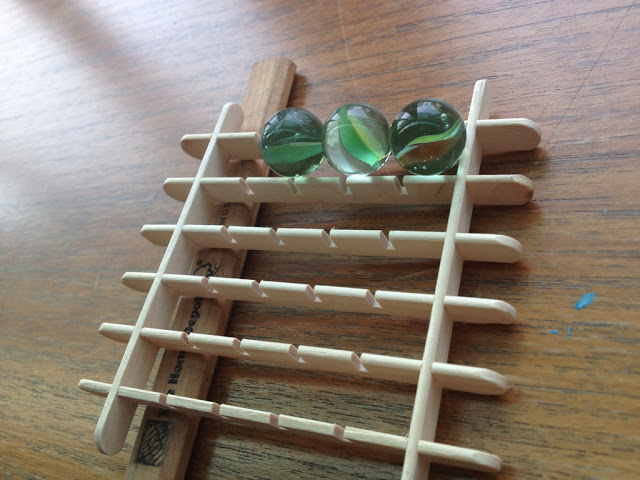 1. Measure your marbles and figure out how many you’ll need to cover the cylinder in a straight line from top to bottom. Allow the marbles to extend a little bit beyond the end of the cylinder.

2. Sand the outer surface of the polypropylene cylinder with fine sandpaper (240 grit or finer).

3. (optional) Sand the inside of the cylinder lightly as well. Spread a thin layer of glow-in-the-dark paint on the inside and gently roll the cylinder to create an even coating. This will make your lamp glow for a while after it is switched off. If the coating dries unevenly, don’t worry. This will create a “marbled” glowing look that is quite attractive. Let the paint dry before continuing.

4. Create a simple rig of strips of wood or a plastic gutter that allows you to line up a row of marbles in a straight line. Place the rig at an angle, so that the marbles are touching each other and don’t roll away.

5. Very carefully, place a small drop of glue between two marbles and allow them to roll against each other. The surface tension will tend to spread excess glue over the whole surface of the marble, so use the glue sparingly. Continue to create a “strip” of marbles that are glued together in a straight line until you have enough to cover your lampshade. Since this glue dries almost instantly, you can do this quite quickly and efficiently. Don’t worry if some marbles are acquiring a dull film of glue – you can remove this later.

7. Add the next row of marbles. Make sure you stay parallel and that the rows extend the same amount beyond the top and bottom of the cylinder. Place glue between marbles and cylinder, and also between the marbles of the rows. Don’t worry about the film of excess glue that will appear.

8. Work your way around the cylinder by adding row after row. Correct small discrepancies by allowing a bit more space between rows. Stop after you’ve finished 1/3 of the circumference.

9. Using individual marbles for measurement, figure out how many more rows of marbles you need to go all the way around the cylinder. Try to avoid ending up with a large gap between the first and last row of marbles but try to adjust the spacing of the remaining rows to gradually lose that extra space.

10. Let the glue settle a bit and brush marbles gently with a dry kitchen sponge to remove any film of superglue.

This lamp is not suitable for young children. Marbles may come off and could be swallowed.