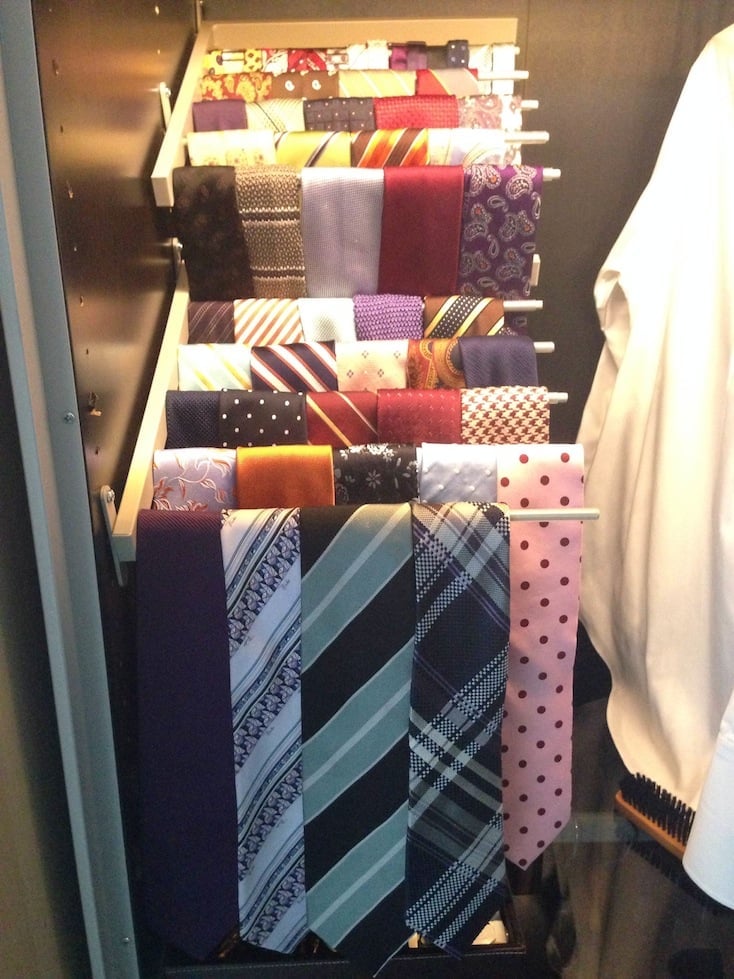 Description: I have a problem. I own a lot of ties (somewhere north of 70 including around 18 bow ties). Far too many for any “over the counter” tie racks I’ve found. I had been using the three-tiered Komplement pull out “multi-use” hanger, but as you can see, it was filled way beyond capacity and impossible to keep organized.

My plan was just to use a few of the small Komplement pants hangers (the 13″ one, not the 28″ one), but the way they’re designed would have made it impossible to see which tie was which, much less get them in and out. First I needed to mount them 90-degrees from where they’re designed to be mounted– so the bars run across, instead of pointing at you. Second, in order to actually see all the ties, and access them more easily, it made sense to mount them at an angle. Finally, I realized that would allow me to use the full depth of my Pax wardrobe. The stock pants hanger only mounts in the forward shelf holes, but since I am drilling my own holes, I can have one in the back and one in front, and the angle allows me to see all the ties at once. 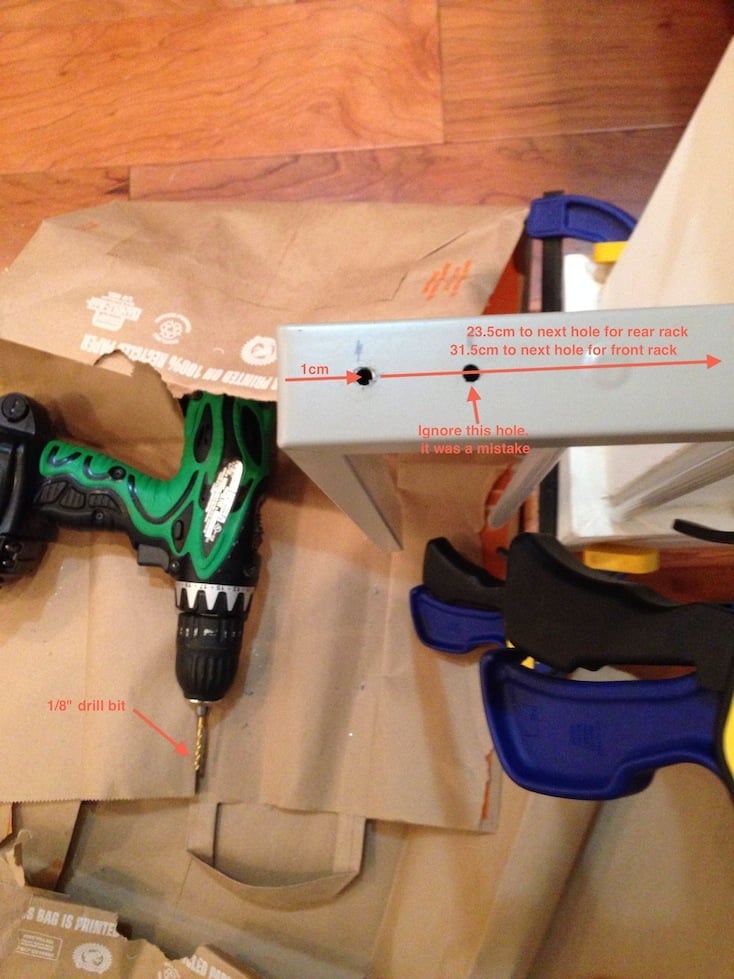 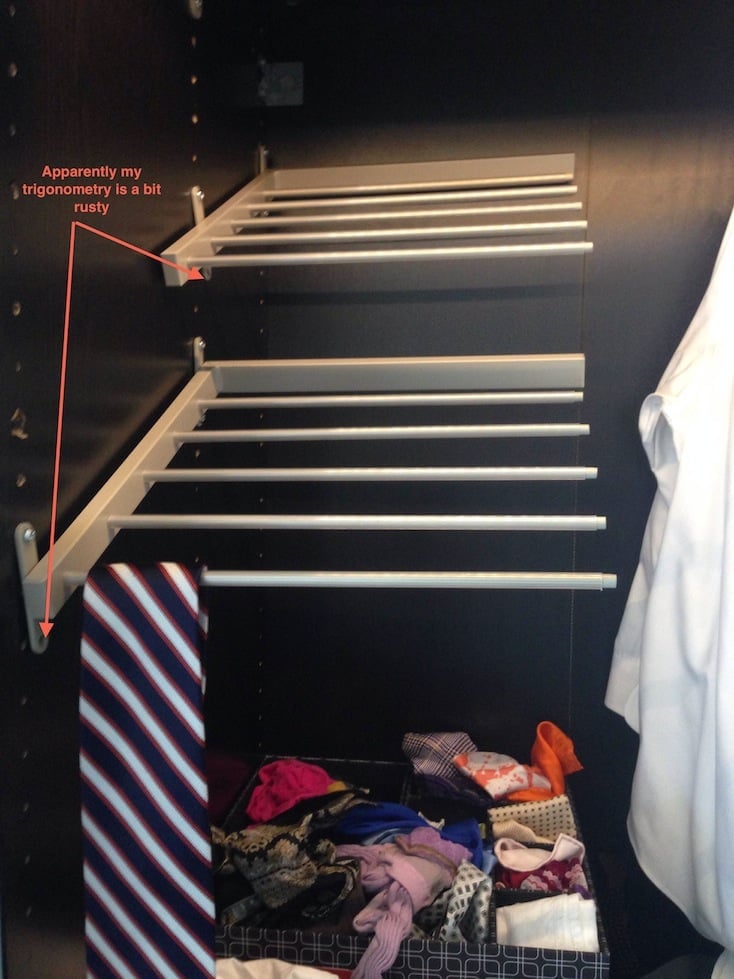 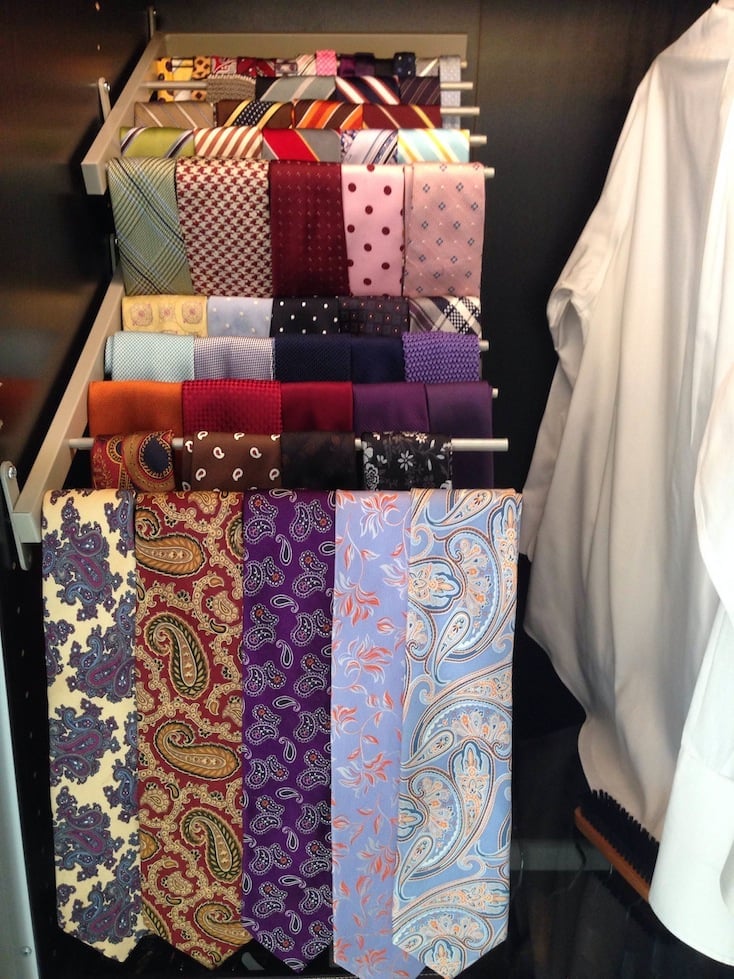 I measured the width between the holes, front and back, as well as the hight from the hole I wanted to use in the back, to the lower one I wanted to use in the front, and, doing my best Pythagoras impression tried to measure the hypotenuse to drill in the right spot. I was close, but as you can see from the photo, my trigonometry ain’t what it used to be. I drilled 1/8″ holes 1cm in from the back edge of each rack. Then I drilled another hole 23.5cm from that hole for the rack for in the rear of my wardrobe, and drilled 31.5cm apart for the rack in the front of the wardrobe. Using sheet metal screws I attached the small plates that come with the pants hanger to mount to the wardrobe.

Once installed, the only problem left was how best to sort my ties. I started with something basic– sorting by color and pattern. But, since High Fidelity is one of my favorite movies, one of my friends suggested I get a little crazy and sort them autobiographically… so that’s what I did. I’m going with it! Don’t judge me. 🙂