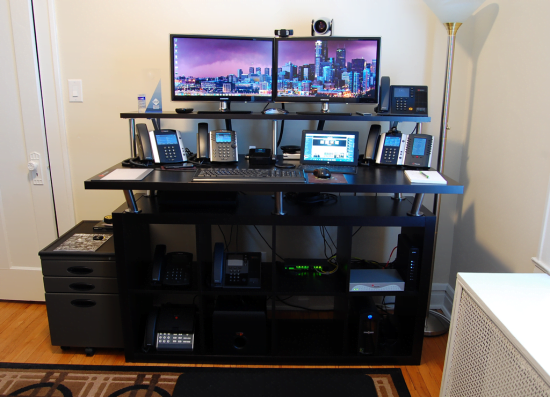 For the basic design I used a desk by Thibaut Colar as a template. The main difference is that instead of gluing two smaller square EXPEDIT bookcases together it was easier to simply purchase a single wider bookcase of basically the same overall dimensions. My desk also has a uniform width (59”) from top to bottom by matching a tabletop with the same dimension as the bookcase and the bookshelf. This allowed for the main table supports to be moved out to the corners for better stability. Other differences are that I omitted the feet for my personal height requirement and I also added a custom monitor stand.

For the monitor stand I found Eric McKiddie’s custom desk to be the best option. His design used separate bookcases turned 90 degrees which was an approach I considered but in the end I wanted the cubes facing forward for stashing some of the many IP phones I have in my office.

A complete walkthrough of the build with many photos can be found in this blog article.