HOL Storage plus Desk for kids 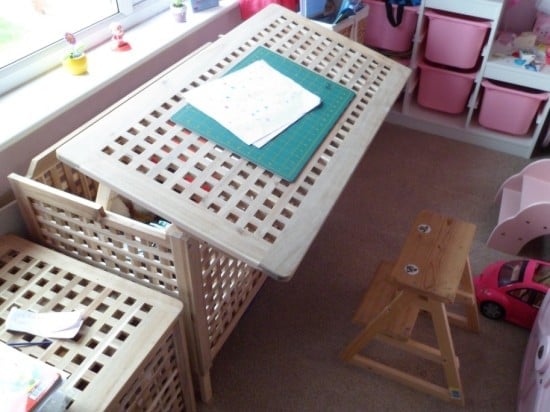 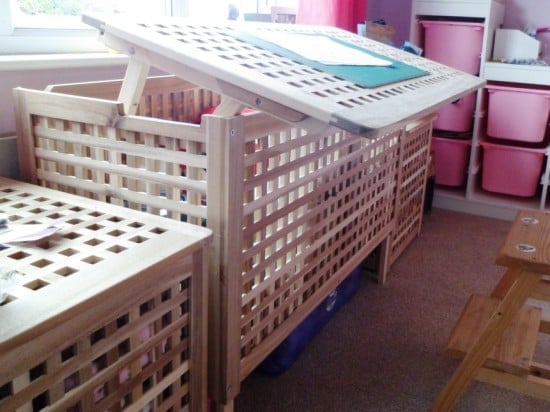 We have a new baby on the way, so the box room has become a nursery.

My daughter’s separate desk and toy box needed to move out of the spare room and into her bedroom. The problem was there wasn’t enough room for both. So either one had to go, or I had to come up with something that could fill both roles.

I researched desk/toy box combos and whilst they do exist, they don’t quite fit the bill, either being too expensive, or themselves too big.

My solution is the HOL Desk, which functions as intended (a large storage box) and also as a desk (incorporating leg room and a sloped work surface) – I have also adapted the design of the HOL to have a hinged lid as oppose to its default removable lid.

For my design, I used the larger HOL storage box, but I think it could also be modified to work on the smaller HOL unit too.

The main design problems faced where:

– How to have both a functioning lid and a mechanism for tilting/bringing forward the lid to accommodate leg room.
– How to lift the box up to a practical working desk height.
– How to make it safe(ish).

My final design involved adding four legs to raise the desk (which handily left just enough room underneath for a standard, under-bed storage box), creating a lift/tilt mechanism that is firmly attached to the main body of the box and to the lid via hinges (to allow the lid to function as a rear hinged lid) and incorporating a way to ensure the risk of trapped fingers is reduced (if not entirely removed). The mechanism works by joining two horizontal strips of wood together, using two other strips of wood that are different lengths. This results in them being parallel when ‘closed’ and at an angle when open. Hopefully by looking at the images, you will see this for yourself.

I had already thought of an idea for how the desk would work in my head but to test the theory, I used a free, non-commercial program to design in principle the lift/tilt mechanism, called Linkage. Linkage, to quote from the manual “…is a computer program that lets you design and edit a two dimensional mechanism and then simulate the movement of that mechanism”. You can see my proof of concept results in the first image. 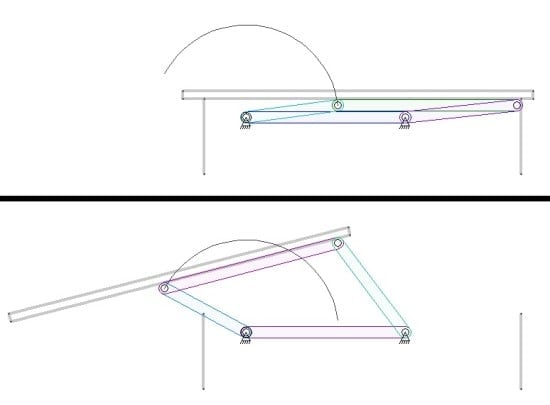 Note that I needed two finished mechanisms – one for each side and a mirror image of each other.

I took the design to my garage and improvised/tweaked the design as I went along. There are some constants to the measurements as outlined below, but you can adjust certain things to your taste as this design can be highly modified to produce more or less leg room and a greater or lesser angle on the lid. Shortening both arms at the same ratio will produce less leg room, lengthening them will produce more. Increasing the length of rear arm will increase the angle. Legs can be lengthened, shortened or removed from the design without any additional adjustment to the mechanism. Play around with various designs using lolly sticks or card to make scaled down versions before moving onto the real project. Anyway, here’s what I ended up with:

2x lengths of timber for the bottom part of the mechanism (1 for each side) – The length of these is the same as the inside width of the assembled HOL. This part is eventually affixed to the inside of the HOL via wood glue and a screw at each end, pre drilled and counter sunk for neatness and to ensure the wood does not split (assume this for all screws from now on). This beam also rests on top of the legs for additional support (probably not required, but might as well add it in as it makes the legs look neat and adds to the stability). You can see this in the images. Note that the bolts you can see are pushed through from the ‘hidden side prior to fixing in place and that the wood is counter sunk to accommodate the head of the bold. In this way, it does not have to pass through the wood of the HOL unit for neatness, although it could if you wanted.

2x short lengths for the front arm. These are joined to the above length via one of the bolts. The ends of this are also rounded off with the bolt passing through the ‘centre’ of this rounded area both for neatness, and to allow free movement between it and the lid.

2x slightly longer lengths for the rear arm. Again rounded off and attached via a bolt.

2x lengths of timber for the top part of the mechanism. This is attached first to each arm in a suitable position via bolts, such so that the top and bottom pieces are horizontal and flush when in the closed position. The rear of this arm is flush with the outside rear edge of the HOL (it is sunk into the HOL via a notch as explained later and rest inside this notch for support). The front edge is tapered to prevent it from being obstructed during the lift/tilt movement but is also about 20mm or so shorter than the inside measurement of the HOL when assembled.

2x small pieces of wood. You can see these in the image – they’re attached to the rear of the top length of each wood via glue and a screw. This is basically to provide enough room and stability for the hinge to attach to.

2x ‘handles’. These again can be seen in the photo and again attach to the top length of wood in the same way. I actually ended up using some strips of wood cut from another HOL lid (a project to make the lid the same size as the box so as to fit one inside my wardrobe) instead of the timber. This helps it blend a little better. These go near the front and are used to gain purchase when tilting the lid forward by gripping both the bottom of the handle and the top of the lid together at the same time and lifting – it’s sounds complicated, but my 6yr old daughter can do it, so it’s really not difficult at all.

Prior to assembly, I cut a notch into each of the side panels, near the front, to accommodate the ‘handles’. These handles should protrude out the side of the HOL and end flush with the sides of the lid. In addition, I also cut out a notch at both ends of the rear panel with a jigsaw to accommodate the top length of the mechanism including the hinge supports, which as you can see in the images, rests inside this notch for added support and to ensure the hinges can be attached correctly. The top length of the mechanism should be flush with the rear panel so that the hinge placement is in line with the rear edge. I finished these notches by sanding them smooth

4x length of timber for the legs. I cut the corners off the base plate for the HOL to accommodate the legs prior to assembly. The length is down to preference or you may even choose not to have legs. I also cut a corner off the top of each leg for neatness when the mechanism sits on top of it.

All wood is sanded down along the edges and the newly cut ends to remove any splinters/sharp edges. Where wood is in a fixed position, it is glued and screwed. The mechanism is bolted together tight enough to provide some tension but loose enough for smooth operation. 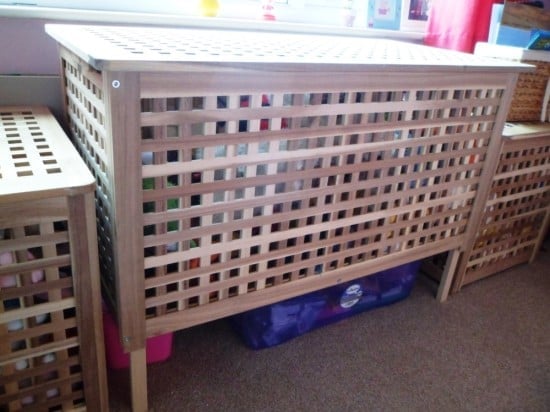 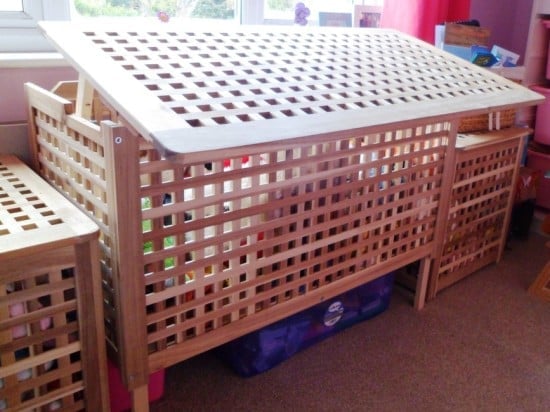 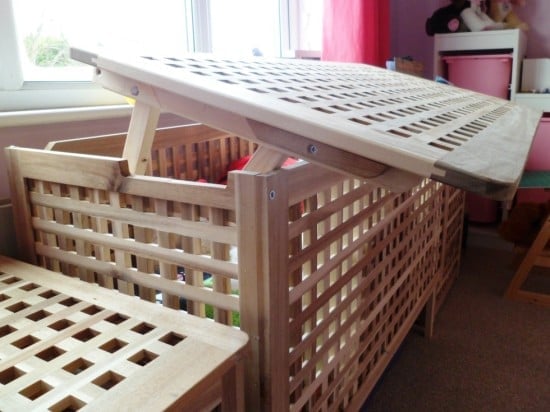 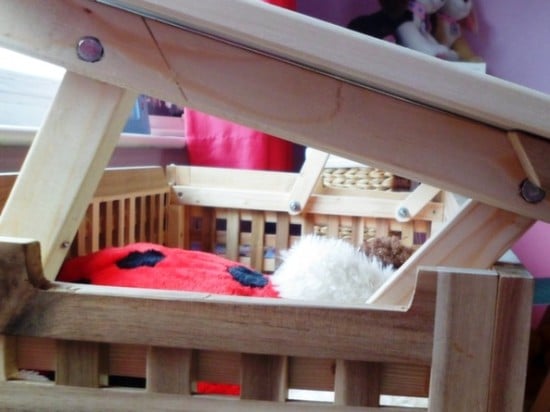 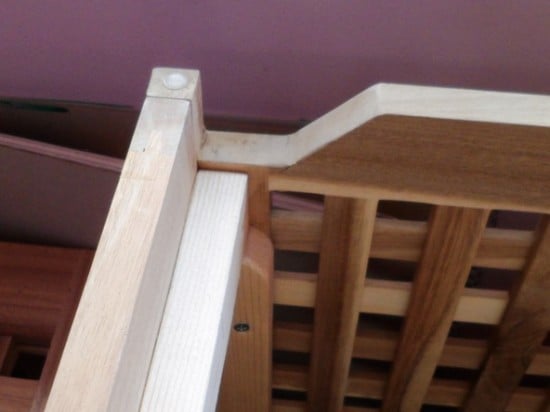 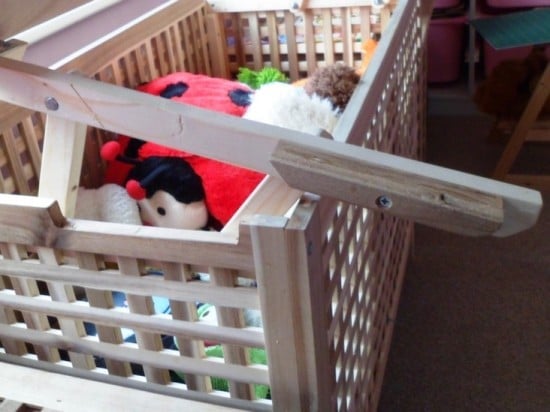 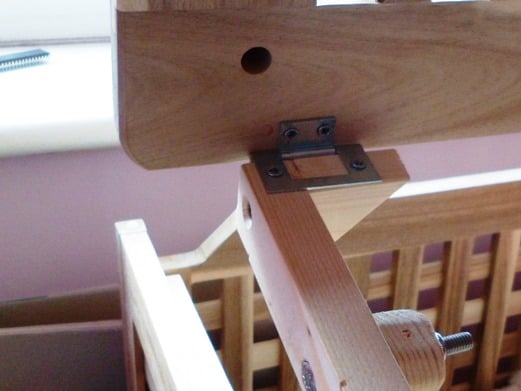 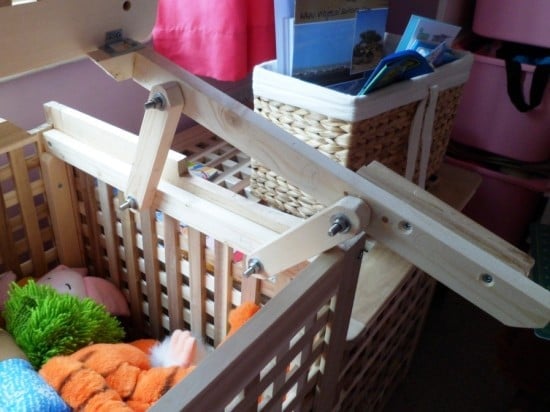 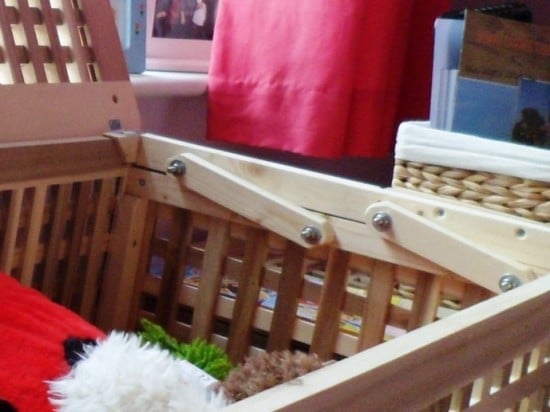 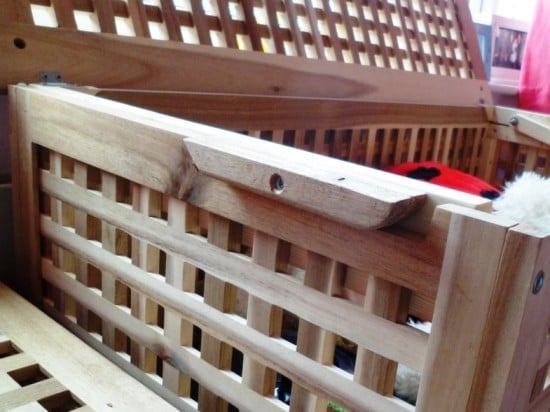 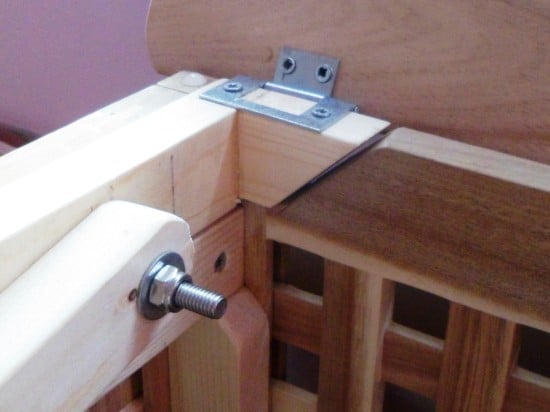 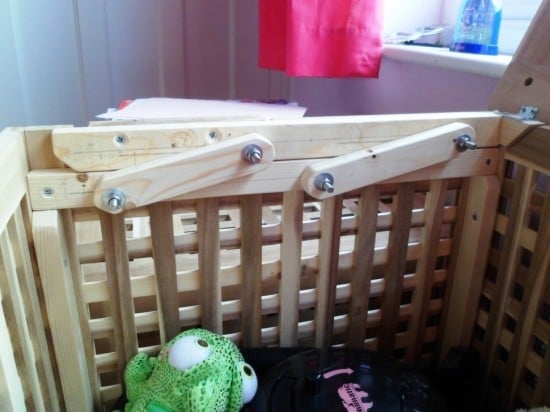 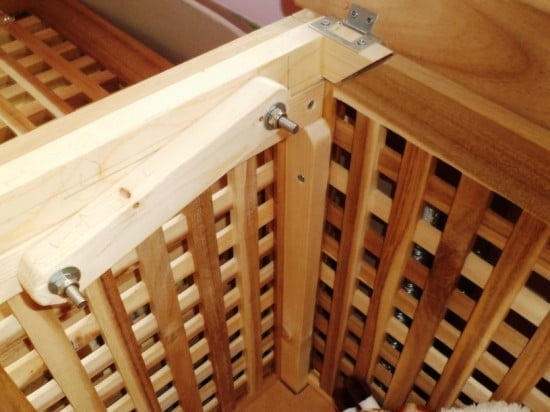 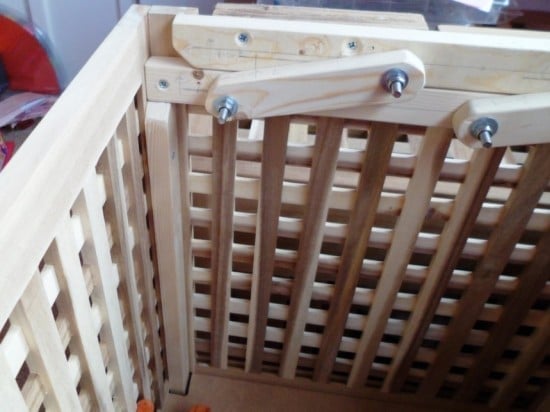 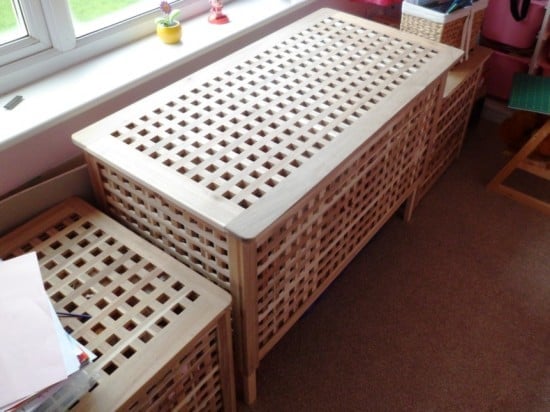 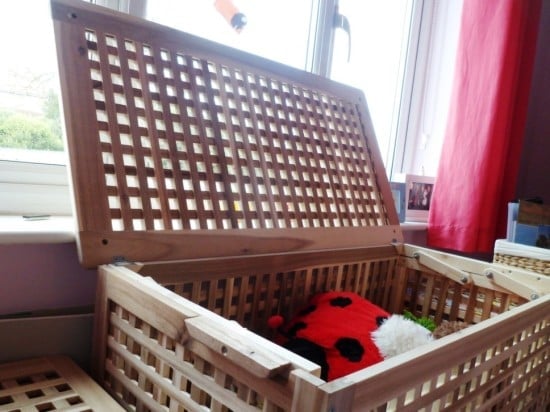 That’s all there is to it. Mostly guess work and personal preference on the lengths of wood used to gain the desired angle and leg space. Look at the images for further guidance.

This is only a first attempt at this desk. I have just placed a cutting mat on top for now as a work surface but plan to add a piece of hardboard later (with square ‘keys’ to locate it into the HOL lid so it can be easily removed/swapped out), as well as a hole or two to accommodate a pencil holder and also a slightly raised edge at the bottom to stop paper and pencils from rolling off (probably using one of the edges from the other HOL project I mentioned earlier).