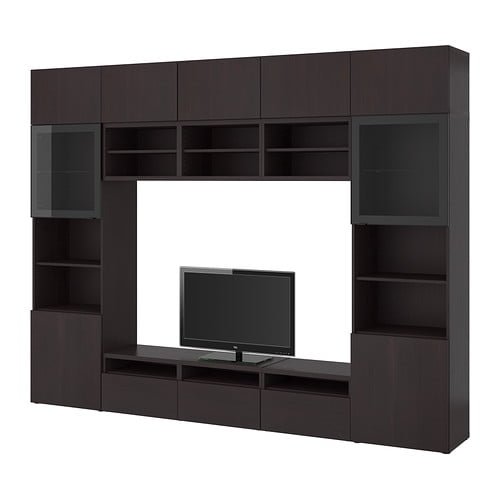 My name is Nick and I’ve got a kind of odd issue I am dealing with and I wonders if you (or the crowd) had any advice. I have a standard Besta TV storage setup that looks just like this. (photo above)

The only difference is that what I have does not have the second row of shelves at the top.

My issue is that I need to put a flat shelf underneath the top row of center shelves so that they can all be scooted out from the wall about 3-4″ in order to have enough room for all the plugs that come out of the back of the receiver I just purchased. (I don’t want to out the receiver on the bottom shelves because of kiddos who would gleefully destroy it, heh.) So: basically what I need is a sturdy-ish Ikea piece that is 70 7/8″ long or longer and which comes in the black-brown that matches the Besta I have.

There is a Besta Vara door that is 50 3/8″ and which could be made to work with some other brackets, etc, but it would be much easier if I could get something else that was long enough that I could disguise the brackets holding it off to the side and avoid having to accommodate that the door-shelf isn’t really long enough. Any suggestions on any other pieces that might be long enough to work?

Thanks so much in advance,