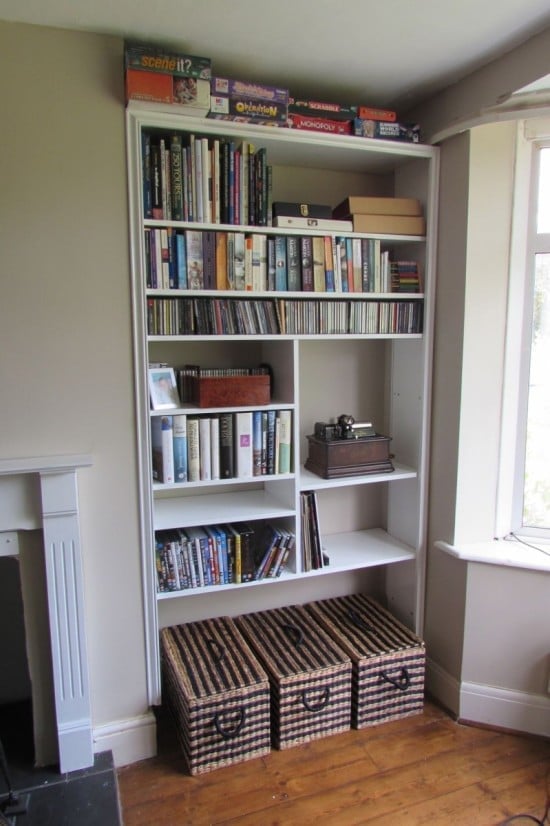 The living room alcove by the chimney breast had long been the home to an old Billy bookcase. But as the Billy was too small to make best use of the space, a decision to redecorate the entire room seemed a good excuse to install a fitted unit.

I liked the flexibility of being able to adjust the Billy’s shelves and wanted the new unit to have the same feature. I approached a carpenter about having side panels custom made with pre-drilled holes for metal studs, but when he took no interest in the work I thought ‘why don’t I just use the panels from the Billy?’

My first big decision was to attach the panels directly to the walls of the alcove using masonry screws. I thought this would be easier than building a freestanding unit (given my limited carpentry skills), although I was worried that I might not be able to adequately line up the panels. However, by measuring carefully from the back of the alcove I found this to be surprisingly straightforward (especially given the lack of straight lines and square corners in our 1930s house). A good way I found of making sure the panels were the same height from the floor was to balance them on children’s building blocks before drilling the first hole through the panel and into the wall. I used six masonry screws for each side, and drilled though the larger holes you’ll find already in the panels.

(TIP: Walls in older houses are likely to have been re-plastered at some time, with metal mesh put under the new plaster at corners. You should therefore take care when drilling holes near the edge of the alcove.)

The next step was to make shelves to reach to the back of the alcove, and I found pine boards that were perfect for the job. Cutting these to fit between the side panels proved something of a challenge given the aforementioned lack of straight lines in the house. I was also careful to make sure they didn’t fit too snugly so that they could be easily moved when adjusting shelf position.

I gave the shelves an L-profile at the ends so they could hook behind the side panels for added stability. Though not particularly difficult to do, I’d say this wasn’t absolutely necessary.

The vertical board used in the lower half of the unit is held in position by using dowels to attach it to the top two small shelves (which are themselves doweled to the side panel). This works OK, but means these shelves can’t be adjusted. 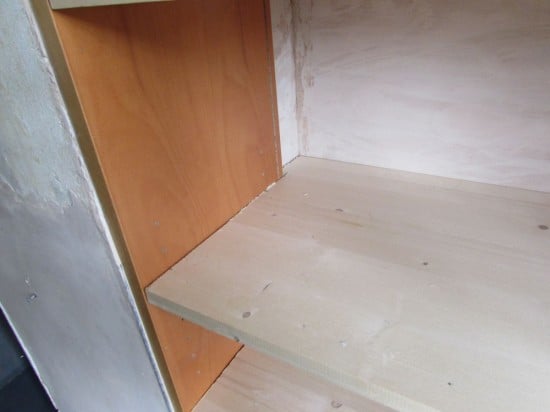 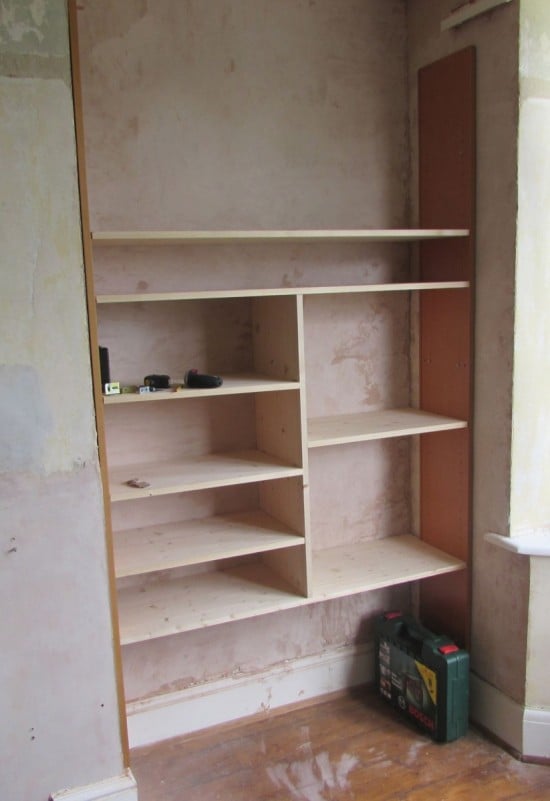 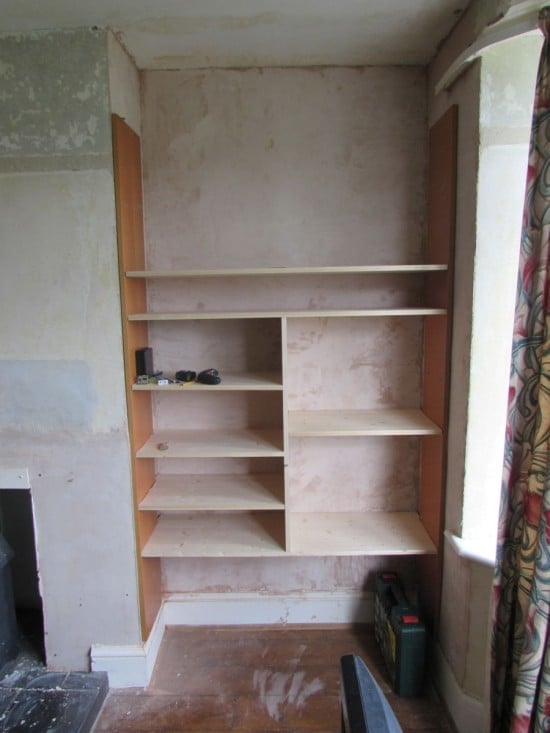 I drilled extra stud holes in the side panels and vertical board so the short shelves on the right and the bottom left could be adjusted – with careful measurement getting the holes aligned proved easier than expected.

As the bottom shelf could now find itself supporting a considerable amount of weight (the short shelves are partially resting on it) I gave it an extra stud to rest on either side.

To finish I placed a board across the top and then created a surround using a dido rail. The surround has mitred corners and is screwed in place using brackets attached to the inside of the side panels.

Taking apart the unit is very easy, which was handy for painting (I found primer, undercoat and gloss were more than capable of hiding the beech veneer). Also, the shelves are all stable, despite the side panels not reaching the back of the alcove. 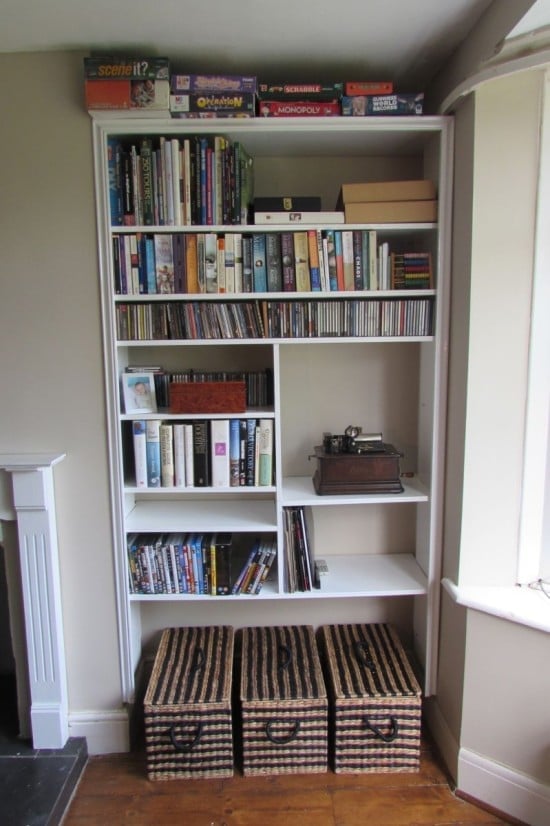 After the triumph of creating my own custom alcove unit I went on to build a shoe rack with the leftover Billy shelves. I cut these to size using a jigsaw (which didn’t chip the veneer) and used wood screws to put them all together. I found it is vital to drill before putting in the screws to avoid splitting. Wood filler was used to neaten the un-veneered ends of the boards before painting.

To summarise, I’m very happy I undertook this project, as I now have an alcove unit that looks fantastic and makes best use of an awkward space. And then there’s the satisfaction of completely repurposing a Billy bookcase rather than simply using it for landfill! 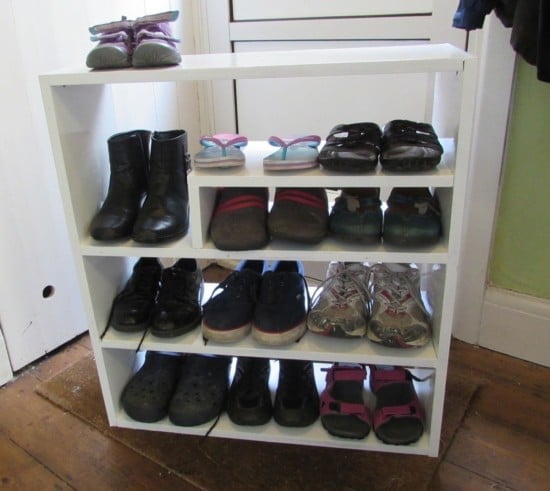