The eX(pedit)-BOX – An arcade coffee table 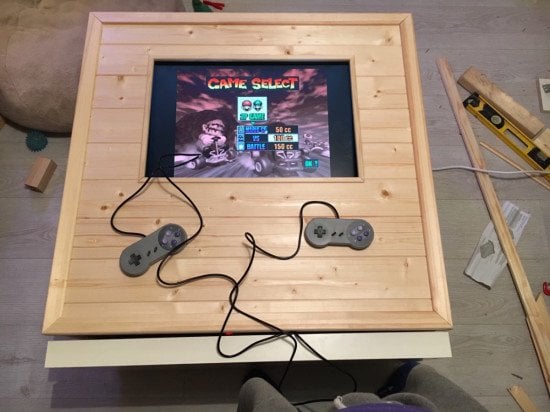 In February of 2016 my girlfriend and I decided to redecorate our living room, changing it from the dingy student living room it was into a posh place to chill fitting for our new roles as qualified doctors. In fairness she was in charge of pretty much everything, the colour scheme, the floor, the ornaments in keeping with a “hygge” atmosphere. However one thing we struggled with was finding a coffee table we both liked. I needed storage to hide away our junk and she needed it to look good.

While on a night shift I came across a really cool looking arcade table, unfortunately it cost upwards of £3000 which was a bit out of our price range. But, I really liked the idea of being able to play some old school classics while she was able to enjoy “bake off” on the TV.

I came across this great IKEA hack – The Lack Arcade Coffee Table – and thought hey I could do something like that.

Having previously been in a house for 4 students we had quite a lot of Expedit 2×2 shelving units around (they are much cheaper than any chest of drawers we could find). Popping one on its side I thought that’s pretty perfect coffee table size for our room and the idea was a go. 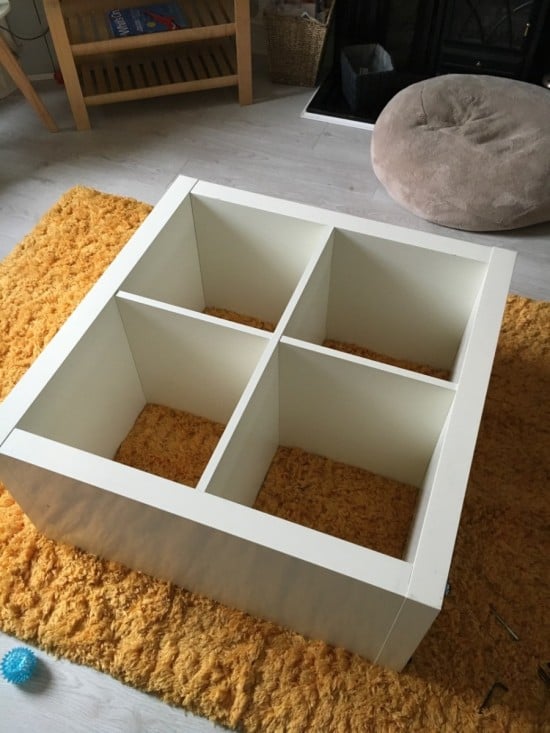 Before rushing into anything I knocked up a quick 3D image of how I thought it should look. 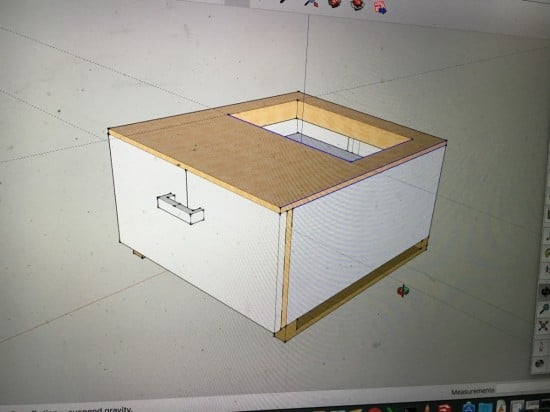 Although my girlfriend was pretty sure it would likely turn out a little bit more like this. 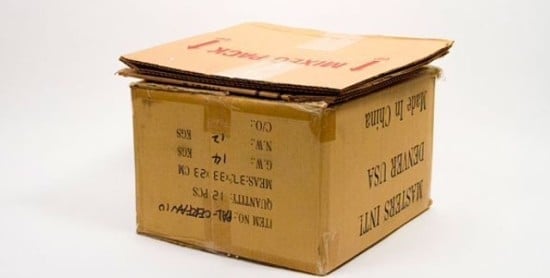 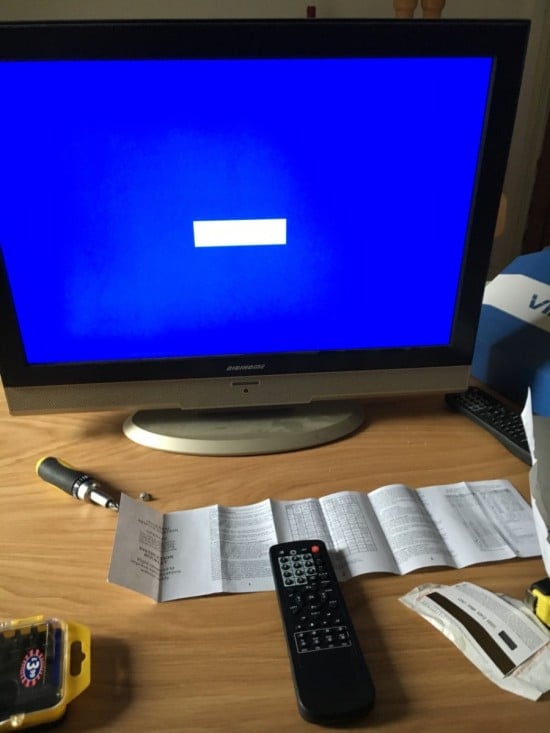 Phew! It does (and remarkably so does the £1 remote from poundland) 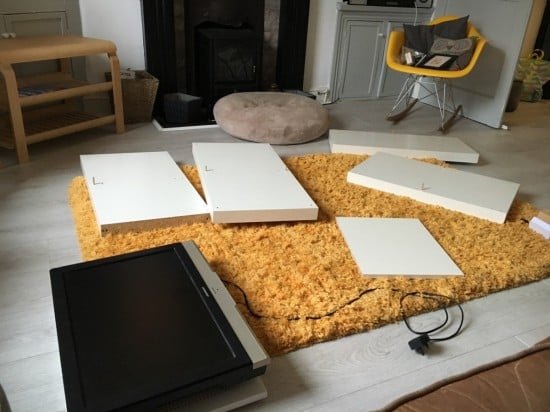 I removed the middle supports of the EXPEDIT unit and cut out an area which would allow the TV to sit on nicely but still be able to be placed within frame of the unit. I used an ALGOT metal shelf (which I happened to have lying around) that was a perfect fit to lie my monitor on and had the added advantages of “venting holes” 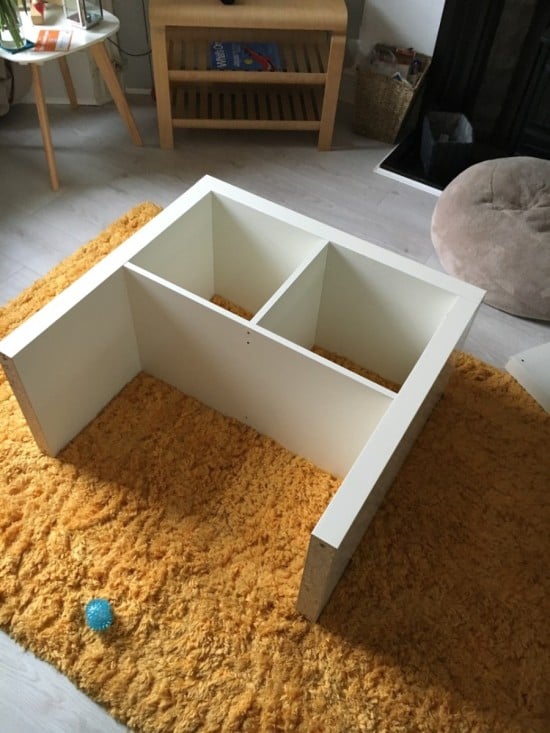 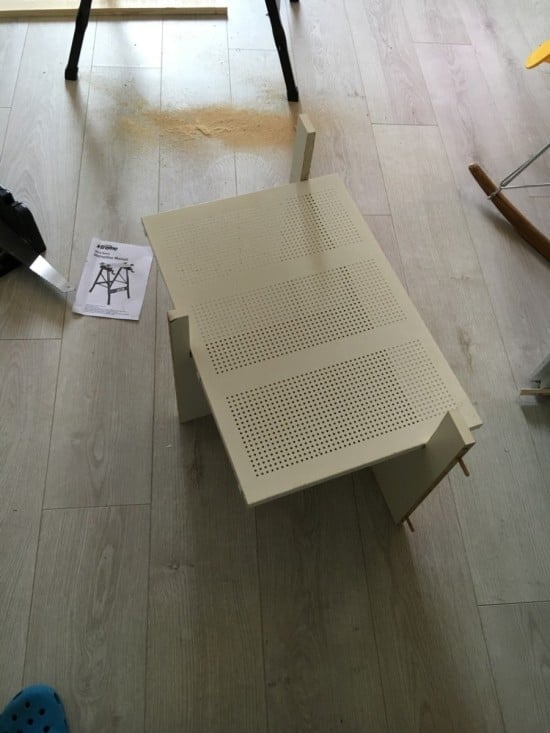 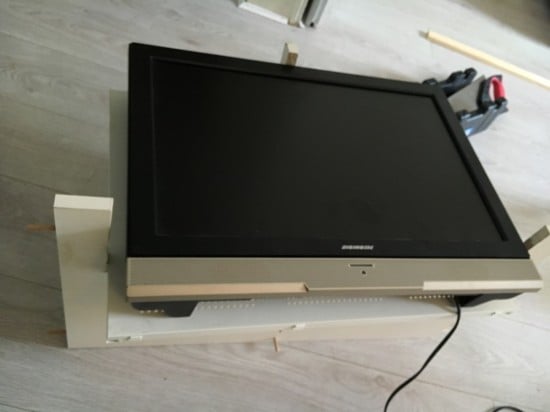 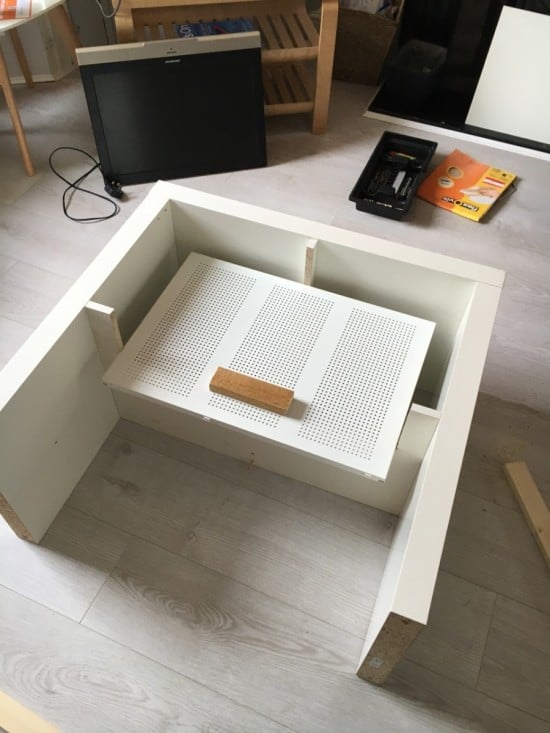 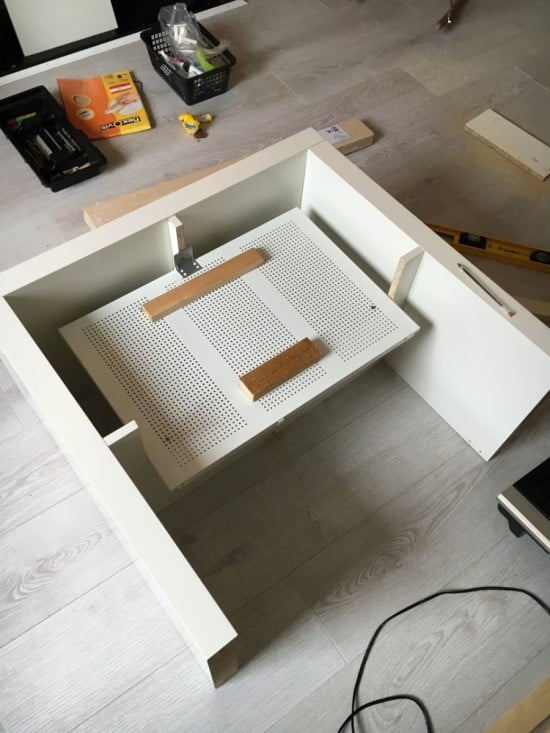 The shelf was easily held in place by using little screws through the handy “vent holes”. I used wood to keep the TV in place and also place it at a better viewing angle. 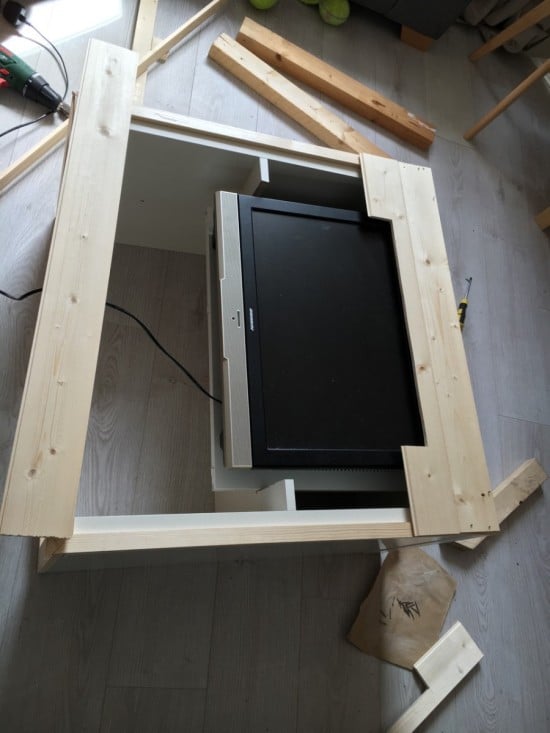 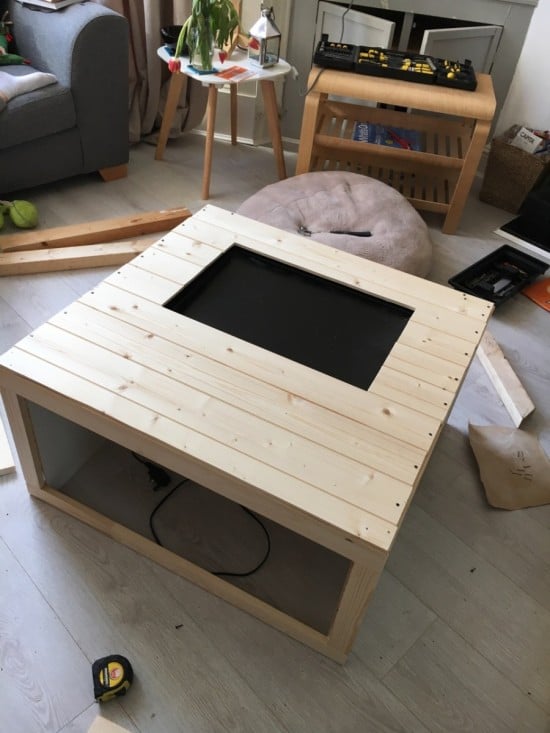 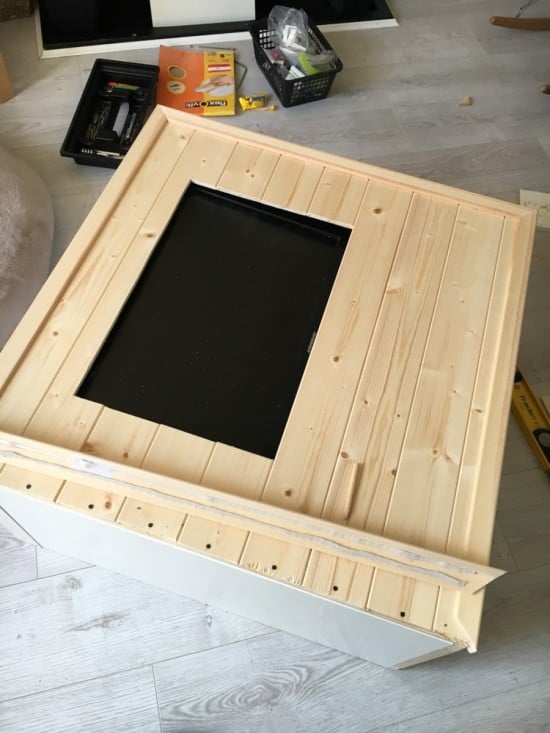 I decided that it would be useful to be able to easily access the TV so I thought it would be best to make the table top removable. I used 2x4cm wood to make a frame, then used standard wall cladding to make the top on top of the frame which was easy to work with and allowed me to easily cut out a viewing hole

I finished it off with some corner edging that had a bit of an overhang to make it look nice and so that it would fit snug on the table and not slide around.

As you can see it just easily lifts off. 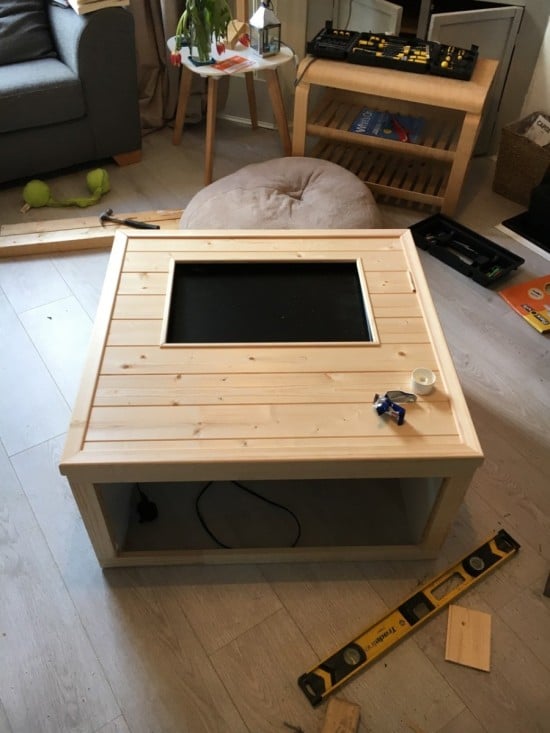 As you can see it’s taking shape nicely now.

I used the remaining part of the EXPEDIT frame as a drawer front and made a simple drawer unit to keep the controllers and other useful bits and bobs out of sight. 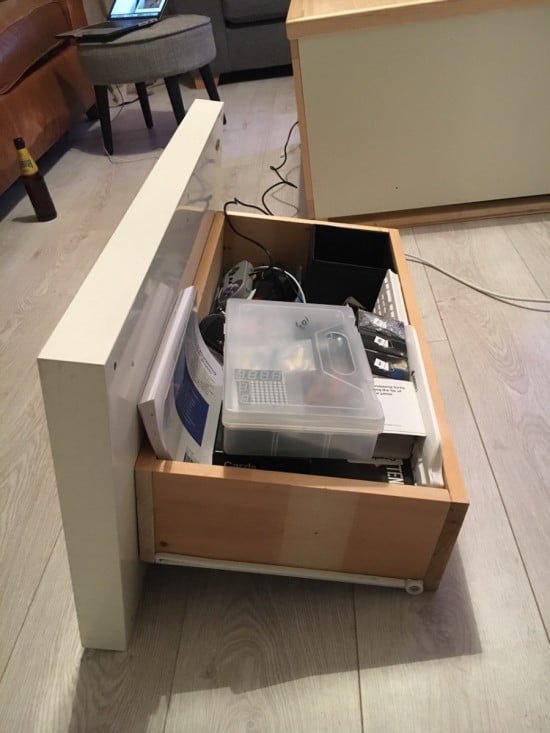 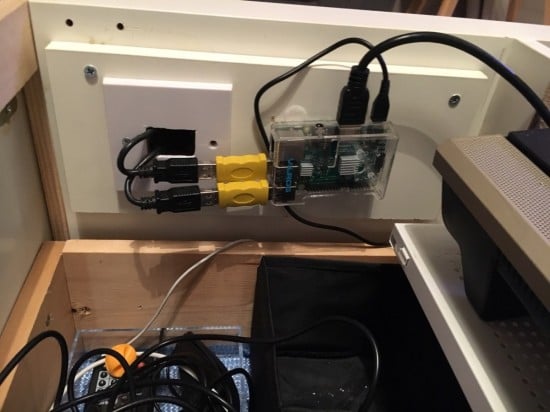 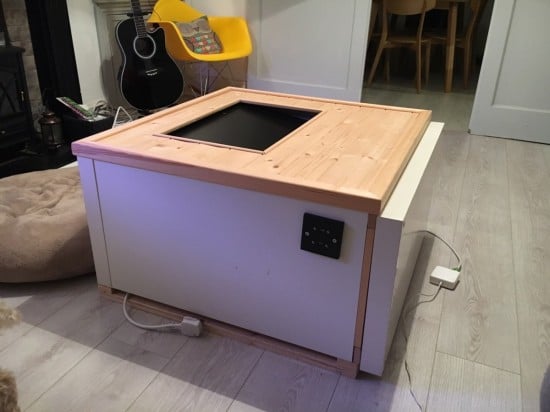 Using the magic that is the Raspberry Pi my £20 EXPEDIT unit is now a fully functioning arcade table capable of playing pretty much any game from my childhood. Which means pretty much one thing and one thing only… MARIO KART!!!