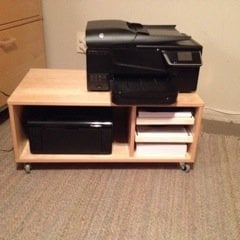 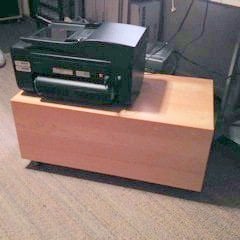 I have been a buyer and a fan of IKEA products since they opened their first American store in Plymouth Meeting, PA back in 1984. I have owned Boj, Pax, System 210, Ivar,Tore, and Effectiv over the years with some items replacing others.

I originally purchased Boj dressers from my son’s bedroom that I’d been using for my office work but also sewing and crafting supply storage. They held EVERYTHING!!. But it was time to upgrade so I donated the Boj dressers and moved on to Effectiv. I have four Effectiv cabinets and a wall shelf unit. They have locking wheels, work very well for my storage needs and can be ganged together when I need a large work surface. But I found I needed additional pieces.

Sadly, I only learned that Effectiv was discontinued when I noticed four doors [minus their handles and hinges] in the As Is department at my local store. Not to be detered, I bought them to make a rolling printer cart. I couldn’t use the wall shelf as it was too shallow to fit the printer inside and too high if I put the printer on top to roll under the desk when not in use. I had the doors trimmed to remove the hinge holes, reserving the finished edge from the sacrificed material. One of the doors was cut into thirds. 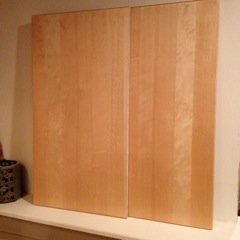 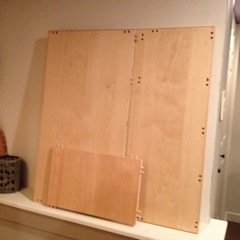 The cut edges of these pieces would be concealed top and bottom by two of the doors and the cut edges on these would be concealed by the back making for a finished printer. The salvaged trip was glued to the cut edge of the back panel but since its facing down, won’t really be seen. The remaining piece from the door cut into thirds forms a vertical divider on which to install shelves to hold paper stocks. The remaining opening is for storage of a smaller printer and other supplies. 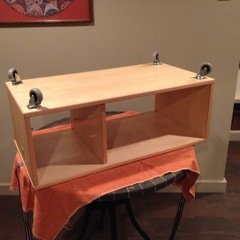 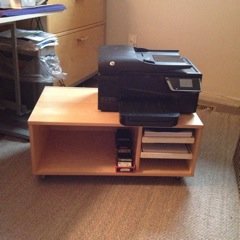 The whole cabinet is fitted together without a single screw or visible means of joinery. This is achieved by the use of a dowel jig with corresponding sized drill bits with collars to insure correct depth when seating the dowels. The dowels are placed in groups of twos with placement a critical issue. I was a bit over zealous in how many dowels I would use per side and ended up not using several of the holes drilled for various reasons…the more likely cause – the corresponding holes did not line up exactly.

No matter. When dry fitting the cart, I found that I couldn’t insert my fingernail in any of the joints and the cart was true and square. A final gluing and strapping together produced a nice finished cabinet A couple of IKEA wheels and its ready to be pressed into service. Not bad for a first wood working project. 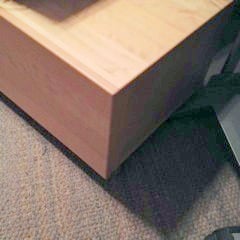 I must confess, I bought these doors maybe three or four years ago, had them trimmed and cut about two years ago and there they sat until March 2015. Knew I needed to get a quality dowel jig

and found one in the Eagle Jig. I now feel confident to tackle the vanity I have planned! It will not be an IKEA Hacker item since it won’t have anything from IKEA in its construction.