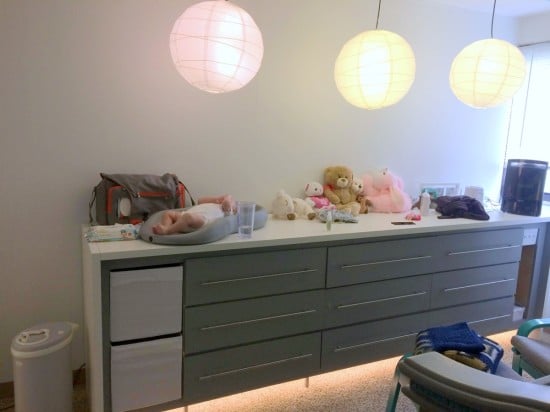 When we found out we were having our first child, we wanted to have a great looking nursery, while also making sure we do not break the bank so we can splurge on other items.

At the time, we had really beat up MALM dressers, a birch 2×4 EXPEDIT shelving unit, and a birch 2×4 KALLAX shelving unit. I wanted to find a way to repurpose this furniture and make it look new again, as it looked terrible.

When we were looking at Pinterest for nursery inspiration, we saw a modern gray two-toned dresser with a built-in bookshelf and waterfall top. I knew we had to find some way to imitate that.

I immediately ripped out the drawer hardware (the tracks) and the drawers themselves, so that I could use them again. I was able to get 9 drawers in total that could be reused.

I then laid both the KALLAX and EXPEDIT units landscape, and took off one exterior piece so I could bridge them together. I bridged the units together using .5″ MDF board. This allowed me to raise the bottom of the kallax unit such that the interior of both units aligned perfectly. I then installed 8 CAPITA legs, and placed additional .5″ MDF on the top of the KALLAX unit so that the top of the KALLAX and EXPEDIT units were flush.

Next, I had to figure out the spacing inside the shelving units. I wanted to be able to have a grid of 3×3 drawers, with two typical kallax-style storage spots on the left, and a slimmer shelving area on the right to house a lightswitch fixture and books, or even diapers.

I figured out the spacing (I’m sorry, I initially made this all several months ago so I do not remember the measurements off the top of my head) and installed the drawer tracks. I then began to take apart the 9 drawers that I salvaged, so I could replace the drawer fronts with .5″ MDF. I painted the new fronts a light gray color that we also striped the walls with, reconstructed the drawers, installed LANSA handles, and fit the drawers into the shelving units.

At this point, the project looked like a mess. I decided I would get pine board to frame out the front of the shelving units so you could not see the bridge and gaps, and painted it all gray.

After, I had to make an IKEA run. I purchased (as will be discussed later) gray POANG chair pads, 3 REGOLIT paper shades, and 5 white LINNMON tabletops. This ran about $140 after tax, with nearly $100 being spent on the ISUNDA GRAY pads.

Once this was complete, I added backing to the exposed shelving areas on the left and right of the unit. Dresser: complete.

Next up, the poang chair. 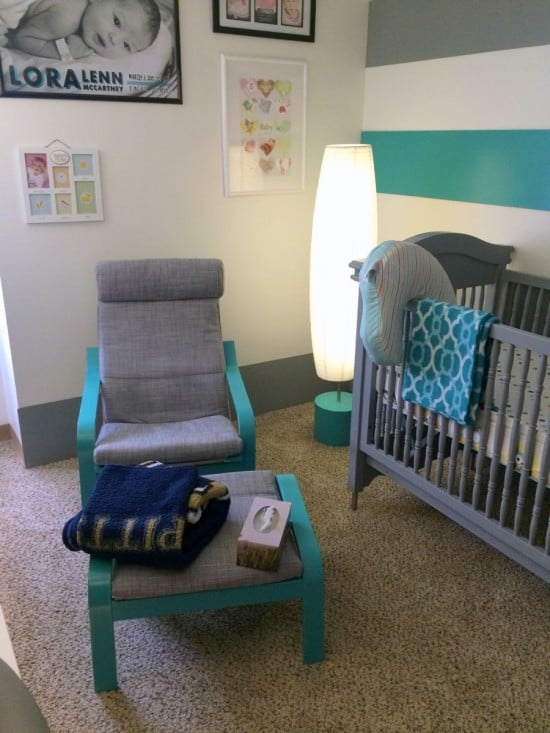 The last IKEA-related hack was to install the REGOLIT lighting. I cut a piece of PVC pipe to the same length as the drawer/shelving unit, painted it laguna blue, and drilled holes for the wiring to string through to the REGOLIT units. 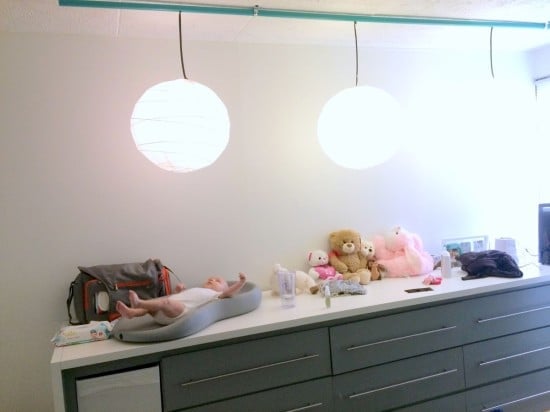 I purchased and had cut panel boards a foot high to make stripes on the walls (we rent and cannot paint directly on the walls). We also were given a crib, which I painted and installed CAPITA legs on.

I cut and split the lighting into three separately powered systems: lighting under the shelving/drawer unit, the REGOLIT pendants, and the floor lamp. From the master power source, I added the photosensitive resistor to ensure that the lights would not turn on during the day if the room was already well-lit. I then split the master power source into two: one to power the under lights, another for the floor lamp and pendants. I attached a PIR sensor to the under lights and installed the PIR sensor to the bottom of the drawer unit. This way, during the night, the lights come on (rigged to a dim white light) if we need to check on the baby or change her. Next, I installed a timer to the floor lamp and pendants, so that way the lights would shut off automatically if we left the room for a period of time or did not make a change via the controller.

I then further split the power into three individual light switches, so that way each portion could be turned on/off independent of one another, but still slaved to one controller.

I then split the controller to all three segments and ran the wiring through the PVC pipe for the pendants, and behind a wall stripe to the floor lamp.

For the lights themselves, I wrapped the strip around each metal wire REGOLIT frame, and around the metal base on the floor lamp. I also ran an IR sensor for the controller through the PVC piping so that way the IR remote controller for the lights can be used throughout the entire room, with the IR sensor accessible from every point.

We purchased some frames for on the walls, white bins, etc. But spent around $300 for the entire room, repurposed what we already had, AND barely use anything to power the entire room!