I got all of my IKEA stuff when BESTÅ was 15% off 🙂 Prices shown in the pic are regular prices in Canadian dollars. 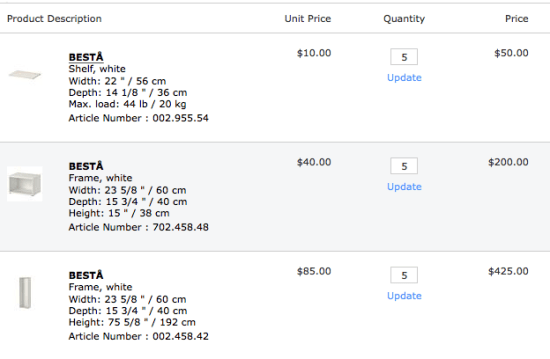 Backstory: Moved into a new house. Had a shed type addition on the back that wasn’t really used by the previous owners. Had been finished maybe 20 years ago. Poorly insulated, no vapour barrier and and only a small electric baseboard heater. Attached to this addition was about 3’ more space (not finished) that served as a shed.

So we (ie. my contractor) demoed the inside of the mudroom – including the subfloor – and then insulated it and put it all back together – with forced air and infloor electric heat, new electrical, new doors, dog shower, a recycling door and a cat door. The contractor did all of that work. I just did the lockers and a few other things. My only power tool is a drill and so all my cutting was done the old-fashioned way. My skill level is medium-low. With this hack, I felt like I had to MacGyver almost every single thing. 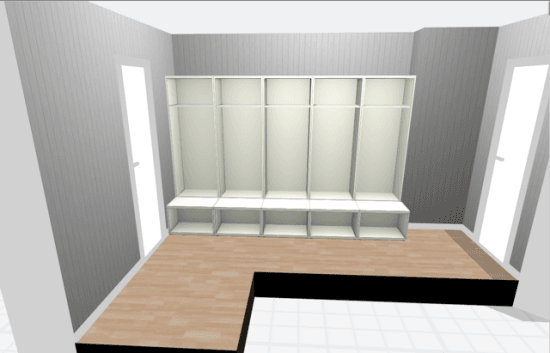 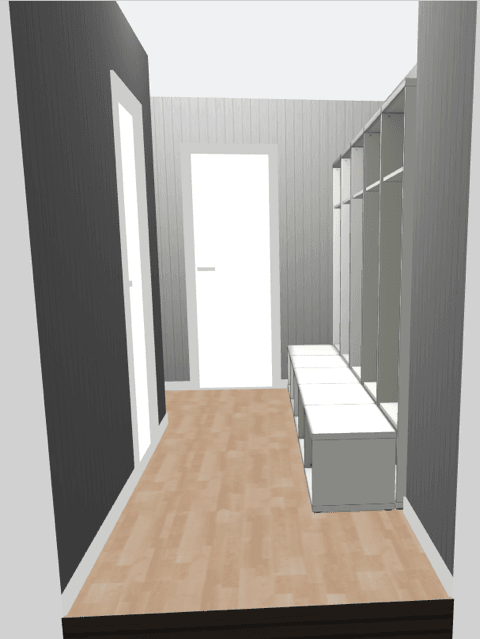 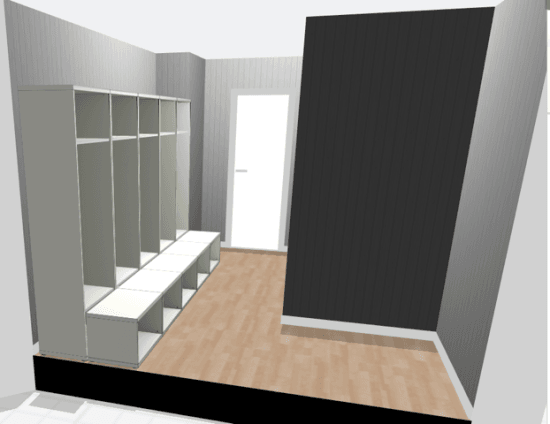 And now for the hack…

1. I had my contractor frame a bumpout into the unfinished shed area for the lockers. I imagine that most people attempting this hack wouldn’t be doing this step. Rather, the lockers would just be built against an existing wall. And, if I had space above, I would’ve definitely built up and maybe included a cabinet with a door.

2. I assembled the 5 tall frames without the bottoms (note, I actually used the bottoms, which have large screw holes for the levelling feet, as the tops, because in my design, the tops are hidden). CAUTION: Very flimsy and difficult to move around without the bottoms. Just before putting them into place for the final time, I re-assembled them using No More Nails (glue) on the tops of the sides and PL Premium (construction adhesive) inside the holes where the connectors go. If you do this, MAKE SURE YOUR GLUES ARE ALL WHITE! PL Premium is grey, so I made a bit of mess.

3. I had to cut a small strip off of each backer board because it’s supposed to extend into the slot on the bottom of the frame, which I didn’t use.

4. I put what is supposed to be the bottom of the backer board at the top of the frame because there are holes at the top for (I think) securing the frame to the wall. I didn’t need to use this hardware because the frames were recessed into a space sized specifically for them, so they can’t tip over. And I didn’t want to see these holes. I filled them with caulking later anyway, but they’re still less visible at the bottom of the frames.

5. One thing about the BESTÅ frames that I didn’t realize was that there is a space – about 1/2” behind the backer board. So off the lumber yard for me. I bought 3 sheets of 1/2” plywood and had them cut 5 rectangles 22.125” x 73.25” (height of the side panel). I screwed each of these into the studs (after checking that the frame would slide in and fit properly around the plywood). I didn’t attach the frame to the plywood. I didn’t want to put screws through the backer board or use the hardware supplied to prevent the frames from tipping.

6. Before attaching the plywood, I had to use shims – both behind the plywood and the cabinet sides (at the back) in order to make the fronts of the frames flush with the drywall on the side and top edges of the bumpout. This was a huge pain, because nothing in the mudroom was square, but I needed it flush to the front for the trim to look good.

7. I originally wanted to drill holes and insert the connectors into the floor for each of the frames. But my contractor talked me out of it since we were using porcelain tile which he says is very difficult to drill through.

9. I had a bit of space at the top of the bumpout and I filled this with some wood. I still had to use shims at the top once I had all of the cabinets in place. Of course I dry fit everything in place before starting to attach anything to anything.

10. The last frame had to be convinced to go in the space that was left for it, but we didn’t have any casualties. This frame was also screwed into the studs at the side of the bumpout.

11. Once I had all the tall frames in place, I had the contractor come back on do the trim. I could’ve done this myself, but I wanted it to look good 🙂

12. And then I got started on the bench. Again I assembled all 5 of the shorter frames without the bottoms. And again I used some of the bottom pieces as tops, since I planned to put another piece of MDF across the tops.

13. I wanted to be able to put taller boots under the benches so I decided to use 2x4s and 1x4s to make the benches taller. The 2x4s happened to be the exact same width as 2 side panels. And the 1×4 was the exact same width as 1 side panel. I drilled holes in the 1x4s and 2x4s and screwed in the connecters that come with the frames. These holes have to be in exactly the right positions. I tried making a paper template using one of the unused tops, but I failed. I ended up using an off cut from one of the tops and actually drilling right through the holes in it (my husband’s idea). This way they were not only in the correct positions, but they were also drilled in perfectly vertically. I primed and painted the 1x4s and 2x4s before I built the bench. 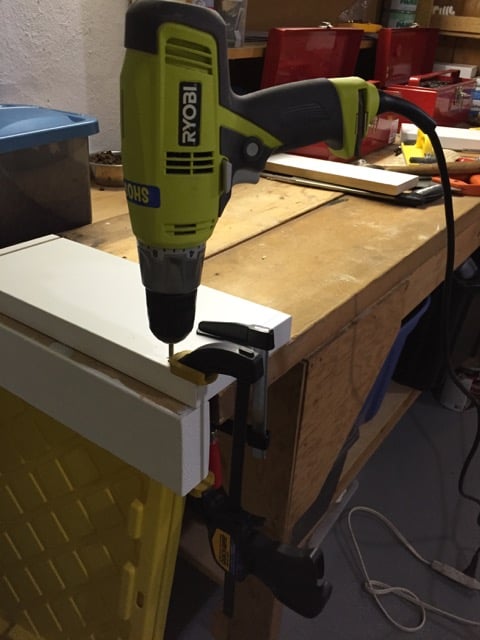 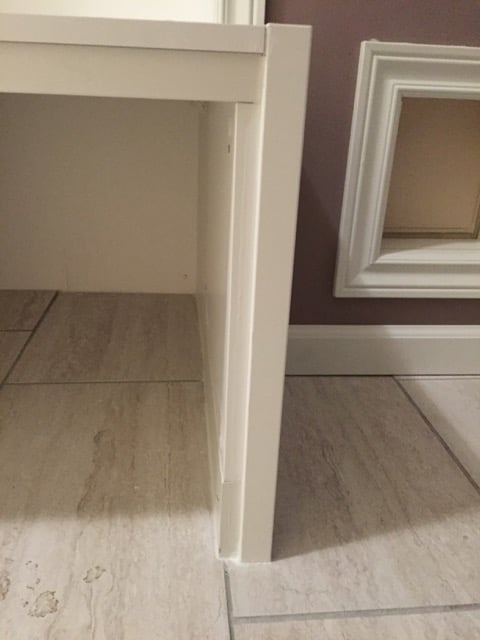 14. I had a bit of space between the wall and the start of the bench. I decided to cut down two of the extra tops/bottoms and attach them to the wall and then attach the side of the first short frame to those pieces. This didn’t go as smoothly as I thought it should because the side wall was not square. I ended up cutting out the drywall from the sidewall, adding in a bit of plywood and then using Great Stuff (expanding foam) to fill the wedge-shaped space that was left. Not exactly fine-carpentry, but the finished product looks surprisingly good.

15. When I was ready to attach the bench frames together, I put some No More Nails in each of the connector holes and then reattached them. I should’ve also put glue on the tops and bottoms of the the side pieces of each frame, but I didn’t.

16. I had to move the already connected bench frames a few times. This required the help of several family members as it was 10’ long and not all that sturdy on its own. Before putting the bench in its final resting place, I put PL Premium on the fronts of the tall frames where the back of the bench frames would touch them.

17. Ok, I’ve started to get out of order a little bit. Before I could attach the bench frames, I needed to install shelves in the tall frames that would sit exactly level with the bench top. Originally I had hoped to use actual BESTÅ shelves, but I didn’t realize that the front of the shelves aren’t flush with the front of the frames. And so, to use the shelves, I’d have to drill new holes closer to the front and fill in the gap that would now be at the back with some sort of MDF trim or something. Since this sounded like too much work to spend $10/shelf and still wouldn’t be all that strong, I decided to use some of the extra tops and cut them down to make shelves. I bought some 1×2 white trim and used that to support the tops. This whole thing took me ages to accomplish. It was VERY difficult to screw this trim to the sides of the frames and get them level and in the right place. Plus I had to cut 5 tops by hand and even then they didn’t all fit exactly right.

18. Next I attached 2 pieces of 16” white melamine shelving (found this at Lowes). I wish it came in 10’+ lengths, but the longest is 8’, so I had to have a seam on my bench top. I used a little PL Premium in the levelling screw holes (on the top of the short frames that were actually bottom pieces) and I also put a few screws in from the bottom of the top of the frames. The shelving isn’t finished on the ends, so I ended the shelf flush with the end of the bench, with the plan to cover the unfinished edge with the extra panel I was attaching for more support.

19. Once the shelves were done and the bench was attached in place, I still had to beef up the other end of the bench. So I cut yet another extra top piece and attached it to the open side of the bench. I cut it tall enough so that it would be flush with the melamine bench top. Mostly flush – the extra support piece moved up a tiny bit when I was screwing the side of the frame to it.

20. We’re on the home stretch now. I installed 5 BESTÅ shelves about 6” from the top of the tall frames. I used some small baskets from Walmart here (Sterilite). The ones from Ikea are too expensive.

21. It was difficult to find nice hooks for a decent price. I ended up finding some silver ones at Home Hardware (sorry, it’s in Canada). 3 hooks for $12+tax. I just attached them with the screws they came with. I was thinking I should’ve used longer screws and wood glue in the screw holes, but I didn’t. We’ll see how they hold up. 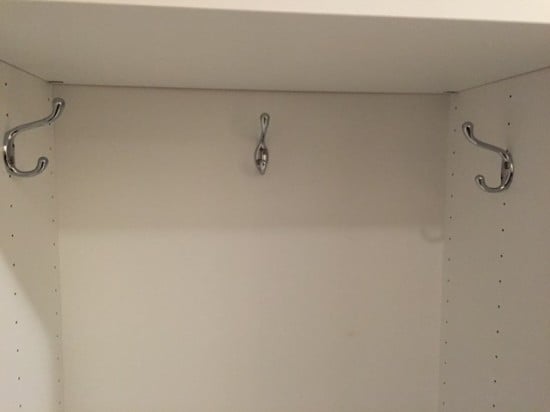 22. I did a LOT of caulking. Mostly anywhere wood/MDF meets tile. Of course there’ll be wet boots and mud, so I wanted to protect the wood/MDF as much as possible.

23. I ordered the letters to label the lockers from an Etsy shop called My Sweet Dreams. Font: whimsical, Size: 10 inches. I’m sure that there are other places that you can get letters like this, but I ordered from this particular person because she’s in Canada. It’s always a pain for us to have stuff shipped from the US as we sometimes end up having to pay customs and duty charges.

24. Oh, and for the trim paint for the whole mudroom, I took a BESTÅ shelf with me to the Home Depot and had them do a colour match. I used semi-gloss. 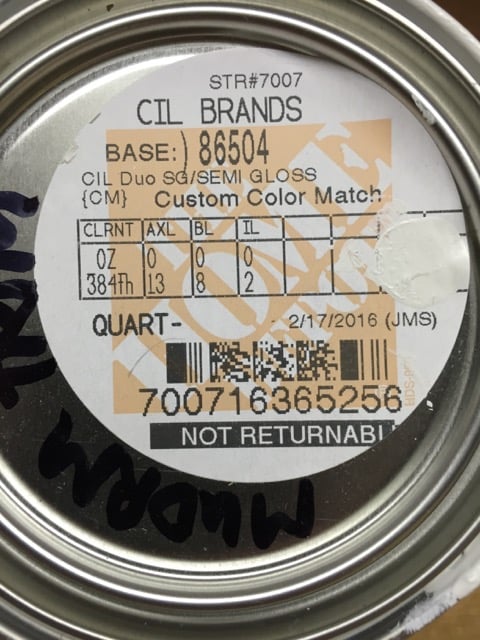 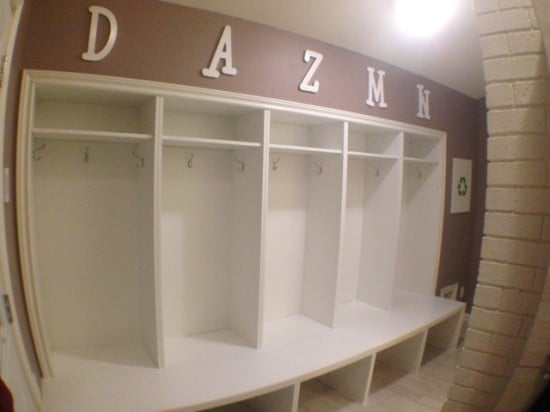 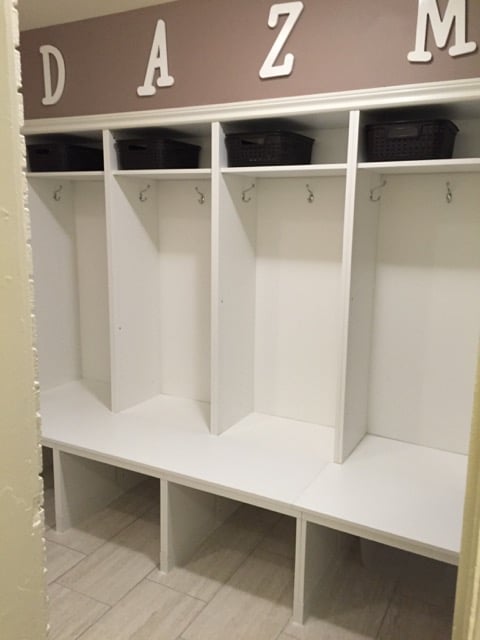 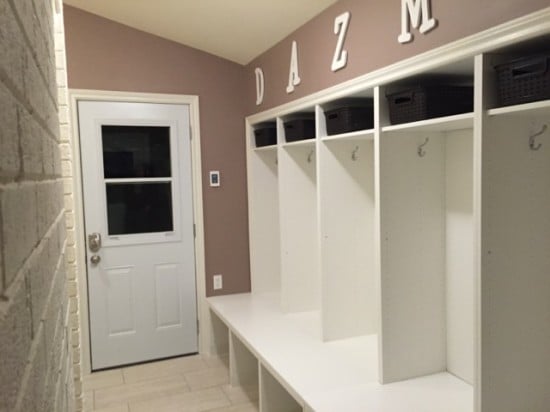 I chose BESTÅ because I wanted wide lockers – almost 2’. One of my girls, for example, has 3 backpacks – school, soccer, basketball – and a small dance bag. I considered using the 8” depth of short BESTÅ frames for the bench, but I chose the 15” depth because I wanted lots of room underneath for the many, many pairs of shoes/boots my girls have. 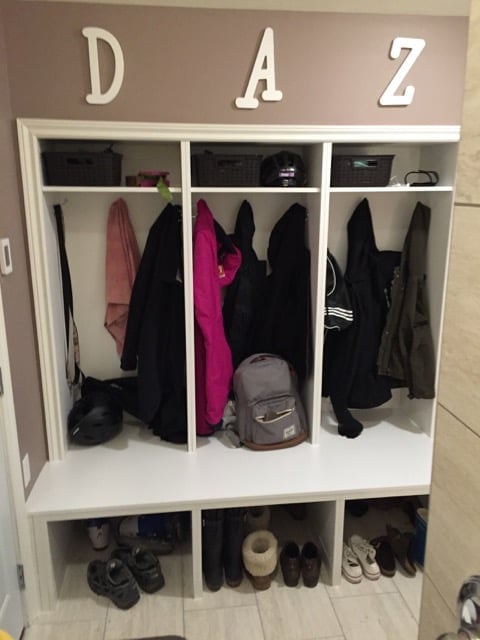 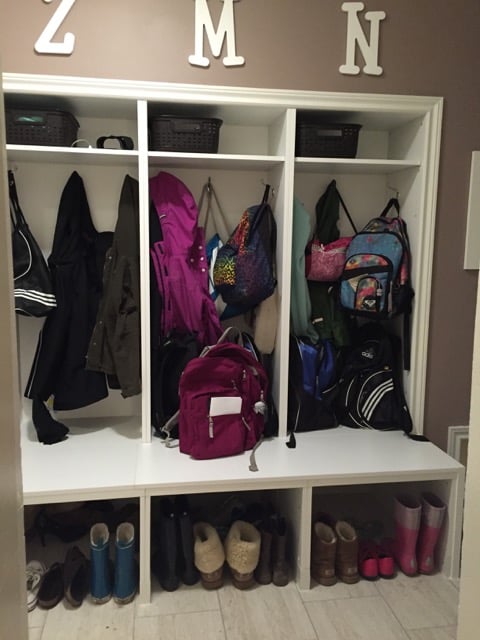 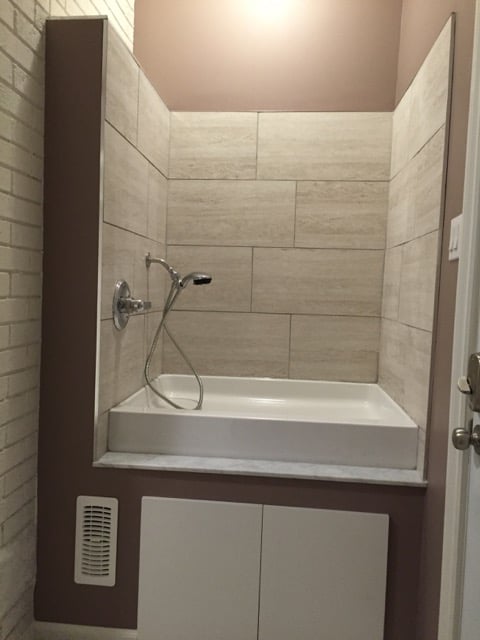 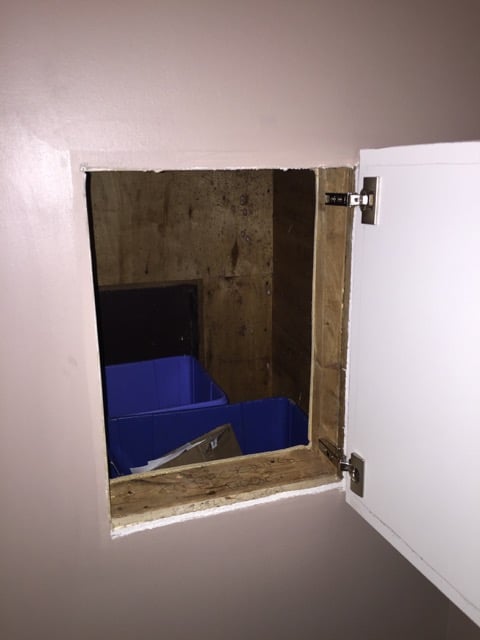 Other side of recycling door.