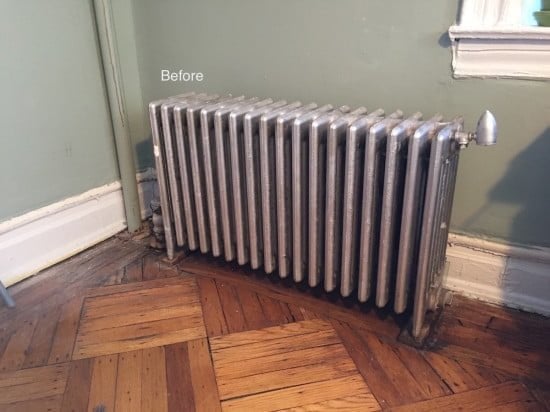 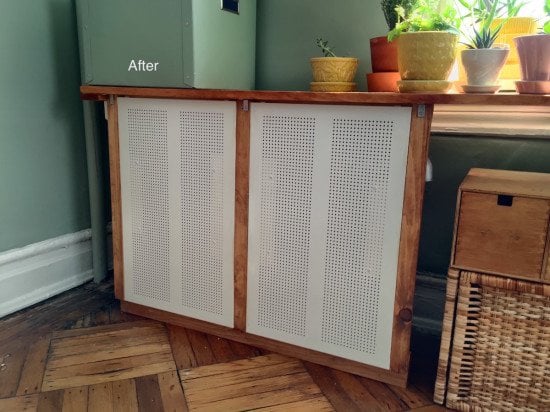 I recently moved into a cozy apartment in Brooklyn, which like most pre-war buildings in the city, has its share of heavy, antiquated radiators that were covered in aluminum paint. There was an especially unattractive one in the dining room, stretching from the corner of the room right up to the edge of the window. I found scores of charming radiator covers on both Pinterest and Ikea Hackers, but the problem of the window and the size of the radiator made it really difficult to adapt any of the solutions I’d seen.

Storage in an apartment can be a challenge, and after putting up a series of IKEA ALGOT shelving above the radiator, I decided to remove some of them to use for a wall system in the bedroom, and had a couple of the larger ALGOT shelves left over. They were leaning up against the wall, and as I wondered what to do with them, they suddenly reminded me of old-fashioned radiator covers with the holes for ventilation. The wheels started turning, and there it was – use the leftover shelves to cover the radiator! The ALGOT system is wonderful, and the shelves attach very nicely to the system brackets, but how to attach them to each other was another problem completely. This was done without any plans, so I basically put it together as I went along. 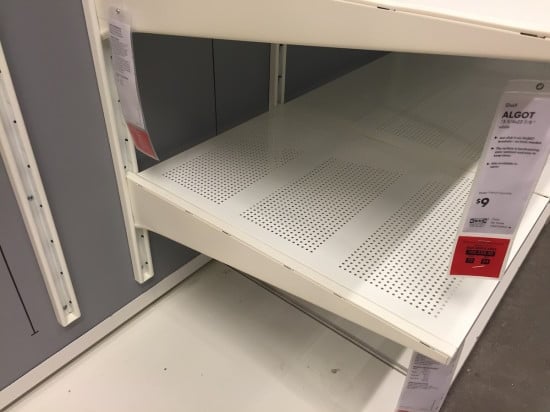 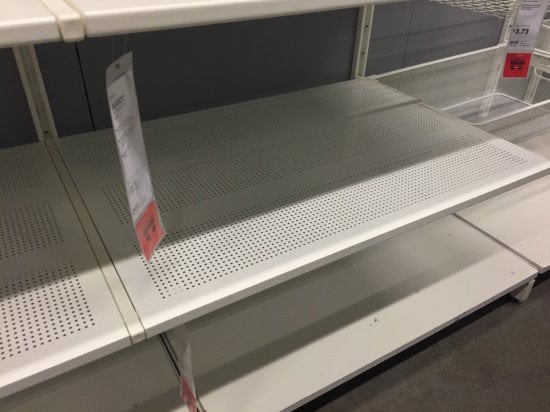 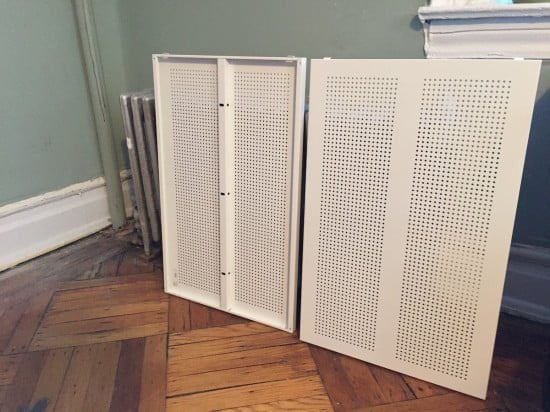 I had spare pieces of 1×2 wood and bought some wood joiners, which worked to attach the shelves to each without drilling into them. Using more scraps and picking up a few longer pieces of wood, I made a frame for the two shelves which were screwed together on the corners and in the center. 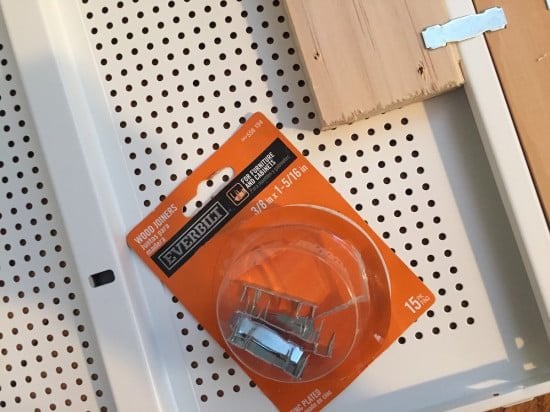 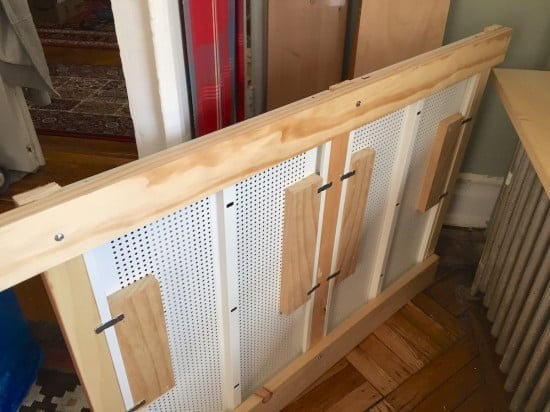 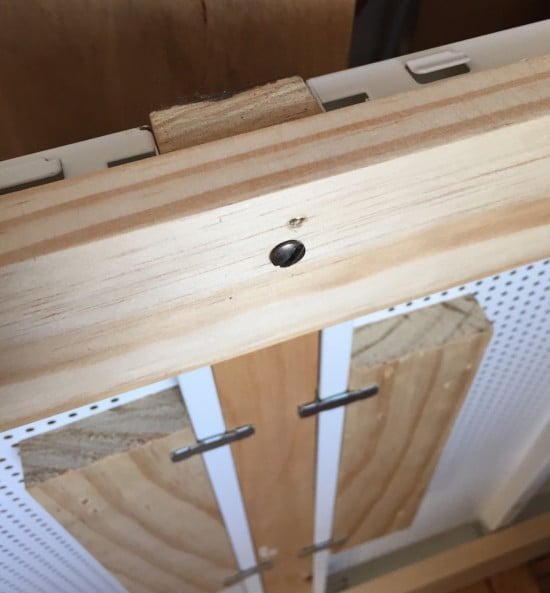 Just for extra security, I put some screws into the wood pieces from the front, and painted them white to match. 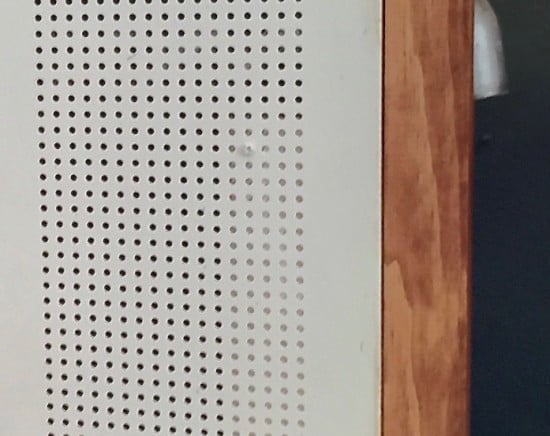 The frame wasn’t going to be able to support a lot of weight, so I put up an Ikea EKBY LERBERG 11” shelf bracket, and bought a piece of 12” x 1” finished pine, long enough to extend the length of the radiator and up to the end of the window, where two L-shaped brackets connect to a vertical piece of the shelf. The perforated cover is about an inch or two away from the radiator and the top shelf extends over it by an inch, so it was easy to fasten it to the frame using two more L-shaped brackets. It’s enough support to keep the shelf sturdy and the perforated cover securely in place. A light coat of stain and some oil gives a nice finish to the wood. 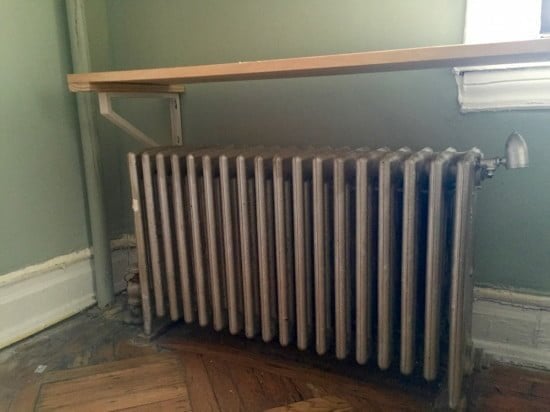 The cover is open on either end and perforations in the metal shelves, so there’s no problem with allowing the heat to escape into the room. A little IKEA CD filing unit with two drawers hold small items, with an IKEA basket to hold large bags of potting soil, and an old wood cabinet fits nicely below the shelf to keep plant food and sprays out of sight. So what was a shabby corner of the room that I tried to ignore has become a lovely plant center. 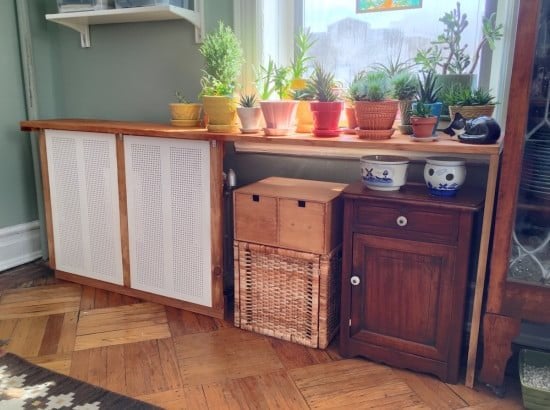 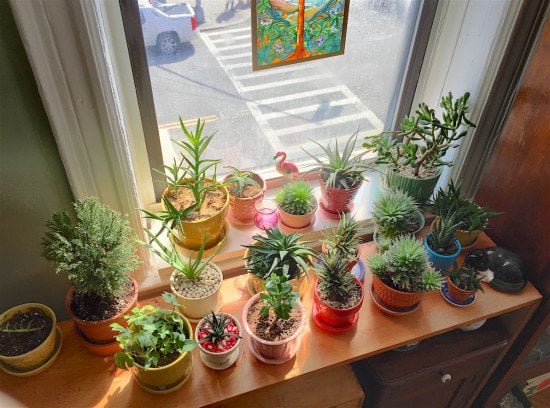