LACK table assembly in a jiffy with this clever tool

IKEA LACK table assembly made easy with a DIY tool. Without it, I wouldn’t be able to assemble 20 IKEA LACK side tables (that’s 80 legs!) in no time.

Recently I had to assemble 20 IKEA LACK side tables to build a storage shelf from those. After assembling two of those tables, I realized that I am going to cry by the time I reach the fourth if I don’t use a tool of any kind. How was I going to install those 80 legs?

So, I asked for ideas from the Internet and my friend came up with this idea to use four small angle irons to create a perfectly shaped leg-driver. 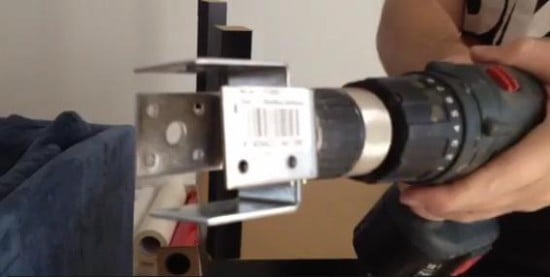 Related: 16 ways to use the IKEA LACK side table all around the house

I took one leg with me and went to a local hardware store where I actually found the perfect corner irons for the job. The holes in the irons were perfectly in the same position as the center hole of the leg. The tool itself was assembled with one 5/40 bolt from inside, through all four of those irons and tightened with a nut. And how does it work? Perfectly… I attach a video of the IKEA LACK table assembly of the first table.

Later, I noticed that I don’t even have to preinstall legs – I just fitted them into the tool and “screwed” them in.

Other LACK side table hacks you may be like