How to store and organize 9000+ LEGO bricks

Hi. My name is Uncle David.

I am the proud uncle to my 8 year old nephew, Kai. One of the most rewarding aspects of being an uncle is helping my nieces and nephews solve problems.

Last year, Kai had a big problem. Kai only had a few hundred LEGOs and he wanted a lot more LEGOs for Christmas.

I knew how busy Santa would be during the holidays so I left nothing to chance. It was up to me to save Christmas for Kai.

On Christmas morning Kai got a huge cardboard box from me and guess what was inside? Forty pounds, or about 9,000 LEGOs!

Yes, Kai was a very happy nephew last Christmas but what I didn’t expect was the following problem. As the days and weeks wore on all those LEGOs went untouched in that huge cardboard box.

My nephew was overwhelmed and he let his LEGOs sit in his bedroom until I could fly out this holiday season to solve another problem. I knew what I had to do for my nephew.

I had to build Kai a new LEGO organizer. 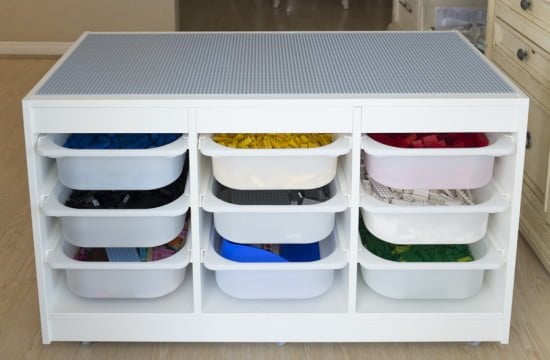 I did my homework and I found a beautiful and simple solution using IKEA’s Trofast frame. Perhaps it’s difficult to believe but I have never assembled a piece of IKEA furniture in my life.

Kai’s LEGO organizer would be my first but, before I started, I read many different articles and gathered many tips.

In this article I want to share with you ​detailed​ instructions on how to build a LEGO organizer and to inspire parents, aunts and uncles, and other family members to build their own for their loved ones. It is easier than it looks. 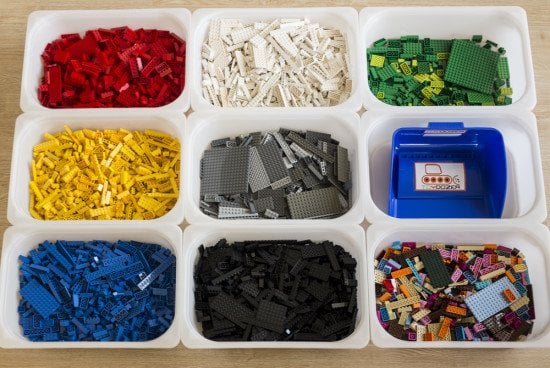 Deciding what works for your LEGO organizer

First, have a discussion with your little one and ask them how they would like their LEGOs organized. We decided to​ ​organize Kai’s LEGOs by color and focus on classic LEGO bricks instead of the more involved custom sets.

After, it was up to me to sort the LEGOs and I highly recommend getting the ToyDozer before starting. Even on thicker carpet the ToyDozer had no problem scooping up large amounts of LEGOs down to the smallest pieces and it made the job of sorting LEGOs far faster and easier than using my bare hands.

I knew the ToyDozer would help Kai clean up his LEGOs too and it fits nicely in a Trofast storage box.

Get drawer storage for smaller pieces 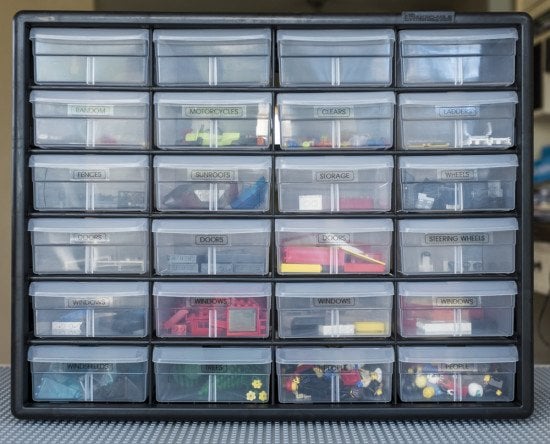 For the specialty pieces in Kai’s LEGO collection I purchased the Akro-Mils 10724 24-Drawer. This is a staple storage solution for all the folks at LEGO and works brilliantly.

The drawers are large enough for most small items but not too large so little space is wasted. It also comes with drawer dividers to organize each drawer into two sides if desired.

My nephew and I divided up the drawers into the following categories:

Now to the heart of the project, building the LEGO organizer using IKEA’s Trofast frame. Using a cordless drill with a small drill bit and a Phillips head screw bit is a must.

My number one pointer is to not over tighten the screws on the ​somewhat fragile ​Trofast frame.​ ​(IKEA also sells a solid pine version of the Trofast frame if desired.) It’s helpful to use a rubber mallet also. I followed the supplied instructions and the frame was assembled rather quickly. 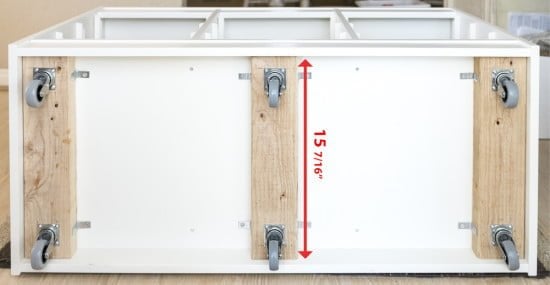 Once the frame was assembled it was time to add the wheels. I decided to use 6 wheels instead of 4 wheels that I’ve seen on other hacks. (More wheels help the Trofast unit roll easier over carpeting.)

Add wheels to the TROFAST

After, I went to my local hardware store to purchase a long 2 X 4 plank of solid pine. First, I made sure the wood was straight and dry from end to end. I had measured the interior width of the Trofast frame and had the hardware store cut 3 pieces of wood to precisely 15 7/16 inches long. At first, I thought I was crazy but, when I got home and placed the wood in the frame, it was a perfect fit. 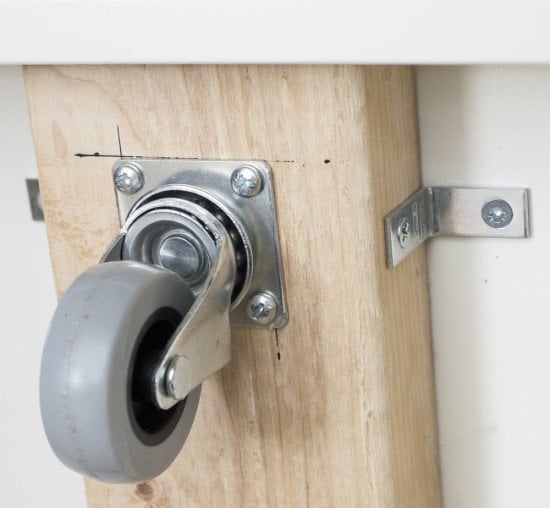 Then, I placed IKEA’s Rill Casters 2 inches in from the ends of the wood. I pre-drilled small holes for the screws and used 2 Part Epoxy to glue the casters to the wood for extra strength.

Add LEGO base plates to the surface 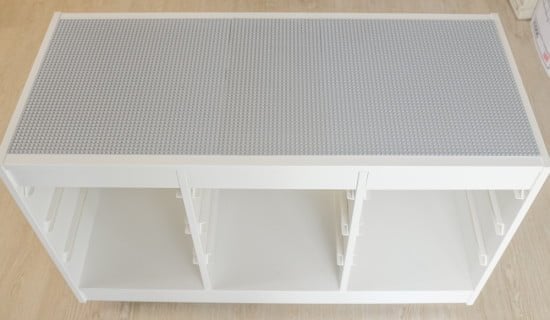 The next step is to cut and glue the grey LEGO base plates to the top of the Trofast frame.

First, align and place two of the grey base plates at both ends of the frame where there is a raised lip, leaving the middle space empty. Take the third base plate and set the left edge against the right edge of the baseplate on your left.

The middle plate will overlap the the baseplate on your right. Where the middle and right base plate overlap mark the intersection with the edges of long LEGO bricks from top to bottom in one continuous line.

After, with your utility knife, score and cut along the line of the baseplate using the LEGOs as a guide. It will take several passes for a clean cut. To finish up the edge, sand it lightly for a smooth finish.

You will now have three baseplates that will fit edge to edge perfectly on top of the frame, one baseplate narrower than the others. It’s time to glue the baseplates down. With blue painters tape, frame the outside edges of the top with the tape.

Secure the base plates with glue

Once taped, check to make sure the three base plates nestle within the taped lines perfectly. Adjust the tape if necessary. Mix and spread the 2 Part Epoxy thinly and evenly covering the entire top surface of the frame using the blue tape as a mask to keep the outside edges clean.

Before placing the baseplates on the glued top, lay out all three baseplates side-by-side. To ensure that the seams between the plates are a perfectly spaced use several LEGO bricks once again but attach the LEGOs over the seams locking the 3 baseplates together.

Center all three locked LEGO plates on the glued top. Once the LEGO plates are centered remove the blue tape around the baseplates. Leave glued baseplates to set before removing LEGO bricks to prevent shifting.

​The next step is to hang the ​IKEA Ekby Jarpen / Ekby Bjarnum Wall Shelf. I chose this shelf because it matches the Trofast frame but also because it has a 7 1/2 inch overhang.

It’s deep enough to hold the Akro-Mils Drawer but not so deep as to interfere with play. Perhaps my favorite find for this project was the IKEA Harte LED Work Lamp. The lamp is small, maneuverable, and looks like it was made for this LEGO organizer. 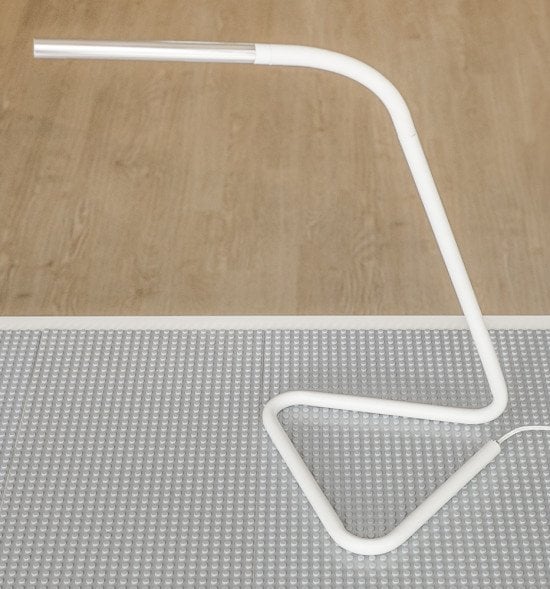 To gauge the height of where to hang the shelf, I placed the lamp on the LEGO table and then measured and hung the wall shelf 3 inches above the top of the lamp. It allows the lamp to be used freely under the shelf but keep the shelf within arms reach of the drawers above.

Get a storage stool to match the LEGO organizer

I finished off this project with IKEA’s Bosnas Ottoman with Storage. I used the ottoman as a seat for my nephew and the cushioned top is quite comfortable to sit on for long periods of time. The fact that the fabric is removable and washable is a plus. The ottoman also does double duty as storage for the all-important Box4Blox LEGO sorter. 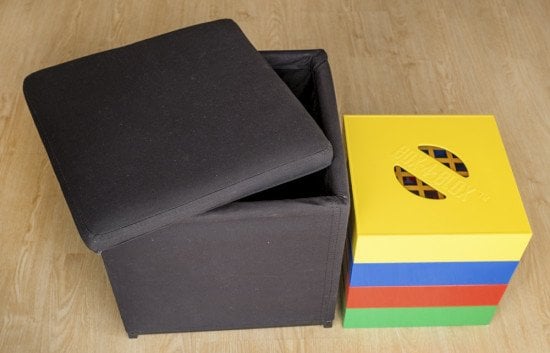 Along with the ToyDozer, the Box4Bloxs aids in keeping LEGOs nice and neat. It consists of four plastic colored trays separated by grids.To use the Box4Blox you remove the lid and load the LEGOs onto the top tray.

You then shake all four trays gently together and the LEGOs are separated, from large to small, through different sized grids between the trays. It’s a clever device and my nephew has fun sorting and searching for particular LEGOs.

Additional pointers for the LEGO organizer

I have one more tip about keeping your LEGOs organized. Even though Kai and I have decided to concentrate on building a LEGO organizer centered around classic LEGO bricks, he does have a couple of LEGO sets.

We agreed that the best way to organize these sets is, if built, just leave them assembled. If you have to take the set apart, store all the pieces with the instruction booklets in separate plastic zip-lock bags.

This way all the LEGO parts will be together with the instructions in one place. We dedicated a drawer in the LEGO organizer to store the ToyDozer and the LEGO sets. 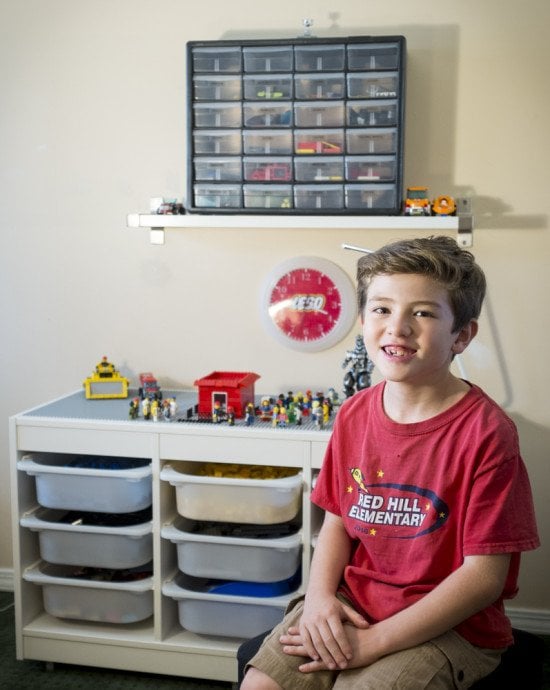 Now that Kai’s LEGO organizer is complete, it’s time to play with LEGOs.

Kai was thrilled that I had taken forty pounds of LEGOs and organized them in way that is simple for him to use. There are no boxes with annoying latches nor lids to get in the way.

Just as important, the LEGOs can easily be sorted, cleaned up, and put away. With this project at an end I hope it marks a new beginning for my beloved nephew.

Here’s to Kai exploring the deepest corners of his imagination and to dreaming about the possible and impossible.

For his first project at his new LEGO organizer, I asked Kai if he would build me something special. His response was epic. Godzilla vs. the LEGO People, complete with an outdoor refrigerator in case anyone got hungry. Grrrrr…