Go big! Dress up your wall bookcase with a mural

One thing I’ve always wanted in my ideal house is a library. I love to read, but when I first moved out of my parents’ house years ago I gave away most of my book collection. It simply wasn’t practical to move it around and try to fit it in apartments and houseshares.

My husband and I bought and moved into an incredible house about a year and a half ago. While we don’t have a dedicated reading room we do have a large windowless wall in our living room. It’s ideal for a wall bookcase I can fill again, now that we’re here to stay.

We originally selected FINNY over BILLY because it’s much cheaper. That ended up being fortuitous as BILLY would have been wider than the mural panels come shipped and this idea would’ve been prohibitively difficult for me to execute.

When we moved in we set up three FINNBYs for the books I had. But as I have collected more they stopped fitting. It was time for more shelves. I’d originally planned to add them one at a time, but I saw someone else’s hack for fabric or wallpaper as a background and was intrigued.

My one concern about eventually lining up seven FINNBYs in a row was how heavy all the black might look. Backing the bookcases would be a good way to keep them from feeling so dark.

Because I would have such a wide space to work with, I wanted to use it to its full potential by doing a mural instead of just a contrasting color or consistently repeating pattern. (Another thought I had was painting each of the backs a progressively lighter shade for an ombre effect, but I’m glad I went with this.)

I ended up selecting a deep space starry sky design, in part because I loved the blue/purple colors (and they weren’t so bright they’d ‘fight’ with the vividly colorful rug we have in the living room), but also because the more abstract pattern wouldn’t require me to be too precise in my application. 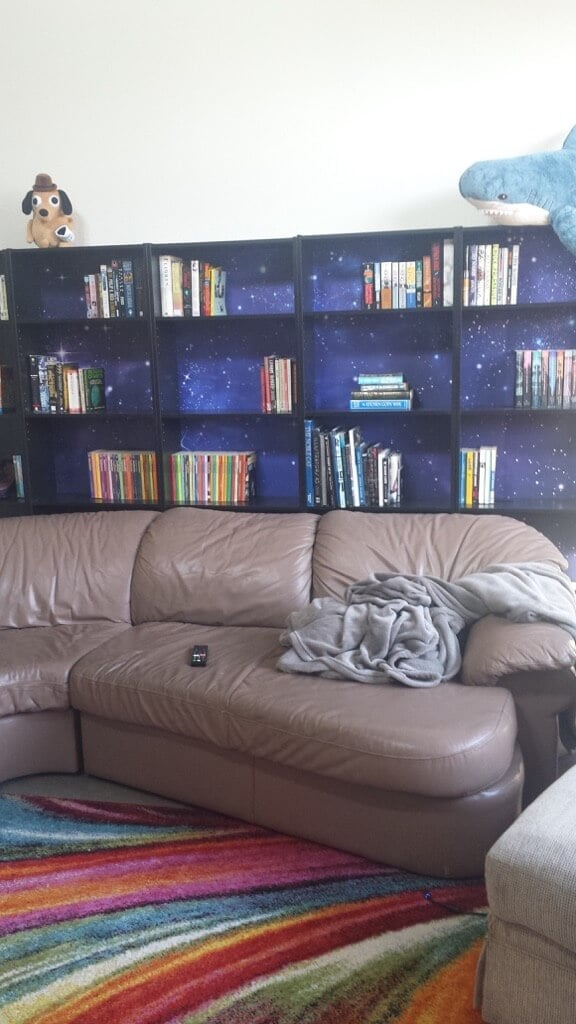 FINNBY bookcases are ideal because they’re just a little narrower than the widths of the available mural panels. However, they aren’t as tall, so you’ll need to make some editing choices as to which part of the image you want to use.

Because our wall would fit seven bookcases but the mural comes in six panels, I opted to cover the center five and leave the outer two black for symmetry.  This hack would probably be optimal with six bookcases in a row. (But we didn’t want to leave a larger portion of the wall empty than needed. And I didn’t want to sacrifice my future book space!) Having an extra mural panel also gave me some peace of mind as I did have to trim and install one panel into an already-built bookcase. So having a spare in case I borked was reassuring. 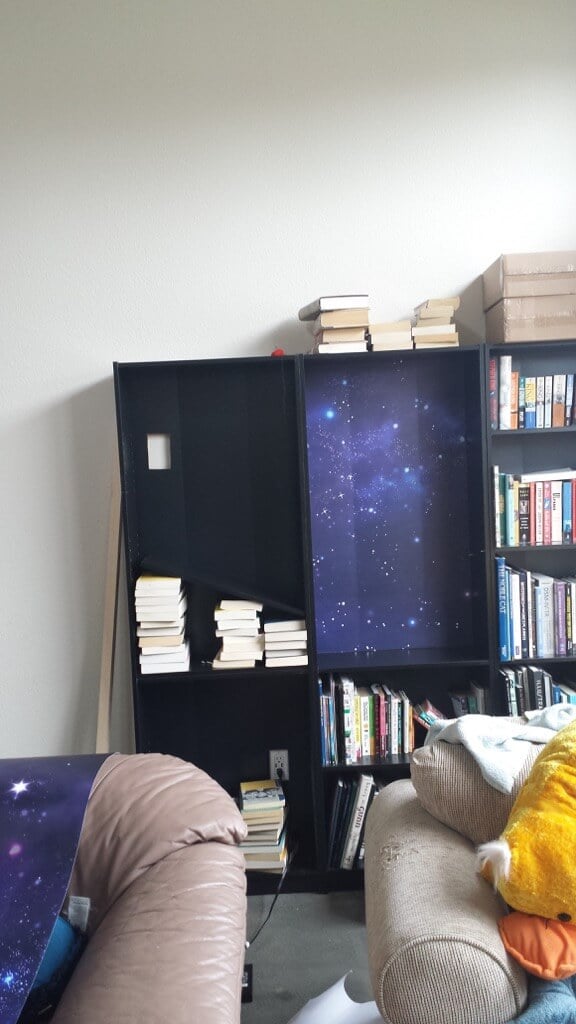 It was my first time installing these sorts of vinyl panels. I’ve only done small decals in the past. But it wasn’t too bad. And it was easy to get rid of the few air bubbles I accidentally made. Just poke the bubbles with a pin and flatten them back out.

I watched a couple videos on YouTube that were very helpful. I would peel the backing off a bit of the top, line up the whole panel how I wanted it. Then, use my towel-holding hand to press the vinyl down side-to-side. Next, slowly peel the backing further while continuing to seat the vinyl with the towel. 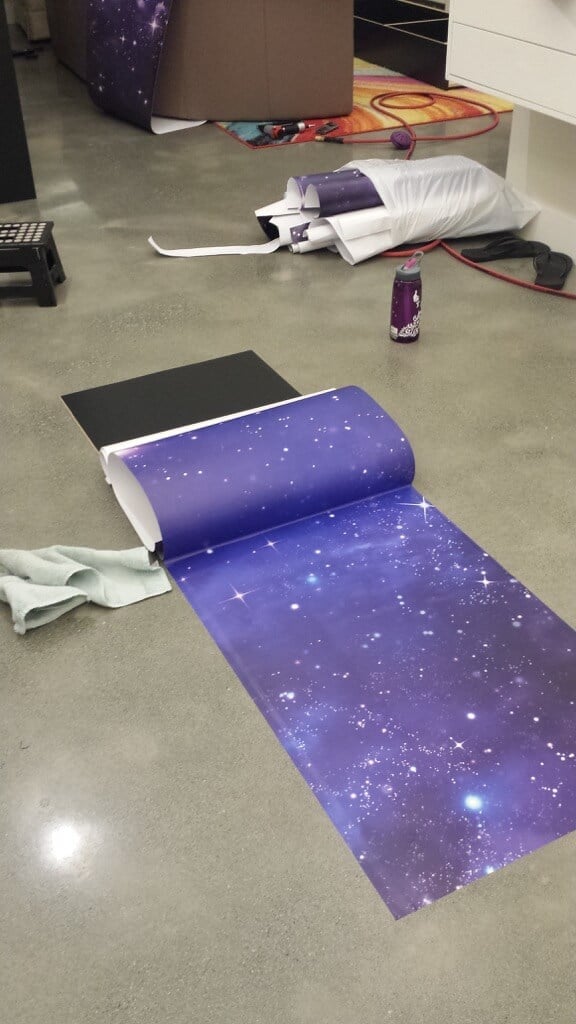 After sticking the panel on the entire back I trimmed away the excess from the edges. Then built the bookcases as per usual. (Used an electric screwdriver and a nail gun instead of the IKEA hand tools to save some time). We lined up all the completed bookcases against the wall before lagging them in as we did have to shim a couple of them off the floor for them to square up well. 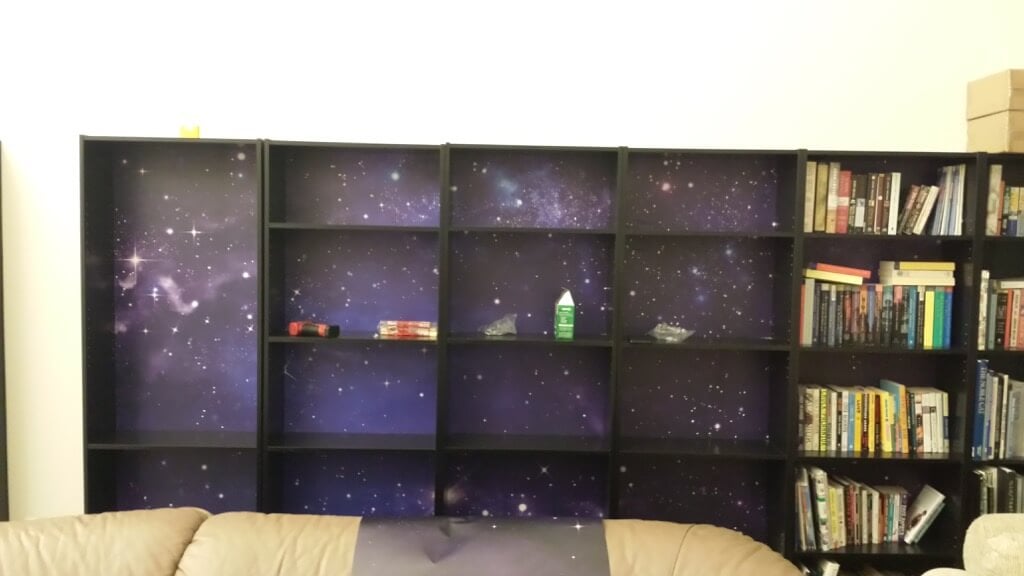 If you have outlets in the wall you still want to use, measure and cut the access holes from the bookcase back panels first.

My husband masterminded measuring and cutting the access holes for the outlets. He also swapped them to USB outlets before we put in the bookcases as he knew it would be extremely difficult if he ever wanted to do it later.

He did slightly misalign his first outlet hole. But we rotated the bookcase back to try again as the hole ended up covered by the vinyl panel anyway so people only know it’s there if I tell them. (Like I’m now telling everyone, apparently. Sorry!) You can see the “oops hole” in the upper left corner, taunting him.

As we have rather tall baseboards, we used furring strips of the same 1/2″ thickness painted black to keep the bookcases parallel to the wall. From the side, the bookcases appear notched for the baseboards as well, which gives them more of a built-in look. 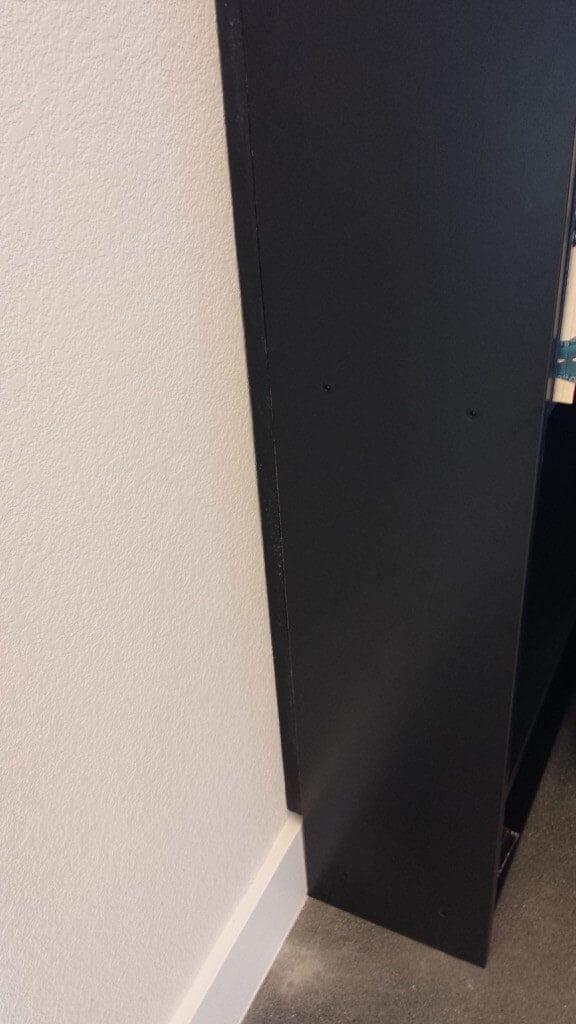 We also made ‘frames’ and nailed them to the wall around the outlets for the outlet access holes to rest against. 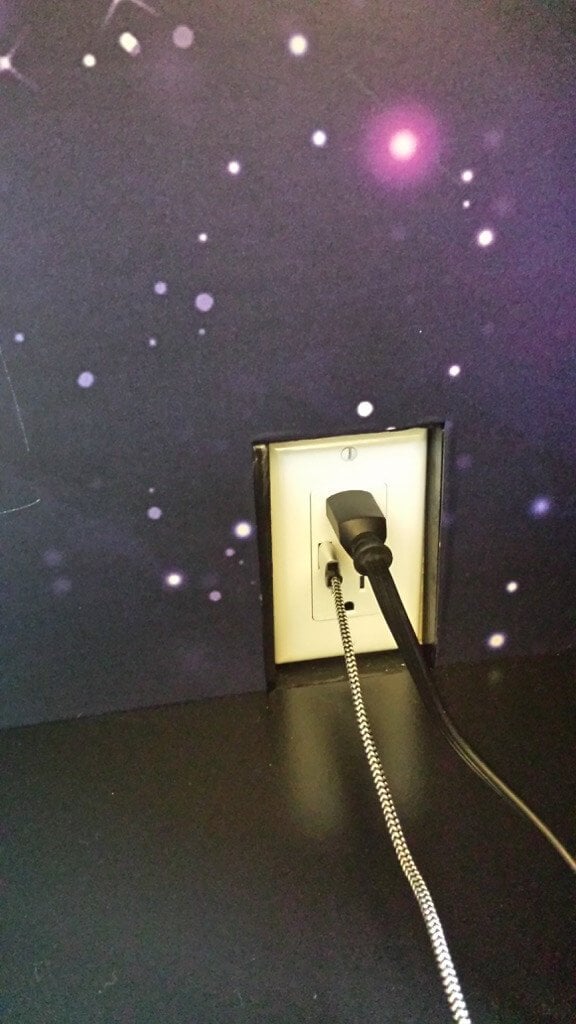 The furring strips are also great because we used them using the included brackets to attach the bookcases to the wall. We just sank two self-tapping drywall screws per bookcase – one on each side – through the bookcase backing and furring strips right into wall. We were careful to position the screws behind the horizontal bookshelves so they don’t show. It’s easier than the included IKEA brackets – no ladder needed – and everything feels very secure. 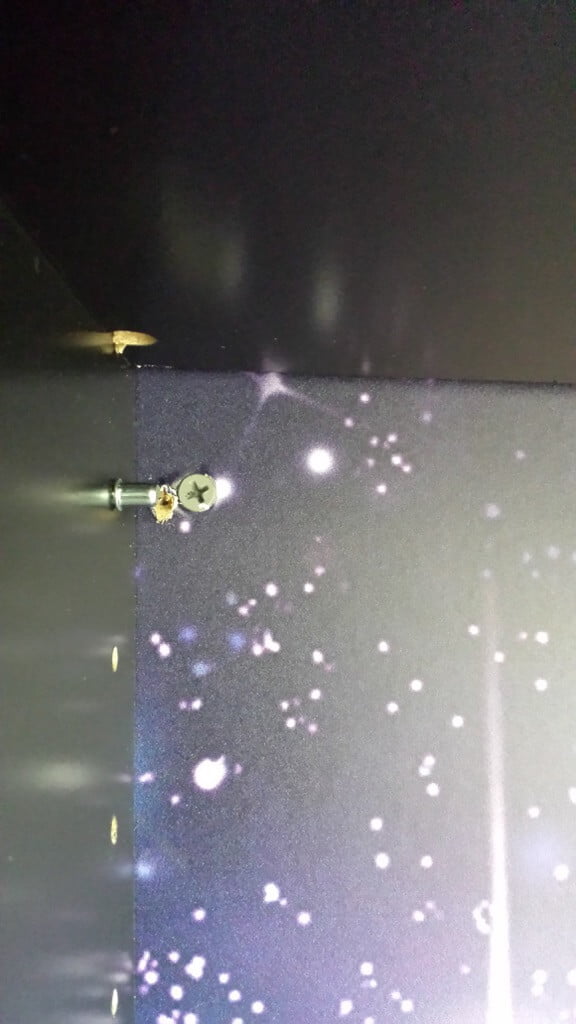 How long did it take?

All in all, the project took about a full day of effort for me. About a half a day for my husband, who painted and trimmed all the furring strips to length as well as prepping the outlet holes and setting up a clear workspace for me. Then, he shimmed and lagged the bookcases into the wall when I had everything assembled.

He’s not even really a book person and was a bit skeptical when I tried to describe what I wanted to make. He could tell how excited I was about this so he put in the effort too. Because he’s awesome. (Times are approximate as the work was spread out over the course of a week, and do not count the visit to IKEA which is of course an adventure in and of itself.) 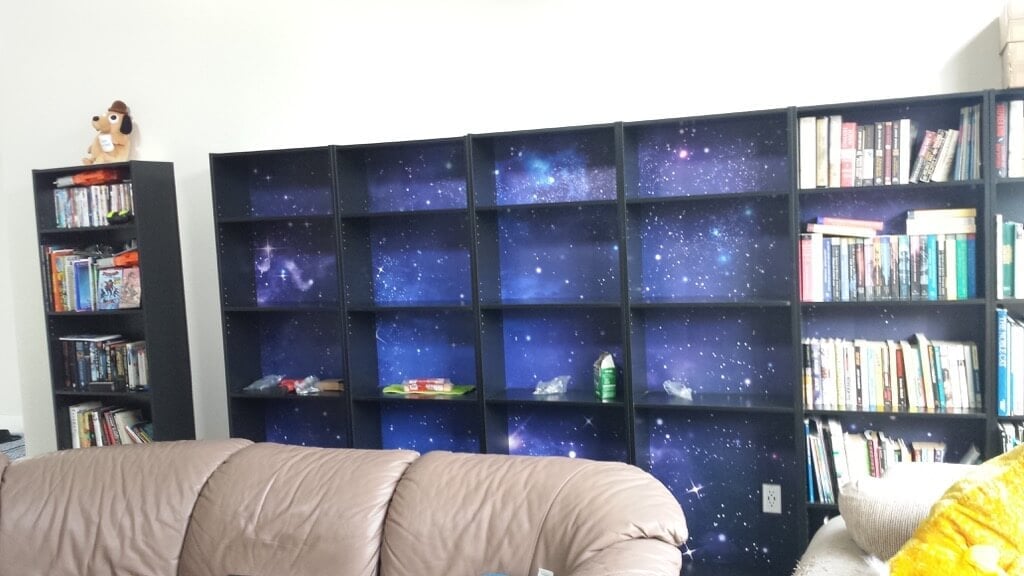 Materials ran less than $350 total. Seven FINNBY bookcases at about $30 each, $100 for the mural, plus hardware and furring strips and paint, none of which are particularly spendy.

Wall bookcase with mural all done!

I absolutely love how this turned out. And now that my husband can actually see what I was trying to describe for himself he’s been won over too. As my slowly re-growing book collection doesn’t yet fill all the shelves, the mural helps them not look so empty.

It brings another dimension and layer of interest to the room, and when my dad – a custom home architect – saw it in person he loved it so much he’s trying to figure out if he can pull off a similar wall in a home he’s currently designing. The wall bookcase mural is the first thing anyone sees when they come through our front door, and when visitors come in it’s generated more than a few wow moments. 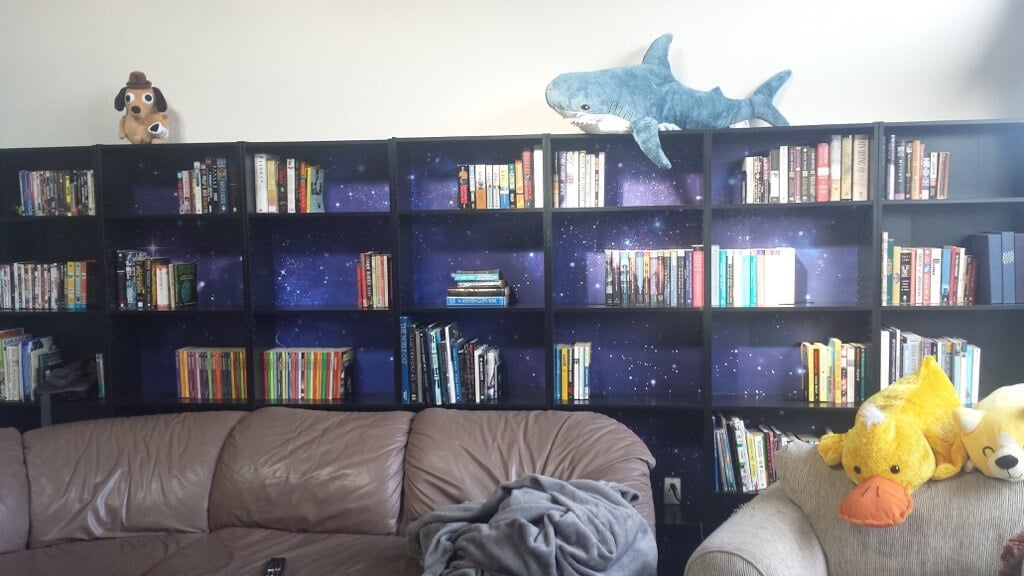