The zen of laptop desks

I’m loving what Siew Lian did to the Babord shoe rack. Perfect for sitting cross legged while sipping green tea. 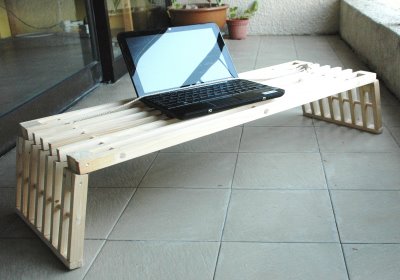 She says, “My husband recently began working a lot at home, displacing me from the desk and PC. Forced to use the laptop for longer periods, I started to look for a laptop desk.

I had given away my nice pine Ikea breakfast tray with foldaway legs and couldn’t find it again in the store, and the Bagn breakfast tray is too flimsy.

I was considering the Benjamin stool hack, but decided against it due to the stool’s price in Malaysia (RM59 which is about US$17 but probably equivalent to maybe US$40-50) and the fact that it couldn’t be folded flat.

Then I remembered I had hoarded away a couple of Babord shoe racks (about RM10 or US$3 each) to use as shelf inserts and decided to make a laptop tray out of one.

I used one of the rack’s two shelves for the tray itself, and the other shelf to make the legs.

I sawed both ends off the shelf at a height of about 15cm for the tray legs. The ends are best for the legs, because they’re held together by the dowel rod running through the slats.

I used one of the slats from the remainder of the shelf to reinforce the bottoms of the legs.

A bit of glue and some nails later, the three pieces were ready to assemble with small hinges. (I bought some nice brass-finished ones from Ace hardware) 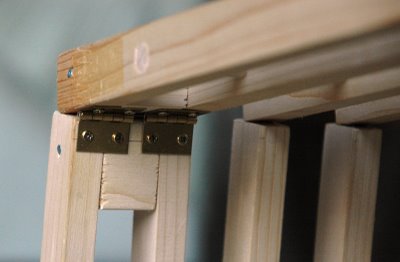 Tip: Don’t attach the legs square to the tray because it will tend to collapse to either side. Instead, the horizontal top edge of each leg should extrude from the side edge of the tray by one centimetre or so, so the legs when open are at an angle to the tray. This way when you use it, the legs are “wedged” open. 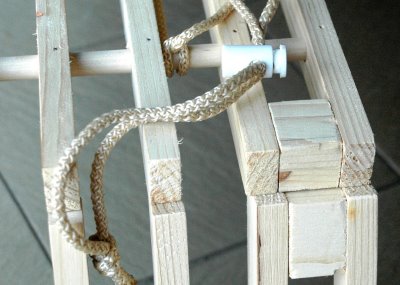 Another tip: Round off the long side edge of the tray. It’s not splinters, just that the square edge can be tough on the under side of your wrists.

I was a bit worried the laptop might tip over when I move so I got a bit of braid, looped it around the dowel rods and ran it through a drawstring cord lock. (This might have been unnecessary, the laptop’s rubber pads sit in the gaps between the slats, and the weight of the laptop has kept it firmly on the tray. And don’t close your laptop with the braid holding it — it could break the laptop hinges).

What I love about it is its length. I’ve always found other shorter trays a little constricting after a lengthy period. Now I can sit (cross-legged even) on the sofa and surf!”