Chris didn’t have to splurge to get the dream play kitchen.

Chris says, “I’ve been looking at play kitchens for my daughter for a few months when I fell in love with a vintage style one from Pottery Barn Kids. Beautiful, but at over $700 I thought there had to be a cheaper way. So after some research I decided on an Ikea hack. I used two Aneboda night stands (one for the oven and one for the sink) and an Odda chest (for the fridge). I modified the pieces with MDF and finished plywood, sanded the exterior and then painted them yellow. The oven has Snodd knobs and Lindsdal handles. The burners are Panna coasters. The fridge has a Lansa handle, and Omar baskets on the inside of the door. 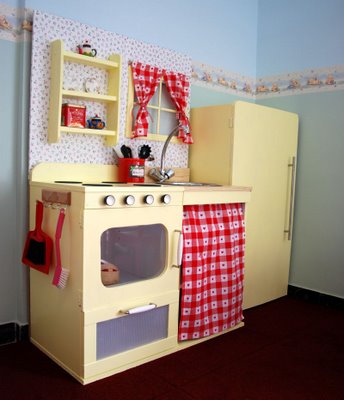 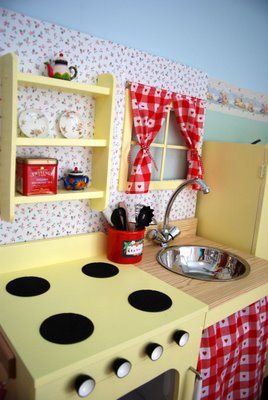 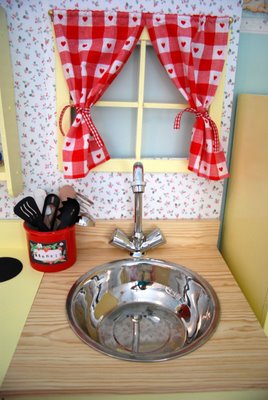 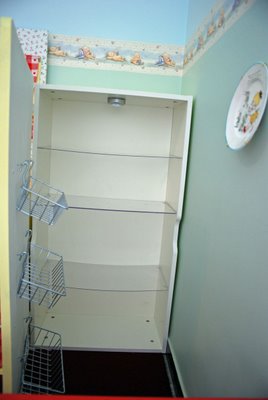 She says, “I love the look of the old school plywood kitchens but could never afford or find a nice vintage one.  So, I took a Rast table and built off of that.  First I added a sheet of 1/4 inch birch ply to make a back. Then I used the scraps to divide the shelf inside into 2 halves.  I used another scrap to make a door and 2 to trim out the place where the knobs would go and for the “kickplate”.  I spent 10 bucks on the wood (I asked if they had any scraps they could sell in lieu of a large sheet).  They did the cuts for free. 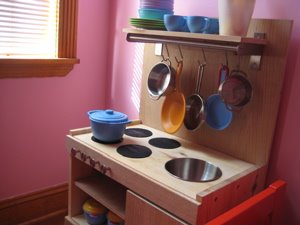 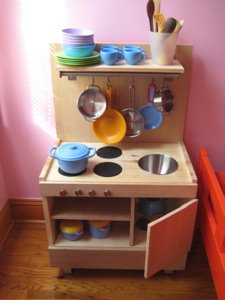 To assemble it I used wood glue and screws.  I added knobs (Attest) to the front and coasters (Panna) for burners.  I cut a hole in the top and used an old bowl I had lying around for a sink.  For the shelf to store dishes I found a small Grundtal shelf in the bathroom section.  I cut another piece of scrap wood to make the shelf more suitable for storing items.  A few Grundtal “S” hooks are perfect for hanging pots and pans.  The spoons etc are stored in a pen/pencil holder (Fniss).  It was all a little low so I bought legs (Numerar) to bring it up to play height.  I had planned to add a handle for the door and a tile backsplash, but I ended up leaving it as is.  In all I spent less than 50 bucks and a few hours of time.  My daughter loves it and so do all her friends.”

Other play kitchen hacks you may want to check out:
– Vika Furusund play kitchen
– Cooking for kids
– Play kitchen for under $200