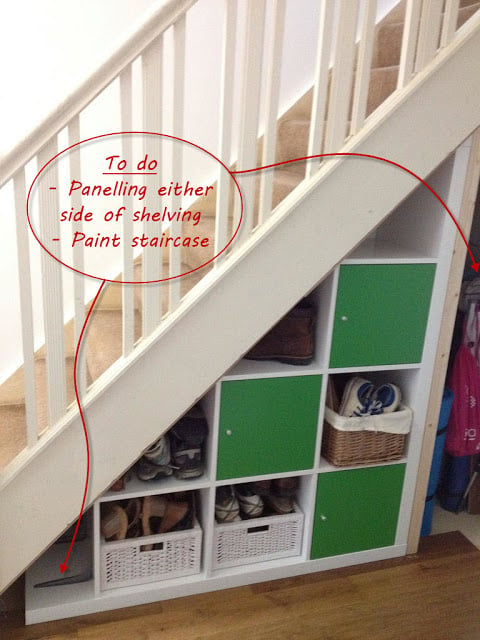 Description: The under-stairs area in our house was an awkward cluttered cupboard, but had the potential to be a great storage area in the hallway if it could be repurposed with some clever Ikea hackery. Expedit looked ideal…

Step 1: Design
I created a 3D model of our staircase and the full Expedit shelf unit in SolidWorks, then modified both of them to work out where I should cut down the Expedit, and get a feel for how the thing would look when done. In hindsight it’s a fairly simple modification but creating a 3D model was a useful exercise to fully understand how things would work before attacking the Expedit with a saw. It was quickly apparent that it would need substantial reinforcement after removing two of the four outer panels. 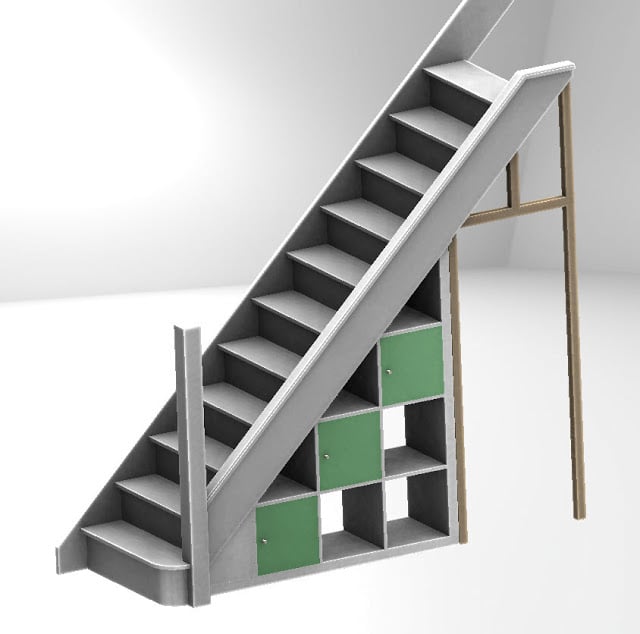 Step 2: Cutting down Expedit base
First I marked out the cut and scored the laminate surface with a sharp knife – then carefully cut with a panel saw.

Step 3: Assembling the first row
After fixing the base to the side panel I added three of the upright dividers, and also fixed in one of the door inserts to brace the corner. As a precaution I used wood-glue to fix the dowels in place. 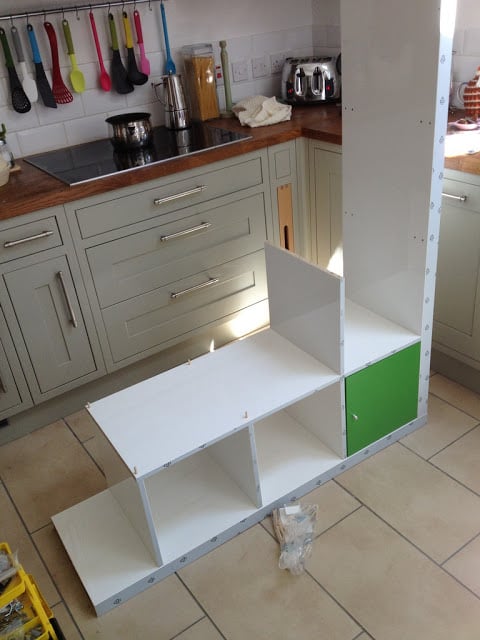 Step 4: Add the first shelf
I inserted the dowels a little way through the shelf to locate it exactly against the upright, so it could be marked up before removing it to score then cut to length. Made a minor mistake here when fixing the shelf in place – I forgot to cut down the last upright dowels before inserting them, leaving them exposed and requiring cutting down later (much more fiddly) – lesson learned for the next row!

Step 5: Repeat for the next rows until you get to the top
I fixed the door inserts in place using cabinet connector fixings to provide extra rigidity.

Step 6: Add reinforcement shelf-brackets
Because the Expedit will be without two of the four structural outer panels it needs reinforcing. The missing upright can be partially replaced with a couple of shelf brackets. My design means this will be covered up when under the stairs, so I’m not too worried how this area looks. 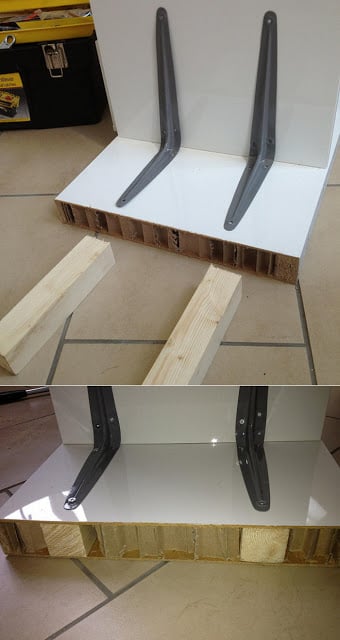 As with a lot of Ikea furniture, the base panel isn’t solid – instead it is a honeycomb of cardboard with a thin outer structure. This means there is nothing solid to fix the shelf brackets in to. To remedy this I cut two lengths of 44mm timber to insert inside the base. 45mm would have been a perfect fit but 44mm was good enough, and readily available. I carefully cut away the cardboard honeycomb using a sharp knife and then a chisel when the knife wouldn’t reach, creating two slots for the wooden battens to slide into. The shelf brackets could then be fixed to the base and upright (being careful to use short screws on the upright thinner walled panel!).

Step 7: Add reinforcement L-brackets wherever possible
I added L-brackets to the back face of the Expedit wherever I could, taking care to drill pilot holes square to the back, to avoid screws puncturing the surface.

Step 8: Cut down spare panels to blank off back of cabinet
I marked up and cut the left-over small panels to fit in the back of the cabinet – for the triangular areas and those that don’t have a door insert. I then fixed them in place using a few more of the L-brackets. 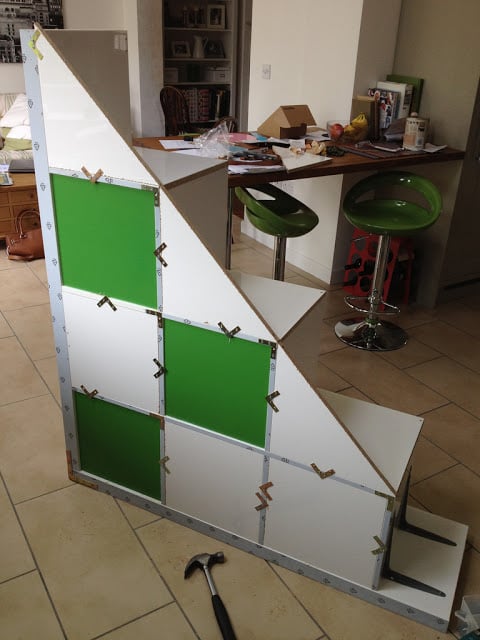 Step 9: Cut and fit filler piece to upright panel
The upright panel wasn’t quite long enough to fill the void under the stairs, so I carefully cut the end off the other (unused) upright panel. This could then be attached in place, neatly filling the gap.

Step 10: The hack to the Expedit is all done! It is positioned under the stairs but not fixed in place, in case we need access to the cabling in the void behind it. Two jobs remain: panelling the areas to the left and right of the Expedit, then paint the staircase, but that can wait for another day…

See more of the under stairs Expedit storage.