25 things on the “IKEA bring back” wish list. What’s on yours?

For their 75th Anniversary, IKEA brought back some of their old favourites in the GRATULERA series. But wait, those are not the only discontinued IKEA products we wish the yellow and blue mothership will bring back. When I posted the question to readers some time ago, I received a slew of responses. I’m sure you have one or two (or many) items you hope IKEA will reissue. Add to the our big, big “Discontinued IKEA Items Wishlist” in the comments section.

Earth to IKEA, pleeease beam these discontinued IKEA products back.

Here are 25 discontinued IKEA items on our wishlist.

(It’s a long one, in no particular order)

#1. “The Kivik single seat … or at least the freaking slipcovers! Grrr… ” ~ Neva

#2. “I would love to see them bring back the Jerker desk. I have two. One I use as a desk and one I use as my electronics workbench). Not only are they big enough to support my three monitor computer setup, but because the uprights have holes every 1.5 inches they are easy to hack. I don’t think I am alone in wanting to bring back this discontinued IKEA product. There was a facebook petition not too long ago and I don’t know of any other desk with its own fan site.” ~ Steve

I don’t think I am alone in this wish, there was a facebook petition not too long ago and I don’t know of any other desk with its own fan site.” ~ Steve

“I would love to see the Jerker desk back! It is modular and well made. And can be made to be a stand-up or sit-down desk (adjustable but fixed height). They make an excellent workbench.” ~ Wayne Yoshida

#3. “Hi, there was a limited edition wallpaper, which I can’t find anywhere- can’t remember the name, but a multicolored zig-zag effect, very modern. Not seen anything like it since.” ~ Elaine

I think you are referring to the limited edition IKEA BRAKIG wallpaper. I was lucky enough to snag 3 rolls before they ran out. 🙂 ~ Jules 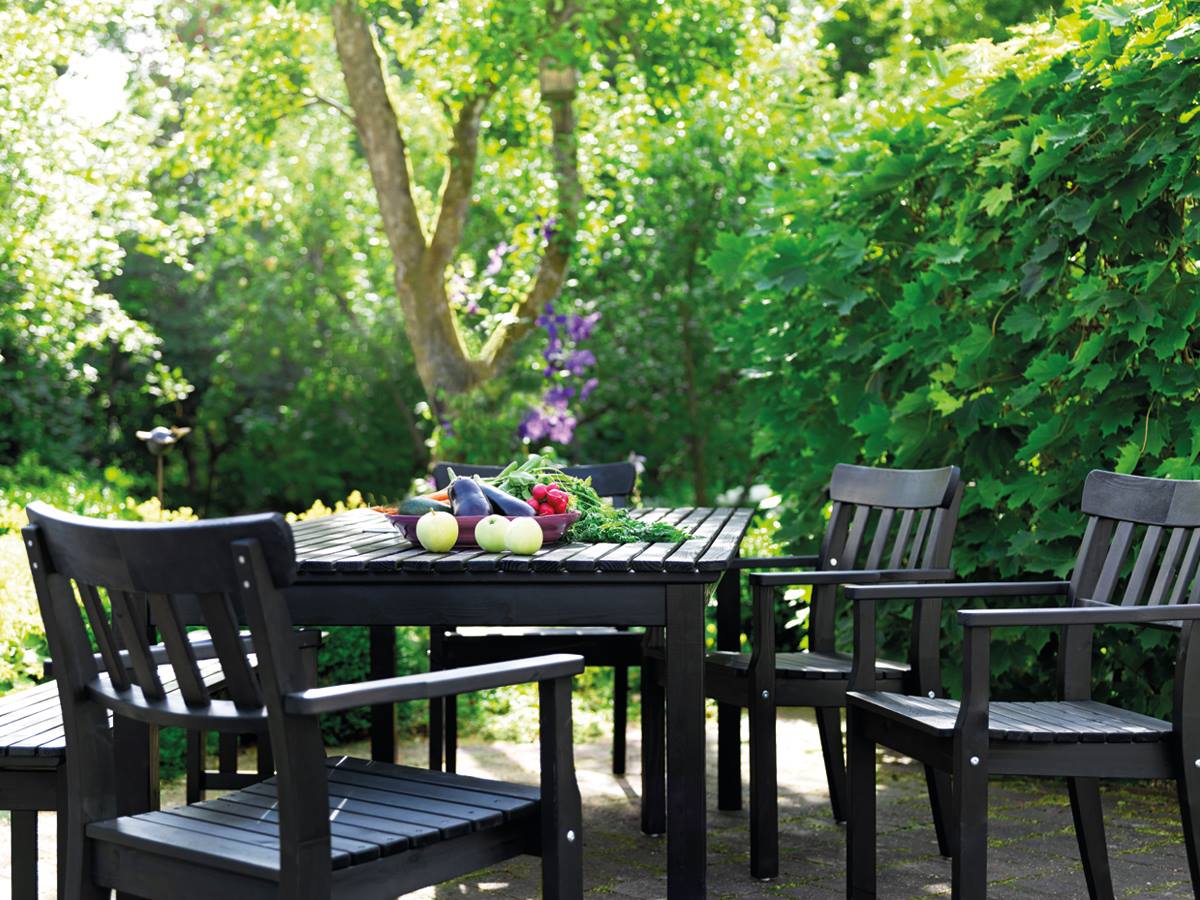 #4. “What I’d really like to come back – I never will understand why they dropped it out this summer – is the Ängsö garden series, especially the BIG garden table which is, no; was the only one at 1 by 2 meters. Really a pity :-(” ~ Stefan

We want discontinued IKEA favorites to come back

#5. “The non-existence of BENJAMIN at the IKEA stores hurts a lot these days …! When I wanted to complete my two stools with another two couple years ago — ha-hah! My theory on phasing them out (which probably applies to many other discontinued IKEA items, too) is, that IKEA rather withdraws the item from their catalogue than raise its price significantly: The BENJAMIN cost about 17 Euros back in the day — which is almost ridiculously little money for that kind of quality in material and built you got.” ~ uwe s. / Germany

The BENJAMIN cost about 17 Euros back in the day — which is almost ridiculously little money for that kind of quality in material and built you got. ~ uwe

#8. “One thing I miss – have missed for so long I’ve even lost the bookmark to the product page, so I don’t know its name. 🙁 Right now, we have the RISÖR room divider – very nice and classy, but also expensive at nearly € 100. There used to be a much simpler one: just three metal frames (with crossbars) hinged together, and a simple piece of cloth stretched over each of the crossbars. It cost something like € 30 or € 40, and with the simple construction, it would be easy to pick your own fabric and use it for the room divider as well as pillowcases and other details.

That – typically IKEA – simplicity, and adaptability have disappeared and there’s nothing similar to replace it. (I do not consider RISÖR a replacement as it has neither its cheerful simplicity nor its adaptability.)

And, for quite a while, I could not even find *any* room divider at that price point – everything was much more expensive – and I could not afford them even if I wanted them for design (which I didn’t!).

And yes, I want it back! I could use 2 or 3 of them, even (and would buy, and adapt, them when the product came back).” ~ Marjolein

#9. “I would like the RONDO dinner set back. Some of mine are getting chipped. It was a wonderful design.” ~ J Palmer, Canada

#10. “If there are any chances that we could request any discontinued IKEA item would come back, I would choose IKEA 3-Seater Karlstad. I agree with you that this sofa definitely should come back.

Well, I have been using Karlstad 3-Seater for year 5 now at our rented house somewhere in East Malaysia. And now we bought a house in West Malaysia and I’m always thinking that it would be good if Karlstad was still in production.” ~ Zull.

And now we bought a house in West Malaysia and I’m always thinking that it would be good if Karlstad was still in production.” ~ Zull

#12. “I’d like to see this picture frame come back – NYTTJA 8.5 x 11. I have a photo gallery in black and white frames that I add to every year or two. I found out last year that they are no longer available.☹️ I really like their basic look.” ~ Kathey

Discontinued IKEA products … we need them to finish our projects

#13. “I should like to see the return of red-brown as a colour option across the Hemnes range. I have a Hemnes Console table in red-brown which sits well with my other furniture which is antique walnut. I should like another to hack for hi-fi storage but it is discontinued in red-brown.” ~ Kim

#14. “Like to see the Udden kitchen collection back.” ~ Lucas Kallinosis /Australia

#15. “I would like to see the Varde cabinets back…just love them!” ~ Gretchen

#16. “I do not the name anymore, but I loved a seat in the seventies: Just a metal frame and a textile seat and back, it came in orange, yellow and dark blue.” ~ Michael köhler

#17. “I’d like to see Grytnas glass door come back so that I can start a project on a low cabinet.” ~ Dilip

#18. We love the Antonius series – also the original wooden step stool (the new one is thinner and shorter but the original was more stable.” ~ Avriel

Some are just too good to say goodbye to

#19. “More patterned slipcovers for the Ektorp sofas. There used to be a much wider selection.” ~ Marianne

#20. “IKEA needs to bring back the LACK bookshelf. It was so versatile and made a great media unit on the wall. Also, the BESTÅ panels for wall mounting that were made of glass need to come back. It hid all your cables and made wall mounting large format TVs much easier.” ~ Kyle Mangano

IKEA needs to bring back the LACK bookshelf. It was so versatile and made a great media unit on the wall. ~ Kyle

#21. “YES!!! The Mandal headboard! I have been so bummed about that one! I bought the bed and the headboard was out of stock. Then, I kept waiting for it to come back and was so upset it never did!” ~ Amy

#22. “YES! YES! I would love to see the Lerberg media storage racks come back!! Perfect for CDs, DVDs, and paperbacks! I love them and should’ve bought dozens when they were still available. Originally costing $CDN 5 or thereabouts, they’re now being flogged on eBay for $US25 or more apiece – ouch!” ~ Rebecca

#23. “The product I am dying for them to reissue is the PS 2017 room divider, photo above. It was announced, came out VERY briefly, and then was suddenly discontinued. The stores don’t seem to know anything about it. I really wanted to buy a few of these for our home studio, where we record music and my voice acting jobs. It looked to be a great sound baffle!” ~ Amy Guskin

#24. “For me, IKEA Ps Ellan (rocking chair) and Lindmon (shutters) should come back!” ~ Christine

#25. “I would love to see the Markor and Leksvik lines again. They are both very different styles but I love them. Also, I’d like to see the return of the Antique stain (Leksvik had an entire line) in just about anything (hehemmmm Hemnes maybe?). If I can’t get the matching pieces, at least the matching stain would work. I find the black/brown colour they’ve shown for a few years too dark (the old dark brown of the Markor was nicer).” ~ Elizabeth

I’m quite sure this isn’t an exhaustive list. What about you? Do you have any discontinued IKEA products you would love to see (and buy) again? Tell us in the comments below and let’s keep our fingers crossed someone at IKEA sees our wishlist and flicks the magic wand.